There are people who will tell you that the Jenner sisters’ mobile game Kendall and Kylie (or KKgame, to borrow its more descriptive and useful hashtag), released last week and already breaking records, is an obvious re-skin of Kim Kardashian Hollywood — basically the same game with a fresh coat of paint. The people who tell you this are wrong and broken inside and they are not your friends. They are also probably very bad at social media.

Kim Kardashian Hollywood (or KKH), is almost two years old — Precambrian in mobile-gaming years — and it would make sense for publishers Glu Mobile to want to find the simplest way possible to goose the success of their relationship with the Kardashians. But while there are many (MANY!) similarities between the two games, what Glu has created in KKgame is not just another boutique celebrity-brand-awareness play, or merely a slight improvement on past successes. It’s a tongue-in-cheek exploration of the way social media opens new opportunities for us, and a creative toolbox that actually, against all odds, makes social media fun again.

KKgame will definitely feel familiar to anyone who’s played KKH. In both games, you start off as the new person in town, with no friends and few prospects. You customize your character with different outfits and hairstyles, you buy things like apartments and dogs that give you energy when you pet them, and you network and meet people who offer you missions that help you progress through the game.

I’ve played KKH every day since it came out. I’ve written two books of fanfic set inside the game. I love that game with all my heart and will go to the grave defending it. But it only took about five minutes of playing KKgame before I realized, with a slowly dawning horror, what an ancient, old person’s game KKH actually was. 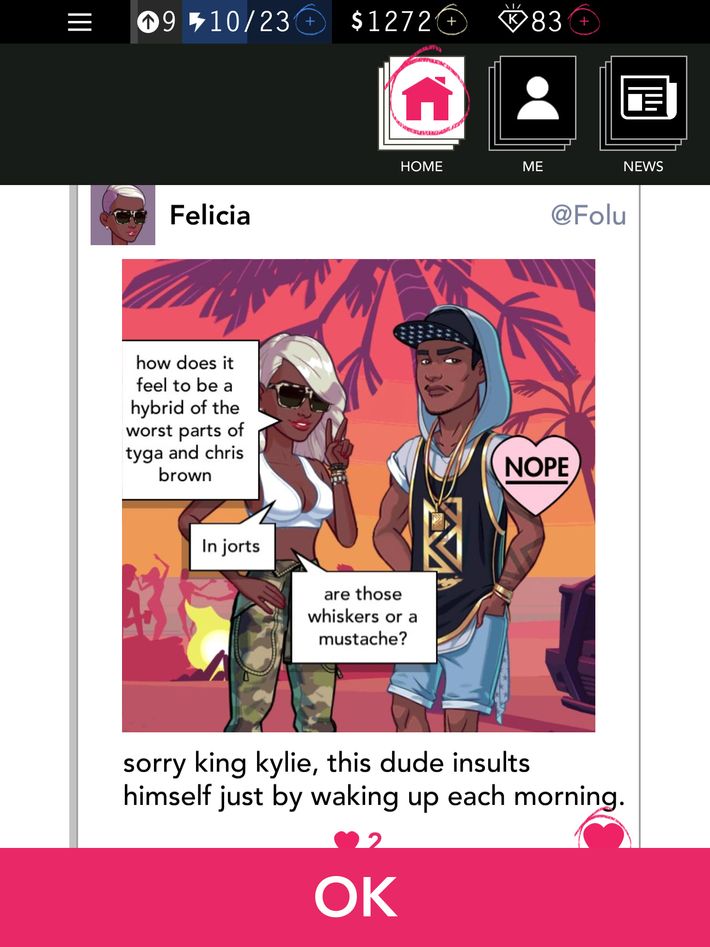 In KKH the goal is to become a famous celebrity with movie and TV deals and clothing lines and lots of real estate. Basically it’s a game about managing your ~career~, which is a very adult thing to care about. You’re always busily traveling from one job to another, while an old white man named Simon calls you (!), on the phone (!), to tell you what to do next. Any regular human who goes through great lengths to never ever answer their phone will immediately recognize how unrelatable and old-fashioned this game mechanic is.

In KKgame, no one calls you (thank GOD). Your friends text you about things that are happening, and you can show up? if you want to? But your progression through the game isn’t really about your career, it’s about gaining social-media skills and managing your personal brand. Which is an infinitely more realistic and interesting goal, and certainly more actionable and relatable than what Kim is offering.

When I first realized that the game has its own social network, I became overwhelmed. I have enough stress in my life just trying to keep up with my actual social media. Playing games is supposed to be the thing I do to keep myself from continually refreshing my Twitter timeline. Now in order to play this game I would have to post fake selfies and fake-like my fake-friends’ fake-posts? I was dying.

But! It turns out! Managing your social media in KKgame is super-fun and surprisingly creative. It’s not only the best part of the game, it’s arguably one of the most fun and weird social networks in existence right now.

The in-game social media is essentially Instagram with a more creative tool set. You select your pose and your “emotion” (what your face is doing), your “crew” (who’s in the picture with you), your stickers (cute little decorations that will be familiar to anyone who’s ever messed with purikura apps), and most important, text bubbles, which allow you to give your characters dialog. 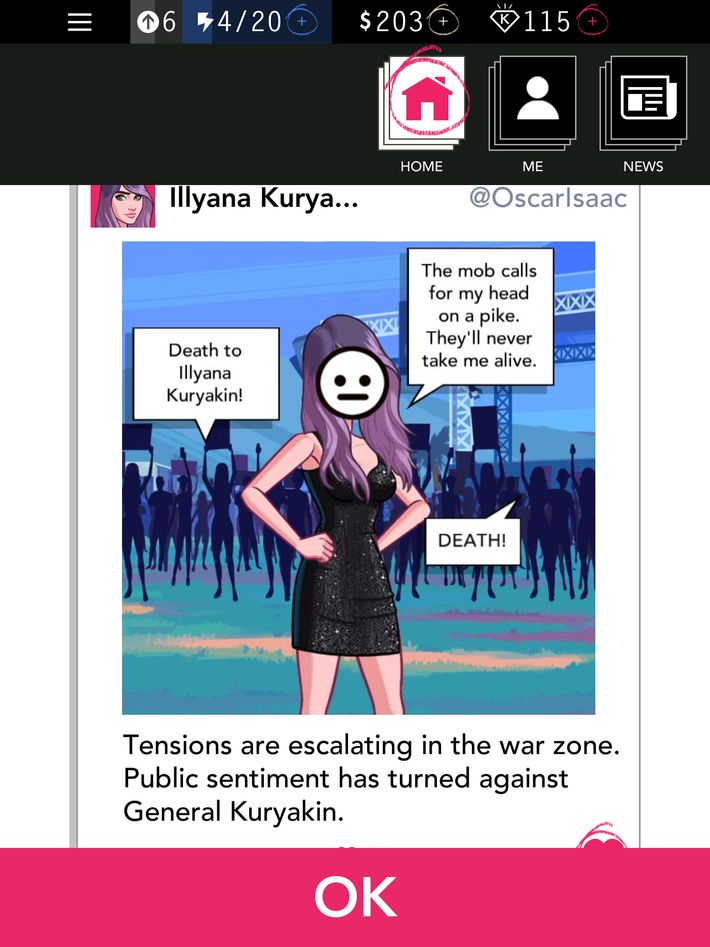 Ever since launch day, people have been doing weird and interesting things with the social-media feature. I often find myself opening the game just to scroll through my timeline and post a selfie for my character, not even bothering to go on a date (“I love what you’re wearing on our date,” your date says, staring at her screen and tapping out a text on her phone) or read any of my friends’ annoying texts. (“Don’t reply” is one of your character’s main responses when someone texts you.).

Because of the emphasis on social media, the things you do in the game are never just about the action — they’re about the way you frame it. You’re not helping out around the salon, you’re posting a vlog about helping out around the salon. You “pose for pic.” You “engage fans.” You “act professional.” The implication is that social media isn’t just about what we do, but how we’re perceived doing it. We’re constantly creating layers of value and implied meaning by allowing others to experience our lives with us, and the game reflects that.

On the surface it would be very easy to dismiss this as simply another celebrity- and fame-obsessed mobile game, but KKgame offers a uniquely insightful perspective on the way social media continues to shape who we are, making it a surprisingly creative playground for experimenting with narratives online. It’s great and weird and I love it and if you don’t like it you might be too old to get it. Don’t reply.

Why Kendall and Kylie’s New Game Is So Addictive