Dr. Philip Zimbardo is best known as the architect of the Stanford Prison Experiment, in which a group of randomly assigned “guards” in a simulated prison quickly began treating their “prisoners” in a shockingly barbaric manner. The experiment, which was called off after only six days despite having a planned two-week run time, shook the foundations of social psychology and became a mainstay of psychology textbooks. As a result, Zimbardo became a go-to figure on the subject of why people do bad things to one another, and on the central role of identity in shaping our behavior.

In recent years, though, the psychologist has taken on a different set of projects. One of them concerns, as the title of a 2011 TED talk he gave puts it, “The Demise of Guys.” Zimbardo wants to figure out why (in his view) so many young men are depressed, anxious, and detached from the world, and why they have so much trouble with intimacy. One of the problems, as he put it in the talk, is that “guys prefer male bonding over female mating.” This “peaks at Super Bowl Sunday,” he notes, “when guys would rather be in a bar with strangers watching a totally overdressed Aaron Rodgers of the Green Bay Packers, rather than Jennifer Lopez totally naked in their bedroom.” 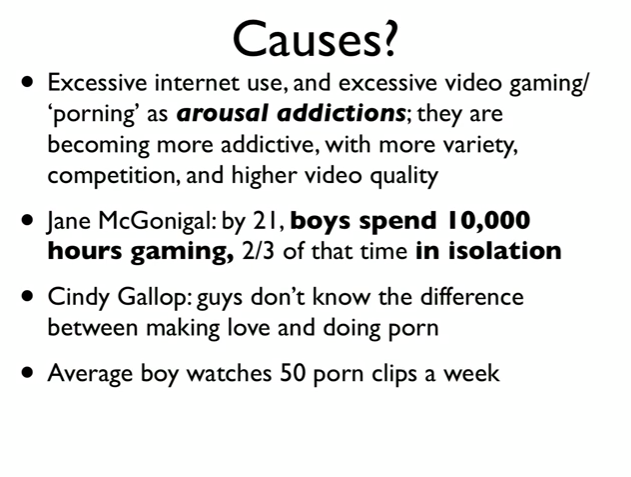 In the years since his talk, Zimbardo has dug deeper and deeper into this idea, and the culmination of his work is a book called Man, Interrupted: Why Young Men Are Struggling & What We Can Do About It, which he co-authored with the writer Nikita Coulombe. It’s out later this month, but earlier this week the duo offered up a teaser in the form of a Psychology Today article with the headline “Is Porn Good for Us or Bad for Us?” If the article offers up an accurate preview of the book’s argument, Zimbardo may, unfortunately, be relying more on cherry-picking and moral panic than on a careful evaluation of the evidence.

The clinical psychologist Dr. David Ley, author of The Myth of Sex Addiction, offered up a quick and effective rebuttal the next day, also for Psychology Today, that’s worth reading if you’d like to dig into some of the specifics of Zimbardo’s arguments about the research and why, in Ley’s view, they don’t hold up. But let’s run down Zimbardo’s strongest claim in a non-wonky fashion as well.

These young men often recount how their social anxiety drastically improved–including an increase in confidence, eye contact, and comfort interacting with women. They also report more energy to get through their daily lives, concentration becoming easier, depression being alleviated, and stronger erections and sexual responsiveness after voluntarily engaging in a “no fap” challenge.

Has Tinder Really Sparked a Dating Apocalypse?
No, Pop Music Isn’t Getting Dumber

Second, and relatedly … well, Ley put this really nicely, so I’ll defer to him: