The dumb-blonde myth is a pervasive one in Hollywood and society, one that stigmatizes fair-haired women — usually pretty ones — for being ditzy and airheaded. It’s the underlying character arc that drives the women in movies like “Gentlemen Prefer Blondes” and “Legally Blonde” to fight against stereotype and prove they’re just as smart as anybody out there. And turns out Lorelei Lee and Elle Woods were onto something: Blondes might be actually be the smartest ones in the room, at least as compared to other women.

Using survey data from baby-boomers, economist Jay Zagorsky of Ohio State University tackled the connection between blonde hair and intelligence, publishing his results in this month’s Economics Bulletin. Zagorsky selected a group of people using the National Longitudinal Survey of Youth (NLSY) for 1979, when participants were between 14 and 21 years old; since then, they’ve been periodically interviewed (as of the research, at least 26 times).

Zagorsky combined NLSY data on hair color and IQ tests in search of a correlation between the two and came upon a surprising conclusion: among Caucasian people — the only group studied since most blonde-haired people are white — those born with blonde hair actually had the highest average IQ scores of all women. Blond-haired men didn’t do too badly themselves, as you can see from the results: 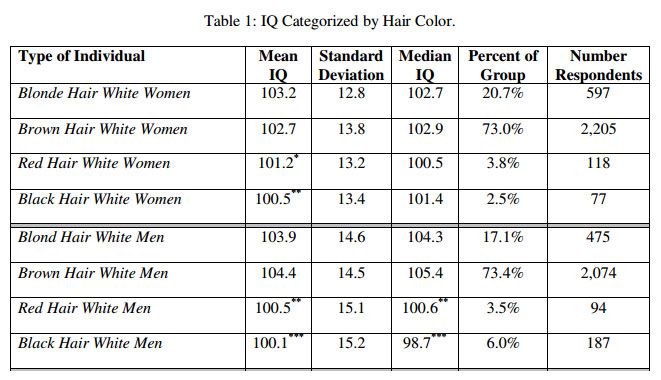 These are, of course, a correlations drawn from a single study. They doesn’t show a definitive causal connection between hair color and intelligence, nor should anyone expect that there is one. So all you brunettes and redheads and raven-haired folk, relax.

Turns Out Blonde Ladies Are the Smartest

¡hola papi! 6:00 a.m.
Hola Papi: ‘Nothing Is Going Right For Me’ “In living a life, there are bound to be many, many mistakes. Maybe mistakes isn’t even the right word for our trials and errors. They are steps.”
By J.P. Brammer
pfw spring 2023 Yesterday at 5:14 p.m.
The Best Street Style at Paris Fashion Week See our favorite looks from outside the shows, from Crocs to head-to-toe Dior.
By Olivia Luppino
student loans Yesterday at 4:25 p.m.
How to Get Your Student Debt Canceled Applications for student-debt cancellation should be available in early October. The sooner you file, the better.
culture Yesterday at 4:20 p.m.
Did Olivia Wilde Just Make Jordan Peterson Cry? Don’t worry, incels — Peterson’s got your back.
action item Yesterday at 3:17 p.m.
How to Help Those Impacted by Hurricane Ian At least 2.6 million people in Florida are currently without power.
obsessive tester Yesterday at 2:51 p.m.
27 Best-Smelling, Bubbliest, Most Soothing Bath Products According to someone who takes two baths a day.
By Jane Larkworthy, Erica Smith, and Kathleen Hou
style Yesterday at 1:55 p.m.
Hey Fashion Friend: How Do I Dress for the Weather Right Now? Try a short-sleeved mock neck before a turtleneck.
By Emilia Petrarca
holiday gifts Yesterday at 1:39 p.m.
31 Gifts for a Bunch of Super-Specific Life Phases From the friend posting their sonogram to the sibling stumbling through their Saturn return.
By Erica Smith and Chinea Rodriguez
oh no no no Yesterday at 1:27 p.m.
Drew Barrymore’s Pizza Salad Is an Abomination People are having very strong reactions to her latest TikTok.
pfw spring 2023 Yesterday at 1:22 p.m.
The Row: An Antidote to Too-Muchness in Paris Plus, Cher headlines the Balmain festival.
By Cathy Horyn
society pages Yesterday at 1:01 p.m.
Beyoncé and Ms. Tina Cheered on Solange at the Ballet Last Night Inside the tenth anniversary of the Fall Fashion Gala.
By Emilia Petrarca
"try everything" -shakira Yesterday at 12:53 p.m.
Bye, Guy Ned Fulmer, one of four Try Guys, is “working” on his marriage after his “consensual workplace” affair went viral.
divorce Yesterday at 12:29 p.m.
Marjorie Taylor Greene’s Husband Files for Divorce He calls his 27-year marriage to the Christian nationalist congresswoman “irretrievably broken.”
dads Yesterday at 12:17 p.m.
Republicans Have a Dad Problem Conservative fathers explain why the fall of Roe is motivating them to vote for Democrats in November.
By Angelina Chapin
how i get it done Yesterday at 11:59 a.m.
How Stylist Zerina Akers Gets It Done During Fashion Week “There’s industry hours and then there’s New York City hours.”
By Joanna Nikas
divorce Yesterday at 11:28 a.m.
MacKenzie Scott Is Divorcing Her Science-Teacher Husband Scott, a billionaire philanthropist and the ex-wife of Jeff Bezos, married Dan Jewett in 2021.
keeping up with the kardashians Yesterday at 10:30 a.m.
Khloé Says She Turned Down Tristan’s Marriage Proposal “I said I’m not comfortable accepting this right now, because I’m not excited to tell my family.”
5 questions with... Yesterday at 9:15 a.m.
Billie Eilish on Her Style Changes and Smelling Like a Christmas-Tree Lot We have the exclusive on her second fragrance, Eilish No. 2, which is woodsy and spicy.
look book Yesterday at 8:00 a.m.
The Look Book Goes to We Met IRL  We talked to singles at the speed-dating series for people of color, whose tickets tend to sell out minutes after they go live.
money talks Yesterday at 8:00 a.m.
3 Women on How Much It Cost to Get Married in 2022 “My sense of money got so warped that it stopped being real to me.”
By Charlotte Cowles
More Stories