In the last few years of their lives, many elderly people experience what researchers call “terminal decline,” a fairly drastic, final drop in their well-being that culminates in death. It’s a depressing subject, but understanding why this takes places in so many people, and what can be done to at least soften this trajectory, is an important area of research.

It’s Better to Die at Home, But Many People Are Scared to Talk About It
Atul Gawande on Making Life Meaningful, All the Way to the End

That’s one of the goals of a new paper in Psychology and Aging (PDF) published by a team led by Denis Gerstorf of Humboldt University in Berlin. “Although individual differences in terminal decline in well-being are well documented and substantial,” the authors write, “the specific factors contributing to such differences are not yet fully understood, particularly outside the physical health domain.” In other words, we don’t know why some people’s final years are rougher than those of others — why, in the words of Gerstorf and his colleagues, “some individuals are able to maintain their well-being until (or very close to) the end of life. One likely possibility, they believe — and I’m simplifying their argument a bit — is that social interaction and so-called “social goals” both have something to do with it.

For one, social goals concerning one’s ability to help other people can facilitate self-esteem, a sense of control, and feelings of competence, for example, through confirming role identities and self-concepts (Glass, Seeman, Herzog, Kahn, & Berkman, 1995; Herzog & House, 1991), and fostering a sense of generativity (Erikson, 1985). In a similar vein, maintaining involvement in social and political activities, despite the challenges that often accompany old age, may convey the self-protective impression of a certain degree of continuity with earlier phases of life (Atchley, 1989).

To try to get a better sense of how social interaction and goals influence quality of end of life, the researchers examined a big 27-year German data set called the SOEP, looking at the records of 2,910 people who are now deceased. They pulled data about well-being, their social resources, and other measures in an attempt to see how social interaction and goals correlated with end-of-life trajectories.

Here’s one way in which they visualize what they found — the vertical axis is “life satisfaction,” while the horizontal one is the years before a given person’s death. 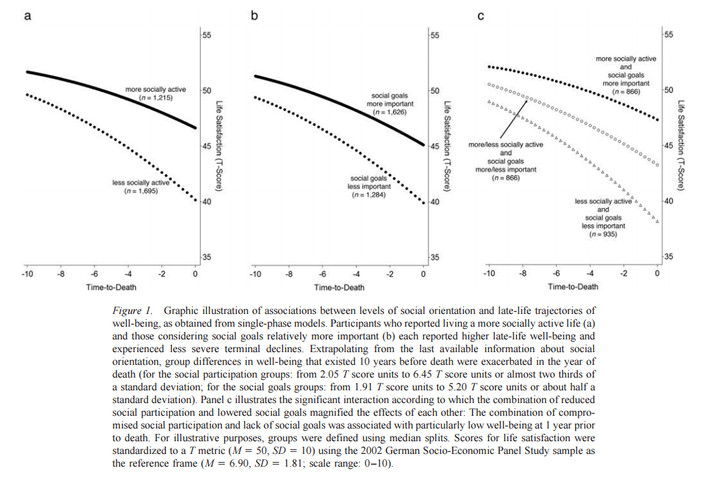 Perhaps unsurprisingly, people high on the social-interaction and social-goal measure end up having a higher level of life satisfaction at the time they die.

As always, there are important questions about what’s causing what, but the researchers came away from their study with some clear recommendations: “[O]ur results suggest that continuing to participate in social activities in the last years is associated with maintaining well-being,” they write. Moreover: “Despite differences in goal contents, goals are highly important in shaping well-being and other mental health outcomes across adulthood because they form the basis for subjective evaluations of whether a person is moving in a desired direction” — meaning it shouldn’t surprise us that the presence or absence of these goals matters a great deal at the end of life.

Why Socializing Is So Important for the Elderly