Taylor Swift had the MySpace selfie down. Photo: Myspace

Is there a woman among us who doesn’t have a MySpace profile out there somewhere?

According to BuzzFeed, even Taylor Swift, she who is aggressively “just like us,” was on MySpace. Screenshots from what appears to be her page circa 2005 are on Tumblr, and they provide a rare glimpse into the psyche of pre-famous normal Taylor (as opposed to post-famous “normal” Taylor). It might not be real, but we can still ask ourselves this crucial question: Would T. Swift make our Top 8? Let’s assess.

In an entry from December 16, 2005, Swift quotes Eric Cartman’s famous line “I do what I want.” While I appreciate her anti-authoritarian streak — which actually is a running theme in several other posts — really? South Park? That’s the best pop-culture reference you can make? She doesn’t appear to quote any other songs, movies, or TV shows in this time period, so this is the only clue to her taste levels. Again: South Park.

While she doesn’t care to reference the work of other artists, she does use her MySpace to flex her own lyricist muscles. In an entry from December 4, 2005, she published some lines that might be early inspiration for a song, or a poem she tortured her friends with at a coffee house. 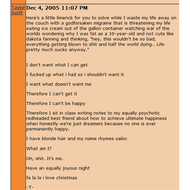 And while she’s a kind, thoughtful friend (several posts reference how attractive her friend Kelsey is, which we all know is a tactic to bait Kelsey’s crush — good wingwomaning), she’s also a demanding one. She’s not okay with people posting unflattering photos of her: “It serves NO purpose other than to make me look FUGYLY,” she writes to a friend, insisting the photo in question come down. Do you get to be so controlling of your image on MySpace? Not if you want to stay in that ol’ VIP Top 8.

But it all boils down to this: Taylor has a lot of inside jokes I would like explained, e.g., “haha fuck sewing machines.” And “I’m Grant Motherfucking Wood.” What happened to the sewing machine? Who is Grant Wood? If I add you, will you tell me these things? 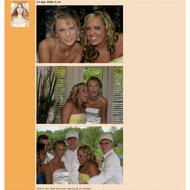 Also, I want to see prom photos when they’re posted. For those reasons alone, T. Swift makes the list, but she’s definitely not higher than No. 7.

Would Taylor Swift Be in Your MySpace Top 8?