Turns out, famous people also have online shopping addictions. We asked nine celebrities that we’d encountered during the past week to tell us the last thing they bought on the internet, and they kindly obliged. Now, you, too, can have Tavi Gevinson’s foam roller, Joel McHale’s jam, or Alessandro Nivola’s Uniqlo underwear. 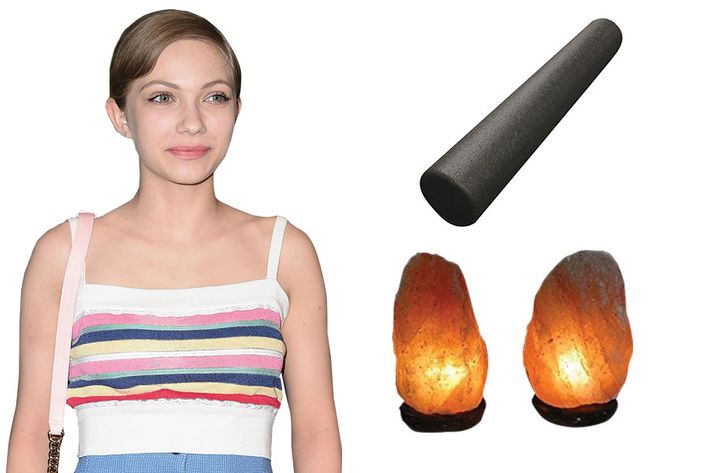 Tavi Gevinson
“Today I bought some really boring things: a foam roller and a Himalayan salt lamp. From Chanel.com. Joking — I got them on Amazon, like a cog. I’m making myself healthy.” 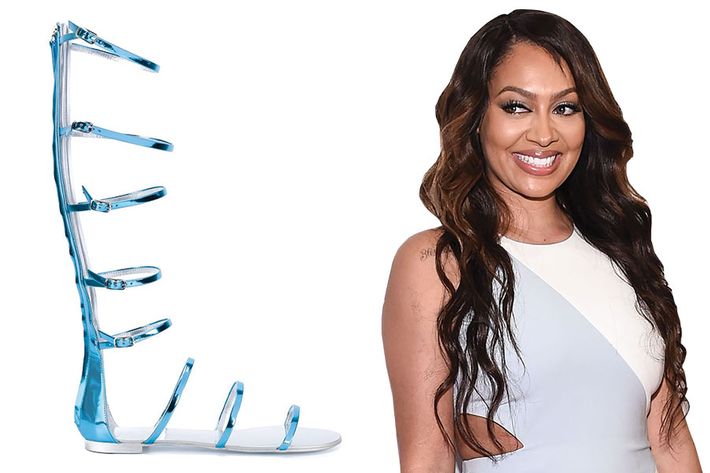 La La Anthony
“Oh my God, I’m online shopping every day. I think I have a bit of an online addiction. We’re going to take a little quick Mother’s Day trip, and I wanted some really nice sandals so I bought some Giuseppe Zanottis from Farfetch — one of my favorites.” 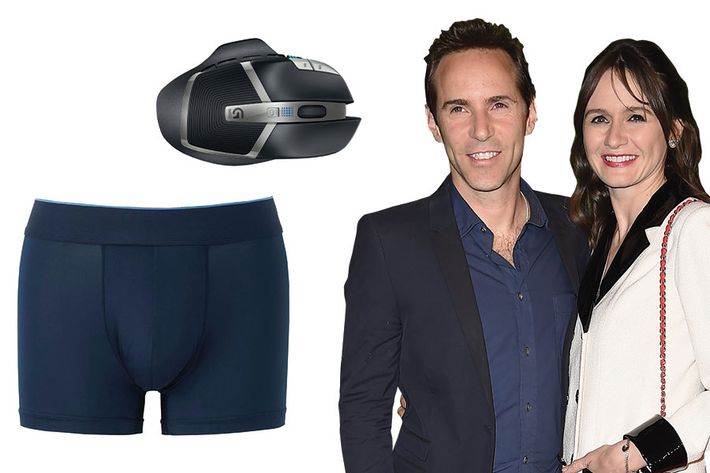 Emily Mortimer and Alessandro Nivola
EM: “The last thing we bought was a computer mouse. Our son keeps buying things online without letting us know, and then it comes up in the Amazon, you know, in your in-box that you’ve bought this incredibly high-tech computer mouse that’s designed to sort of play horrible video games with. That was the last thing that I bought.

AN: “Yeah, the kids occasionally come up to us and hand us $10 bills and say ‘Thanks.’ The last thing I bought online for myself was Uniqlo underwear.” 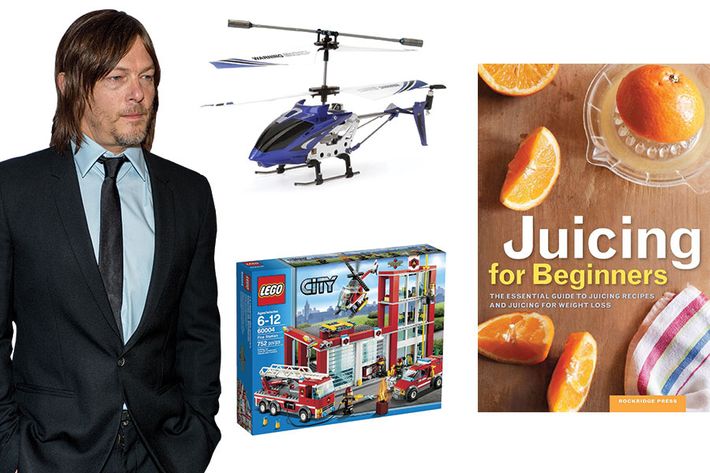 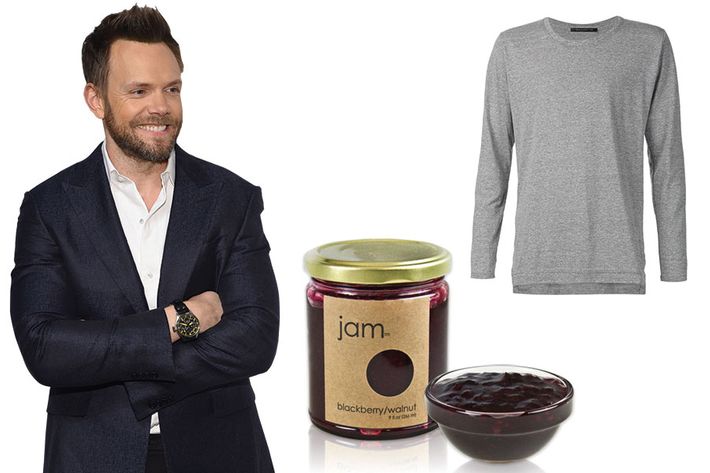 Joel McHale
“I bought stuff from John Elliott, which is a clothing company, a guy who’s designed for Ralph Lauren. And I bought some jelly from this San Francisco jelly company called We Love Jam. They have an amazing blackberry-walnut that I love.” 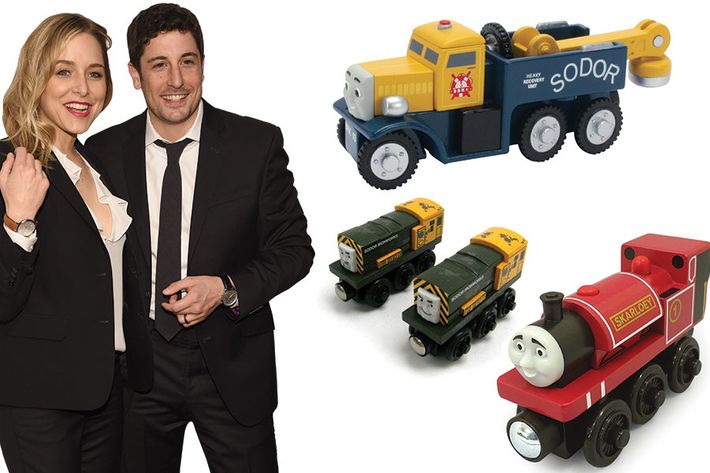 Jason Biggs and Jenny Mollen
JB: “The last thing I bought was Butch the truck, Skarloey the train, and Iron ‘Arry and Iron Bert, the trains.”

JM: “They’re the obscure Thomas trains. Jason’s gotten more obsessed with the trains than our son, so he got the menu of all the Thomases available, and sort of went nuts. 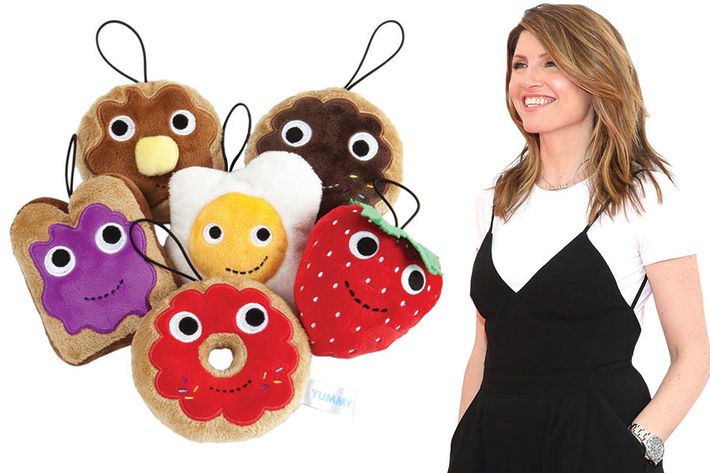 Sharon Horgan
“I bought a toy called a Yummy Breakfast for my daughter.”

9 Celebrities on What They Bought This Week

astrology 27 mins ago
Madame Clairevoyant: Horoscopes for the Week of November 28 Jupiter retrograde is ending, so you can put the rose-colored glasses back on.
By Claire Comstock-Gay
sex diaries 8:00 p.m.
The Divorced Lawyer Who Loves Getting Ready for Dates This week’s sex diary.
snacks Nov. 25, 2022
I Can’t Shut Up About Spam Figgy Pudding It’s so wrong, and yet so right.
gone sale-ing Nov. 25, 2022
25 Black Friday Lifestyle Deals to Make Your Humble Abode a Little Less Humble It’s all in the details.
black friday Nov. 25, 2022
22 Best Black Friday Fashion Deals From Everlane, Nordstrom, Saks, and more.
culture Nov. 25, 2022
Rebranding Midlife Celebrities like Naomi Watts, Stacy London, and Judy Greer are determined to make a business out of menopause.
gone sale-ing Nov. 25, 2022
36 Amazon Gift Ideas That Are Also On Sale For Black Friday Kill two bird with one stone.
5 questions with... Nov. 25, 2022
For Quentin Plair, Stripping Wasn’t Always on the Menu But the Welcome to Chippendales star’s confidence was renewed after playing an exotic dancer on TV.
gone sale-ing Nov. 25, 2022
The 27 Best Black Friday Beauty Deals Tatcha, Sephora, and Nordstrom are already offering some great discounts.
5 questions with... Nov. 25, 2022
How Amanda Gorman Fostered Her Confidence It didn’t always come naturally, but the poet built it with affirmations from her mom and using her imagery as activism.
¡hola papi! Nov. 25, 2022
‘I Lost My Creative Spark’ Don’t think about the book you haven’t written or the drawing you haven’t sketched out. Think about what role you want art to play in your daily life.
By J.P. Brammer
star material Nov. 24, 2022
A Handy Guide to Astrology’s Black Moon Lilith Lots of mystery and intrigue with this one.
5 questions with... Nov. 24, 2022
Pauline Chalamet Shares Her Most Embarrassing College Story Live lobsters were involved.
my two cents Nov. 24, 2022
How to Buy the Best Gifts With Less Money and Time It’s simple: Ask people what they want.
By Charlotte Cowles
celebrity Nov. 23, 2022
Pete Davidson and Emily Ratajkowski Hit a New Relationship Milestone The rumored couple reportedly celebrated Friendsgiving together.
chaos Nov. 23, 2022
Taylor Swift’s Ticketmaster Disaster Is Going to the Senate Congress will hold a hearing on competition in the ticketing industry.
ch-ch-changes Nov. 23, 2022
Alessandro Michele Confirmed Out at Gucci The creative director, who transformed the brand into a more playful, quirky, and gender-fluid version of itself, is exiting after almost eight years.
style Nov. 23, 2022
Is it a Crime to Go to the Met Gala? If you’re a sitting U.S. representative, the answer might be yes.
holiday gifts Nov. 23, 2022
These Nordstrom Black Friday Deals Should Be on Your Gifting Radar At every price point.
tis the season Nov. 23, 2022
Sir Elton John Lights Up Fifth Avenue For Saks’s annual holiday-window unveiling.
More Stories