The brain on the right belongs to a person on LSD. Photo: Imperial College London

In recent years, a handful of scientists have begun seriously investigating the use of psychedelic drugs like LSD as a way of treating mental disorders like anxiety, depression, or PTSD. And yet no study has ever captured what, exactly, it is that LSD is actually doing to the brains of the people who take it. What does a brain on LSD look like?

This week, scientists have a first attempt at an answer. A study published Monday in Proceedings of the National Academy of Sciences, led by neuroscientist Robin Carhart-Harris at Imperial College London, used brain-imaging technology to create images — the first of their kind — of human brains on LSD. The gist of the results is perhaps not so surprising: The regions of the brain associated with vision were more active when the participants were on LSD, a finding the researchers believe may explain some of the hallucinations people typically experience after taking the drug.

The researchers recruited 20 mentally and physically fit volunteers, each of whom had taken LSD or some other kind of psychedelic drug before. When the participants reported to the lab for the study, the researchers injected each person with 75 micrograms of either LSD or a placebo; two weeks later, the participants returned, and again got either drug or placebo, whichever one they hadn’t had before. After that, the experiment consisted of 75 minutes of brain scanning, during which time the study volunteers were instructed to do nothing but rest with their eyes closed.

And this last piece of the instructions — that they were told to close their eyes — makes the fact that their brains showed activity in the areas associated with vision all the more interesting. It’s a biological perspective on what a hallucination looks like, suggesting that the study volunteers were “seeing with their eyes shut … [T]hey were seeing things from their imagination rather than from the outside world,” Carhart-Harris said in a statement. And the greater the “complex, dreamlike visions” the volunteers reported, the greater this effect tended to be. 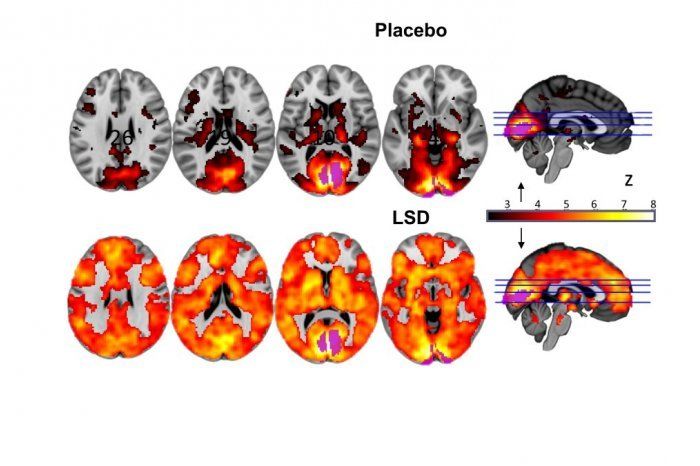 Curiously, while the brain scans recorded increased activity in the primary visual cortex — again, this is the region associated with sight — when the participants were on LSD, there was also increased activity seen across the brain. “We found that under LSD, compared to placebo, disparate regions in the brain communicate with each other when they don’t normally do so,” David Nutt, a co-author on the PNAS study, told Nature. So this may offer further clues regarding the neuroscience of psychedelic drug-induced hallucinations — and it also illuminates the “ego dissolution” that comes along with taking the drug: Your sense of self is altered, in that your consciousness expands beyond yourself. As Nutt explained:

[W]ithin some important brain networks, such as the neuronal networks that normally fire together when the brain is at rest, sometimes called the ‘default mode network’, we saw reduced blood flow … and that neurons that normally fire together lost synchronization. That correlated with our volunteers reporting a disintegration of their sense of self, or ego. This known effect is called ‘ego dissolution’: the sense that you are less a singular entity, and more melded with people and things around you. We showed that this could be experienced independently of the hallucinatory effects — the two don’t necessarily go together.

Additionally, a different study led by one of the authors on the PNAS paper introduced music into the mix. Without music, LSD weakens communication between the parahippocampus (which is associated with memory) and the visual cortex. “But when you hear music as well, the visual cortex receives more information from the parahippocampus, and this is associated with increases in eyes-closed imagery and personal memories,” Nutt explained to Nature. Perhaps no one needed a bunch of scientists to confirm the idea that music enhances the effects of LSD, but here we are.

But the fact that this research is being done at all is itself remarkable; in the U.S., research on humans using LSD has been banned since the 1960s. In the UK, where this study took place, the research isn’t exactly banned, but it’s very hard to get enough money together to pay the exorbitant fees to acquire a “schedule 1” license, which is required to study an illegal drug, as New Scientist reports. These studies got past that thanks to fund-raising from the Beckley Foundation, a charity group that advocates for drug-policy reform and scientific research on psychedelic drugs.

The gist of all of this work, the scientists argue, is that it may help point the way toward more effective therapies using LSD. For now, though, the images that resulted from these initial studies serve as something appropriately trippy to look at, should you need something to look at when you are on LSD.

Trippy Images Show What Brains on LSD Look Like

parties! 1:04 p.m.
Selena Gomez, Emily Ratajkowski, and More of the Bestest Party Pics This Week This week: Marc Jacobs’s fall 2022 presentation, NFT parties, and Pride celebrations.
instagram worthy 1:00 p.m.
Expensive Elopements Are the New Dream Wedding The more elaborate — and exclusive — the better.
By Kate Willsky
fashion 12:36 p.m.
Virgil Abloh’s Vision, on Full Display at the Brooklyn Museum We chatted with “Figures of Speech” curator Antwaun Sargent, who worked on the exhibition with Abloh before the designer’s death.
power 12:35 p.m.
Everything to Know About the WNBA Star in Russian Custody Legal experts say Brittney Griner’s trial is likely to end in conviction.
explosions 12:33 p.m.
Goop Candles Continue Their Campaign of Terror in the Hamptons Two men reportedly caught fire in a Sag Harbor Goop store.
gone sale-ing 12:00 p.m.
Your July 4 Sale Shopping Guide That NuFACE you wanted? It’s on sale.
rsvp yes 11:00 a.m.
Winning the Wedding-Season Marathon How guests with fully booked weekends are getting through it all. (Excel, mostly.)
By Emilia Petrarca
the kardashians 10:30 a.m.
I Can’t Shut Up About ‘Krissing’ A TikTok trifecta: Kris Jenner, catchy audio, and being obnoxious.
By Mia Mercado
allegations 10:23 a.m.
All the Allegations Against Ezra Miller In the past few months, the actor has been arrested twice, repeatedly accused of physical assault, and accused of brainwashing a minor.
life after roe 10:14 a.m.
Are Social-Media Platforms Censoring Information About Abortion? Facebook and Instagram have been restricting and removing posts intended to help people seeking reproductive care.
encounter 8:00 a.m.
Becca Tilley Gets Her Rose Coming out to Bachelor Nation wasn’t easy, but it sure felt good.
By Katie Heaney
the grub street diet 6:00 a.m.
Rachel Antonoff Names Her Pies “I’m like, ‘Do you prefer Bob or Judy?’”
By Rachel Sugar
crime Yesterday at 5:58 p.m.
A Mother Pushing a Stroller Was Shot and Killed in Manhattan Investigators say 20-year-old Azsia Johnson was shot at “very close range” while on the Upper East Side Wednesday night.
5 questions with... Yesterday at 4:43 p.m.
Saucy Santana on the Formula for Going Viral Santana makes viral videos in one take. He does so by staying true to himself.
the body politic Yesterday at 4:00 p.m.
The Abortion Stories We Didn’t Tell How decades of silence left us unprepared for the post-Roe fight.
By Rebecca Traister
pride Yesterday at 2:00 p.m.
‘I’m Trying to Focus on the Joy’ Celebrating 20 years of Pride in St. Petersburg amid Florida’s anti-LGBTQ+ crusade.
By Ashley Dye
that's hot Yesterday at 1:19 p.m.
Paris Hilton Has Her Priorities Straight No president is more important than Britney, bitch.
trendspotting Yesterday at 1:00 p.m.
The Bride Who Didn’t Care Meet the too-cool-for-tradition aesthetic.
By Laura Pitcher
power Yesterday at 12:40 p.m.
Ketanji Brown Jackson Is Officially a Supreme Court Justice She was sworn in on Thursday, becoming the first Black woman to ever serve on the bench.
celebrity Yesterday at 12:40 p.m.
The Investigation Into Meghan Markle Bullying Claims Is Over The findings will not be made public.
More Stories