Last night Beyoncé released yet another surprise album, Lemonade, which premiered first as an hourlong film on HBO and then as an exclusive stream on Tidal. The film featured a star-studded all-black cast including Amandla Stenberg, Zendaya, Serena Williams, and Quvenzhané Wallis, and a lot of dense, rich imagery and fashion to unpack. Beyoncé’s longtime stylist, Marni Senofonte, styled the 12-track film, from hoodies over a dress to the dramatic canary yellow Roberto Cavalli number, and so much more. Click through the slideshow to see some our favorite looks from the feature. 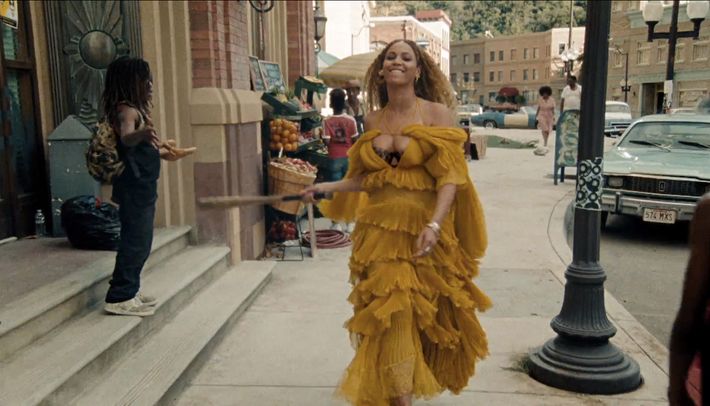 Seeing Beyoncé roam through the streets as a jealous lover, smashing cars and fire hydrants complete with a ‘hot sauce’ baseball bat is incredible all by itself. Somehow Queen Bey makes this feel cheerful in layers of this canary yellow chiffon dress from Peter Dundas’ F/W16 collection at Roberto Cavalli. 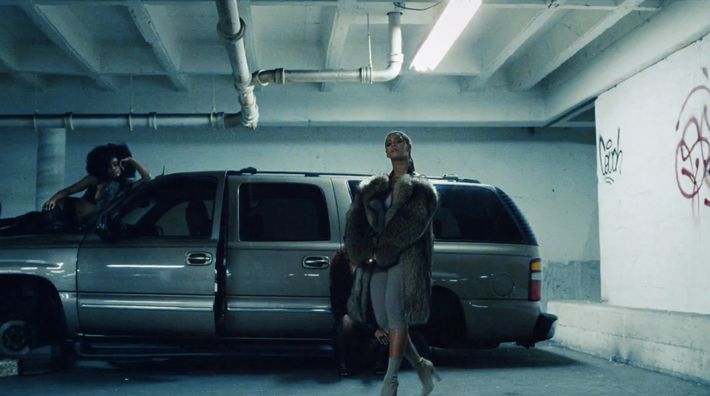 Whenever ghetto-fabulous Beyoncé makes an appearance, it’s a good thing: These looks show a side of her that’s more approachable both personally and sartorially. From the blinged-out chain to the knee-length Hood by Air fur coat paired with a Yeezy crop top and leggings, this look is too good. 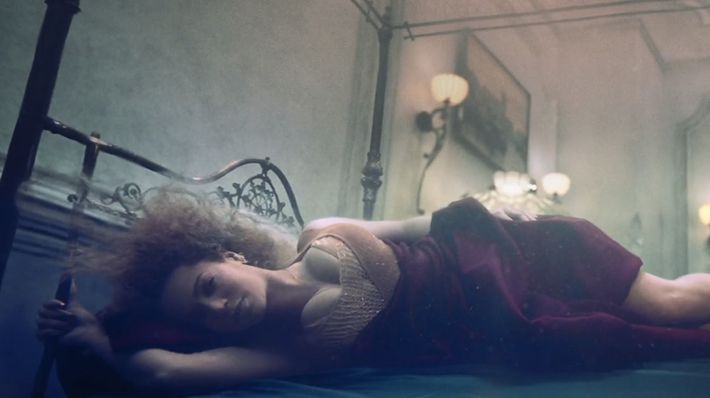 There’s still no credits for this look out yet, but I couldn’t stop staring at all the Victorian inspired outfits–this one in particular because she is underwater, in a crystal encrusted bustier and a gown, casually holding her breath. 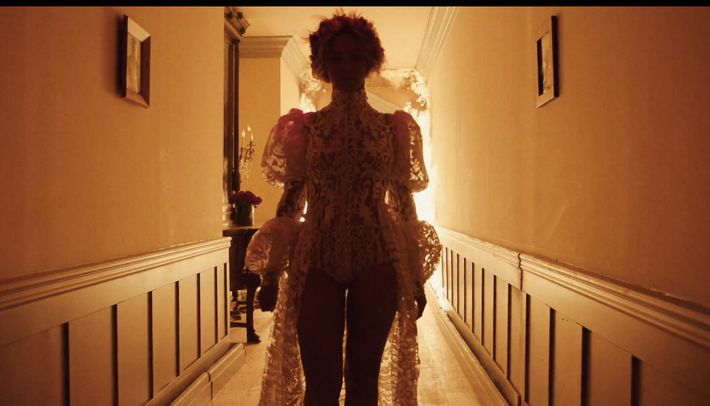 Another Victorian lace gown that fits the old Southern aesthetic of New Orleans. Though it doesn’t get much air time in the video, the sleeves and silhouette in front of a blazing door leave us wanting more.

If having Serena Williams as your video girl wasn’t enough, Beyoncé laid back in a hand-beaded Swarovski crystal bodysuit by Kuwait-based designer Yousef Al Jasmi. The sheer detailing of the balloon sleeves and neckline demanded attention even with Serena twerking. 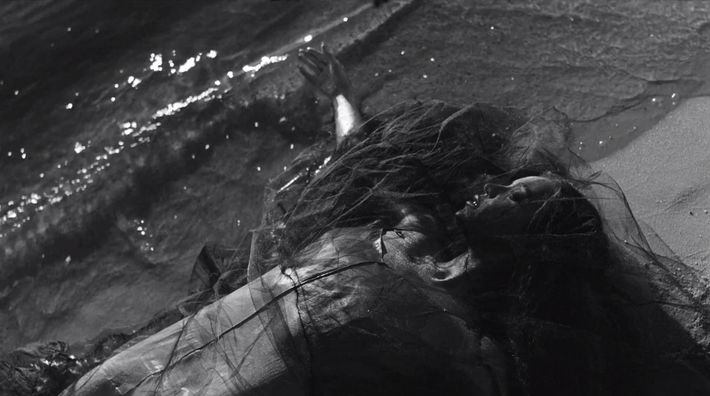 This was just an incredible shot. It’s hard to say what she’s wearing besides this tulle overlay. None of this matters because Beyoncé looks like a magical mermaid. 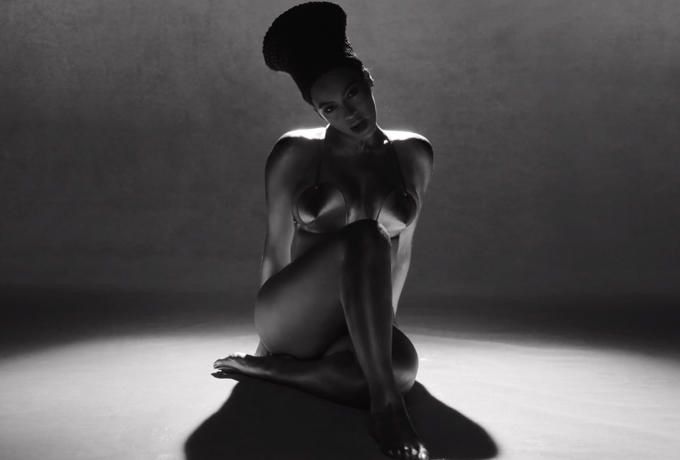 From the visuals for Sorry, in this scene Beyoncé dances sitting down in a marvelous, Nefertiti-esque braided crown and a metallic Zana Bayne leather cone bra. 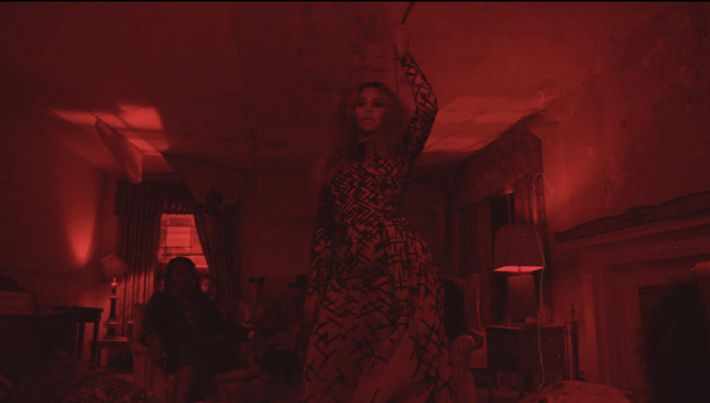 Another dramatic gown, only this time a completely different feel. This Nicolas Jebran gown has Swarovski embellishment throughout with a high neck, and looks even cooler in the red lighting since the dress is actually a bright orange. 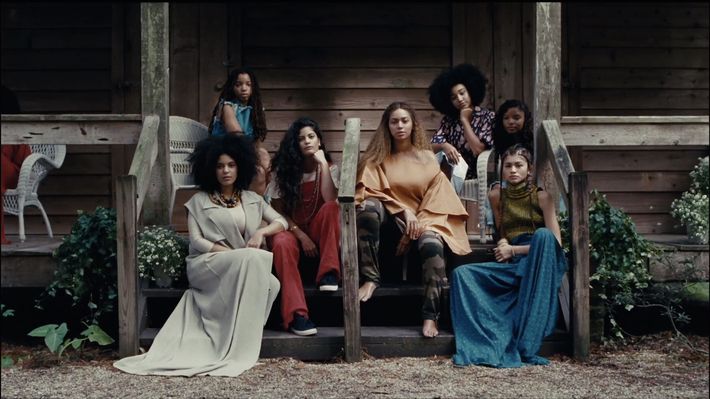 Last but not least, the scene that could be called ‘Black Girls Rock,’ with Zendaya, Amandla Stenberg and more. This was the most casual but of course styled with a striking ‘Bidi Bidi Bom Bom’ off-the-shoulder Rosie Assoulin top that boasts cascading ruffles as sleeves and paired camouflage pants.

culture 7 mins ago
There Really Is a Coordinated Online Attack on Meghan Markle A new analysis found that the Duke and Duchess of Sussex were the targets of a strategic, monetized social media campaign against them.
euphoria 6:31 p.m.
8 Pieces You Can Shop From Episode 2 of Euphoria By Kim Shui, Réalisation Par, Nodaleto, and more.
fashion 6:24 p.m.
All Signs Point to a Big Year Ahead for Aimé Leon Dore The cult menswear brand has a New Balance collection in the works and LVMH money in its pocket.
engagements 6:13 p.m.
What Is Machine Gun Kelly Hiding? The story of his proposal to Megan Fox isn’t adding up.
the grammys 4:56 p.m.
The Grammys Are Back On The awards show has been pushed to April — and will now take place in Las Vegas.
health 4:45 p.m.
Everything to Know About Rapid At-Home COVID-19 Tests Americans are finally eligible to receive free rapid tests.
power 2:09 p.m.
The New York Post Gets Its Own Tabloid Scandal A former top editor sues, saying the paper’s notorious former boss was welcomed back after sexually harassing her.
By Shawn McCreesh and Angelina Chapin
movies 2:00 p.m.
Daniel Radcliffe, We Are Ready for Your Music Career The actor will be portraying Weird Al in an upcoming biopic.
the bigger picture 1:34 p.m.
Wrestling Has a Dark Side. But for Some, It’s a Safe Space. Photographer Sofie Vasquez spent a year traveling the country, documenting the indie-wrestling scene.
By Bindu Bansinath
keeping up with the royals 1:29 p.m.
Uh, Prince Andrew Has a Teddy Bear Collection? A new documentary claims he yelled at staff who didn’t arrange his stuffed animals to his liking.
dinosaur bones 12:48 p.m.
This Is a Truly Surreal Zoom Background Dwayne “the Rock” Johnson made a recent TV appearance sitting in front of an enormous dinosaur skull named Stan.
celebrity 10:52 a.m.
Tracing the Ongoing Feud Between Britney and Jamie Lynn Spears Things spiraled out after Jamie Lynn went on Good Morning America to promote her new book.
recommendations Yesterday at 3:00 p.m.
We Should All Be Wearing House Shoes A foolproof way to avoid bringing a dustpan’s worth of dirt into your bed.
k-i-s-s-i-n-g Yesterday at 10:00 a.m.
Lexi and Fez, Sitting in a Tree Could this be Euphoria’s most unexpected romance?
buzz buzz buzz Yesterday at 9:00 a.m.
All Our Burning Questions From the Yellowjackets Finale Some of the biggest mysteries remain unraveled.
how i get it done Yesterday at 7:00 a.m.
How Milk Bar’s Christina Tosi Gets It Done “More colorful, more magical, and more rule-breaking.”
By Kristen Bateman
astrology Jan. 16, 2022
Madame Clairevoyant: Horoscopes for the Week of January 17 Aquarius season begins this week, and there’s a full moon in sensitive Cancer.
By Claire Comstock-Gay
sex diaries Jan. 16, 2022
The Mom Trying to Meet Her Online Boyfriend IRL This week’s sex diary.
kimye Jan. 16, 2022
The Ups and Downs of Ye’s Dramatic Weekend From a tell-all interview to the saga of Chicago’s fourth birthday party.
news Jan. 16, 2022
Everything We Know About The Texas Synagogue Hostage Situation The suspect has been killed, but a motive remains unclear.
More Stories