The Story
“A lot of horrible things have happened to me,” Viva is saying, from her home in Palm Springs, “but I would consider that the worst.” We are talking about a profile that ran in just the fourth issue of New York 48 years ago. The writer, Barbara Goldsmith, visited Viva — a.k.a. Susan Hoffmann, a member of Andy Warhol’s circle and the star of several of his films — at her home on East 83rd Street, and at Warhol’s Factory on Union Square. The story Goldsmith filed contained passages like this: “Viva stretched, rubbed her eyes, and yawned. ‘I’m tired out from that Tucson location trip … The first two nights I slept with John Chamberlain who is an old lover of mine. I slept with him for security reasons. Well, then, it was a different one every night. One night Allen Midgett and what’s his name, Tom Hompertz, both made it with me. Andy looked in the window and said “What are you doing in there? I told you not to. You’re supposed to save it for the camera.” Then there was Little Joe [D’Allessandro] who was sweet and Eric [Emerson] who was just so rough.’ Viva looked up and said, ‘Don’t look so skeptical. It’s the truth, I always tell the truth.’ ”

“She had me having sex with every single cast member — who were all gay anyway!” Viva adds heatedly. “We were only there for two nights!” (Goldsmith wasn’t available for comment but has always stood by the piece.) And then there were the photos, by Diane Arbus. One is a full-length nude of Viva, laughing. In the other (above), she looks stoned out of her mind, an impression doubled by the text (“I’ve tried everything except heroin and opium”). Viva has since said she wasn’t really much of a drug user and that she was sober during the session. 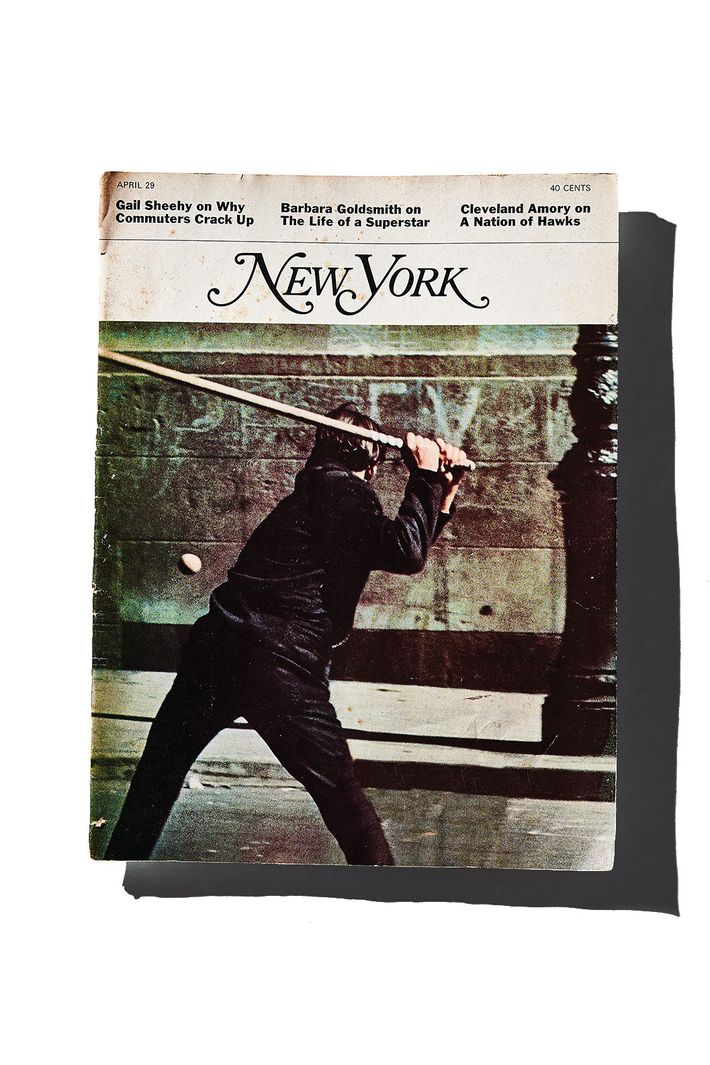 That photograph just went on view at the Whitney, which has acquired the very print that Arbus sent to the magazine. (The museum also just had a public spat with Viva over a screening of Warhol’s Blue Movie, in which she stars.) How on earth did Arbus make such a picture? “Despite my degree from Marymount College and my one year at the Sorbonne and all the art schools in Paris,” Viva says, “I didn’t have any brains.” She had also, she notes, been an artist’s model and was blasé about nudity. “I had slept on the couch the night before, on a white sheet,” she says, and had forgotten about the shoot until Arbus showed up during breakfast. “I went to the door wrapped in the sheet — I was on the phone with Richard Avedon, and he said, ‘You’d better let her in!’ So I let her in, and she said, No, no, don’t get dressed, I’m just shooting your head, and I was so stupid I believed her. So I sat there and laughed and talked with no clothes on!” According to Arthur Lubow’s forthcoming book Diane Arbus: Portrait of a Photographer, that was in character: Arbus had made and broken such promises before. Viva has also said that Arbus directed her to roll her eyes, although Lubow says Arbus usually avoided giving such direct instruction.

He also reports that Clay Felker, the founding editor of New York, “almost fainted” when he saw the photographs. He went to his star writer, Tom Wolfe, for counsel, saying, “Take a look at this. The advertising department says if we run it, we’ll lose every advertiser we have on Madison Avenue.” Wolfe recalled later that “I was standing up when I started reading — and found I was unwilling to interrupt myself long enough to sit down.” He told Felker, “I don’t see how you can not run it.”

The Reaction
Advertisers did indeed bolt, and the magazine’s board almost fired Felker the next week. He later figured that it had cost New York half of its first year’s ad revenue. But he also established that his baby magazine was no clone of The New Yorker.

Viva was appalled. “I was getting dressed to go on The Merv Griffin Show — my first time on TV! — and this kid walked in and dumped this thing on me as I was putting on my ten separate clumps of eyelashes. And I said, I’m sorry, I have to cancel, and [the booker] asked why. And I said, because this horrible pack of lies has just appeared in New York, and my parents are going to see it — oh my God, I’m ruined. He said, no, no, go on the show, and we’ll talk about it.” On the air, she said she planned to sue, and, by chance, that very night, “I go into Max’s, and there’s Diane. And she begged me, please, please, don’t sue. And Andy and Paul [Morrissey] convinced me not to.” In fact, the story left marks on everyone, not just Viva. Lubow says that Arbus had trouble getting magazine work after it ran. Even Felker had regrets: “I made a terrible mistake publishing [the photos],” he told the Times in 1984. “They were too strong.”

*This article appears in the April 18, 2016 issue of New York Magazine.

power 7:24 p.m.
Marilyn Manson Accused of Sexually Assaulting a 16-Year-Old Girl In a statement from his attorney, Manson denied allegations he sexually assaulted a minor in 1995.
tyre nichols 5:05 p.m.
A Sixth Officer Has Been Suspended After Tyre Nichols’s Death: Updates The officer was relieved of duty the same day the five officers charged with murder were fired for the beating.
hairy situations 3:46 p.m.
Wait, So Now Even My Hair Is Aging? Ugh.
By Parizaad Khan Sethi and Shanna Shipin
documentaries 1:31 p.m.
‘For So Long, I Had Larry in My Ear’ In an exclusive clip from Hulu’s Stolen Youth docuseries, Larry Ray survivor Felicia Rosario opens up about the impact of his gaslighting.
keeping up with the royals 12:37 p.m.
Could the Spice Girls Get Harry to the Coronation? Sources are saying the palace is “super keen” to get “Britain’s biggest girl band” involved.
sparking joy 11:00 a.m.
Marie Kondo Has ‘Kind of Given Up’ on Being Neat Validation for messy homes everywhere.
transgender rights 10:59 a.m.
Utah Bans Gender-Affirming Care for Trans Youth Already this year, Republican lawmakers have proposed more than 150 bills limiting the rights of trans people.
spring fashion 8:00 a.m.
The Promise of Pyer Moss Kerby Jean-Raymond was one of fashion’s most celebrated young designers. Then what happened?
By Tahirah Hairston
spring fashion 8:00 a.m.
It’s Glo Time Grammy nominee GloRilla is figuring out how to be famous while staying F-R-E-E.
By Tirhakah Love
spring fashion 8:00 a.m.
The Hustle of Women in Hip-Hop Editor-in-chief Lindsay Peoples on launching the celebration of 50 years of women in hip-hop who’ve changed the game.
By Lindsay Peoples
how i get it done 7:00 a.m.
How Political Commentator Molly Jong-Fast Gets It Done “We’re a pretty sedentary bunch, but we do a lot of dog-walking. Also, I try to visit my mom once or twice a week depending on how guilty I feel.”
sex diaries Yesterday at 8:00 p.m.
The Creative Director Getting a Little Tired of Feeld This week’s sex diary.
snl Yesterday at 3:48 p.m.
Michael B. Jordan Is a Different Kind of Jake From State Farm See him rock the red polo and khakis on SNL.
celebrity couples Yesterday at 12:28 p.m.
This Good Morning America Romance Keeps Getting Messier Amy Robach and T.J. Holmes are out at ABC.
astrology Yesterday at 8:30 a.m.
Madame Clairevoyant: Horoscopes for the Week of January 30 The overarching astrological story right now is one of growth, action, and following through on intentions.
By Claire Comstock-Gay
spring fashion Jan. 27, 2023
12 Ways of Looking at André Leon Talley The friendships and love stories found inside his estate auction, as told by Anna Wintour, Marc Jacobs, and Tom Ford, and more.
By Cathy Horyn
wait what is happening on tiktok? Jan. 27, 2023
Everything We Know About TikTok’s Lashgate Drama Did Mikayla Nogueira add false lashes or not?
parties! Jan. 27, 2023
Teyana Taylor, Anna Camp, and More of the Bestest Party Pics This Week Parties with Gucci, Sundance, and more.
gone sale-ing Jan. 27, 2023
10 Things You Don’t Have to Pay Full Price for This Week Deals from Dyson, Nordstrom, Shopbop, and more.
friday sales Jan. 27, 2023
19 Things on Sale You’ll Actually Want to Buy: From Lunya to Areaware Including fuzzy Birkenstock clogs, a teensy Cricut heat press, and our favorite weekender bag from Patagonia.
More Stories