Last fall, I visited Amsterdam for the first time. As anyone who’s visited the capital of the Netherlands can tell you, it’s (maddeningly) always raining, or about to rain there. And sure enough, on my first day there, it was pouring. I was ready to spend the afternoon happily eating Gouda in bed, but my guide Joe insisted we go out, and handed me an umbrella as he led the way with cheery Dutch efficiency.

When I got outside, and I opened the umbrella, I didn’t quite know what to do. Instead of the expected dome shape, this one was weirdly angled, with one shorter side and one longer one connected at a 135-degree angle — it looked like an upside-down check mark.

“Wait, how am I supposed to use this?” I asked Joe. “Oh, you haven’t seen one of these before?” he asked, without waiting for my reply. “The shorter end is the front, and the longer part is the tail. You basically keep your head underneath the part where the canopy angles.” As we circled our way from Anne Frank’s house to Dam Square to the Rijksmuseum, I gave perfunctory nods; what I really wanted to know about was the umbrella. “Why does it look like this? Why am I not getting wet? Do I get to keep it?” The Senz, Joe explained, was created by a Dutch industrial designer who wanted to make an umbrella that was storm- and windproof. Unlike that of ordinary umbrellas, the shape is virtually impossible to blow inside out. “They’ve gotten really popular with the Dutch,” he said, and, indeed, I noticed that nearly two-thirds of the umbrellas people carried on the street were shaped like mine.

When I got home and found the company’s website, I discovered the Dutch designer was named Gerwin Hoogendoorn and that the umbrella works so well because it mimics the aerodynamic shape of a stealth bomber. Someone smarter than I am can explain it, but I do know that it’s never turned inside out like my Duane Reade Apt. 5 umbrella has, or that Core Club umbrella I inherited from a boss that came apart on my way to a work party, or that far-too-expensive Brooks Brothers one that was impossible to close. Because of the Senz’s funky canopy, there’s less fabric to wrap up, too, so the umbrella travels surprisingly well.

Buy the Senz at Bergdorf Goodman or Amazon.

Plus, other New Yorkers’ favorite umbrellas: 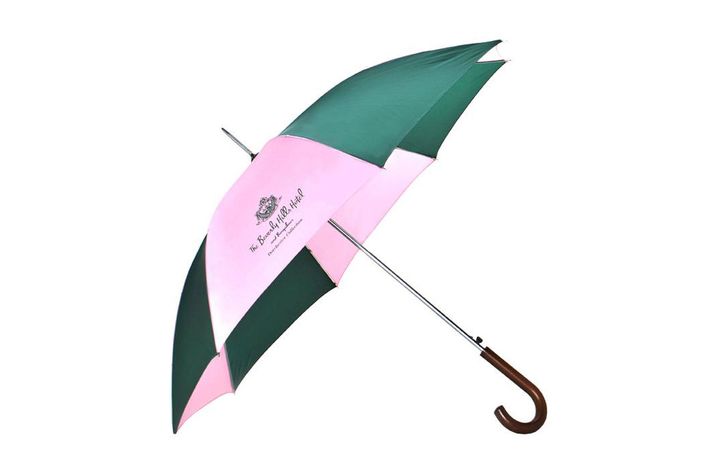 The Hotel Umbrella
Signature Beverly Hills Hotel Umbrella, $52
“I am obsessed with and absolutely love hotel umbrellas. The one that’s highest on my wish list is the one from Claridge’s Hotel, in London. I don’t think you can buy it, or it’s something like a thousand dollars, so you’ll just have to stay there and try to steal one. More attainable is the Beverly Hills Hotel umbrella, just because it’s so attractive with that gorgeous alternating pink and green. It’s also incredibly sturdy in your hand and feels really secure.” — Lisa Fine, Textile Designer 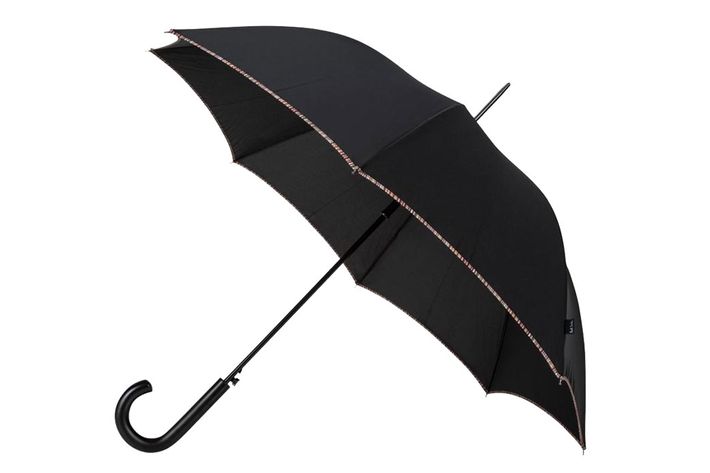 The Man-Brella
Paul Smith Black Signature Stripe Trim Umbrella, $125
“You know, it’s just the classic gentlemen’s umbrella from a classic gentlemen’s brand. It’s so handsome in the full black with just the little bit of trim along the edge, which actually looks even more amazing when you close the umbrella and the trim does this spiral onto itself. There’s something very sleek and debonair about it — you look put together and well-suited holding something like this, but not in a stuffy way.” — Patrick Mele, Designer 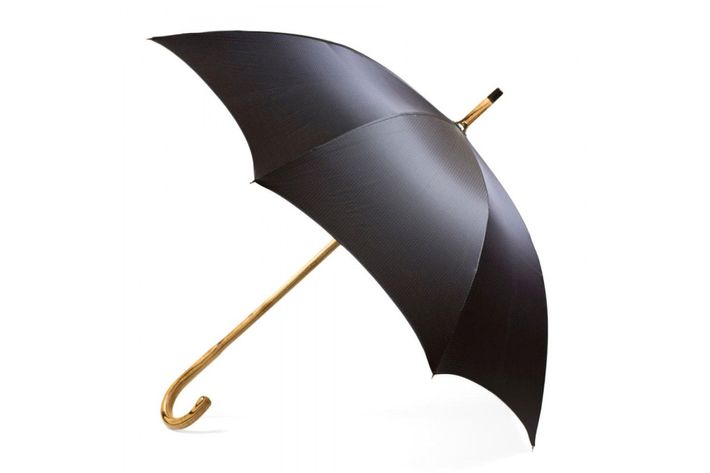 The Money-Is-No-Object Umbrella
Talarico Blonde Hickory Solid Stick Umbrella, $335
“I like Talarico solid stick umbrellas because they’re basically walking sticks with an umbrella frame built onto them. I love how seamlessly they’re built. They have the handle and shaft as one piece, which is why it’s called a solid stick. It’s really just a delight to handle, and the canopy locks in with a satisfying thunk too. Personally, I like hickory for the wood the most because it just feels the most luxurious.” — Mark Cho, Owner of The Armoury

The Best Umbrella Is a Lopsided Dutch Umbrella