Science of Us has frequently noted that it’s frightfully easy to find pseudoscientific, potentially harmful health information online (some of it disseminated by celebrities who should know better). For anyone worried about this trend, NPR has a pretty disturbing story out of China.

Anthony Kuhn reports that the Chinese government is investigating Baidu, roughly the Chinese equivalent of Google — Google itself is blocked in China — after a college student there died of cancer, on April 12, after seeking out treatment information online:

The scandal began with a college student from northwest China’s Shaanxi Province. Two years ago, then-sophomore Wei Zexi found out he had a rare form of cancer called synovial sarcoma. After other treatments failed, he turned to Baidu.

His search on Baidu suggested a treatment at the Beijing People’s Armed Police Corps Hospital No. 2. It claimed to have a highly effective experimental treatment developed in collaboration with Stanford Medical School.

In fact, state media later reported, there was no collaboration. The treatment failed, and Wei accused Baidu of cheating him.

The search result that led Wei to the “collaboration” in question, Kuhn notes, was actually a sponsored link — a pretty misleading one, it sounds like, given the mention of Stanford. While it was labeled as sponsored, “many Chinese are furious at Baidu and at the government for what they consider lax regulation” of these sorts of search results.

One can’t prove that Wei would have recovered if he hadn’t fallen for what sounds like a sham treatment, of course, but this is a disturbing case study in how harmful misleading online health information can be — especially when the person seeking out that information is in a desperate or scary situation.

For (morbid) curiosity’s sake, I Googled “synovial sarcoma treatment” to see what sponsored results Google would offer up: 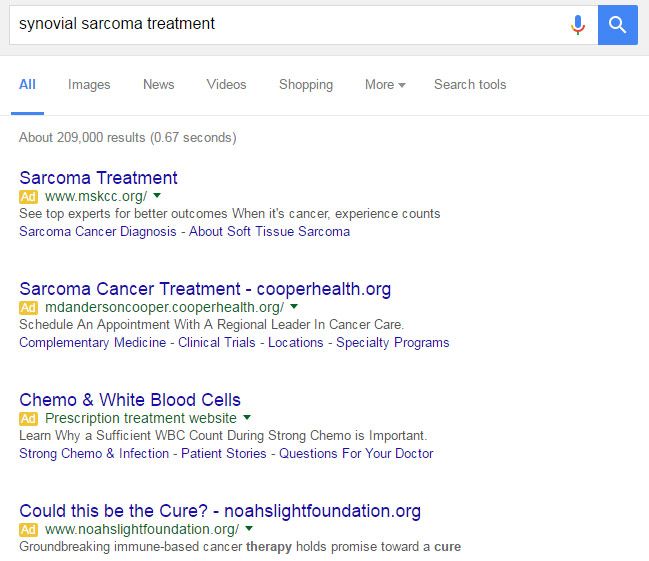 To be honest, these results aren’t that bad: two cancer hospitals, a legit-seeming foundation, and, less ideally, a prescription drug website (many health researchers complain about direct-to-consumer drug advertising, since consumers are less qualified than physicians to evaluate different medications’ sometimes overblown claims). Nothing comes across as immediately scammy. Which doesn’t mean, of course, that other Google searches won’t turn up some sponsored quackery.

But back to Baidu: It’s an absolute behemoth in China. So to the extent the government there actually follows through with the spotlight it’s shining on sponsored results in the wake of Wei’s death, it could have an important, potentially lifesaving impact.

Did an Internet Search Lead to a Cancer Death?