Here is the thing about shopping for a cat: Cats are really picky. With that in mind, we polled New York’s cat-owning staff members and asked them to suggest the things their finicky felines actually like (a Jackson Pollock–y stuffed fish, a piece of wire with some cardboard attached at the end), plus some lavender-scented kitty litter that their owners are equally obsessed with. 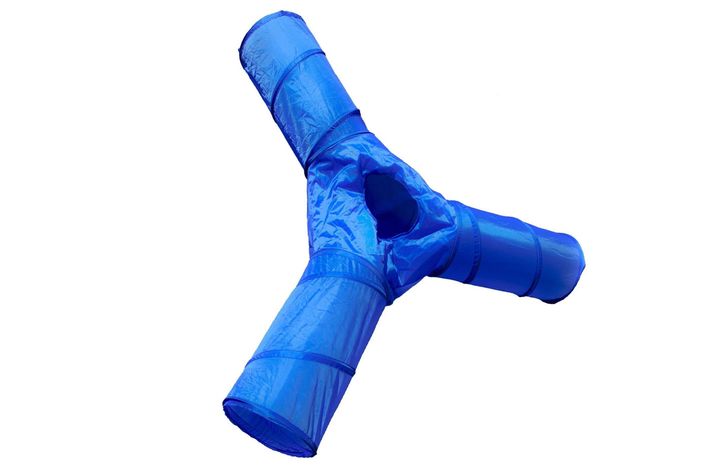 Three-Way Cat Tunnel
This was a Christmas present from my sister’s cats, who have one too, to mine. Turns out our cat loves this crazy thing. She’ll do a pounce circuit, attack one tunnel, get out, walk around, pounce into another tunnel. She uses it as a hidey-hole from which to attack our feet. She’ll nap in it. The best part is it can collapse into a compact bundle, so we can hide it away when we have guests.
Buy it: $20 on Amazon 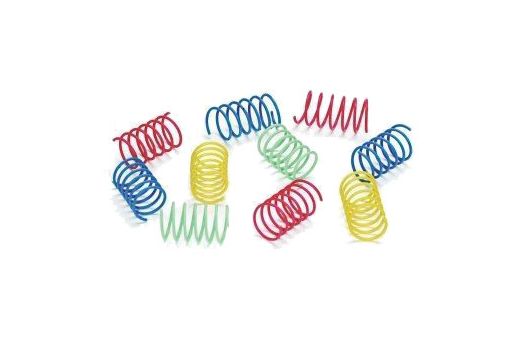 Ethical Products Springs
My cat, like most cats, is not hugely interested in the things I want her to be interested in: her food, her toys, not throwing up on the floor, etc. We’ve probably spent nearly $100 over the last three years on tasteful, catnip-filled, feathered, animal-friendly, organic, wicker toys, most of which she ignores. But these springs — cheap, hideous, probably dangerous in some unpredictable way — she loves these springs. She spends hours hunting them around the house; sometimes I’ll wake up early in the morning and hear the sound of one scattering across the wood floor as she gallops behind it. I wish she liked something that didn’t, when left lying around, make my house look like an abandoned toy factory. But you don’t have a cat because you want your apartment to be tasteful. You have a cat because you’re a masochist.
Buy it: $6 for a 10-pack at Amazon 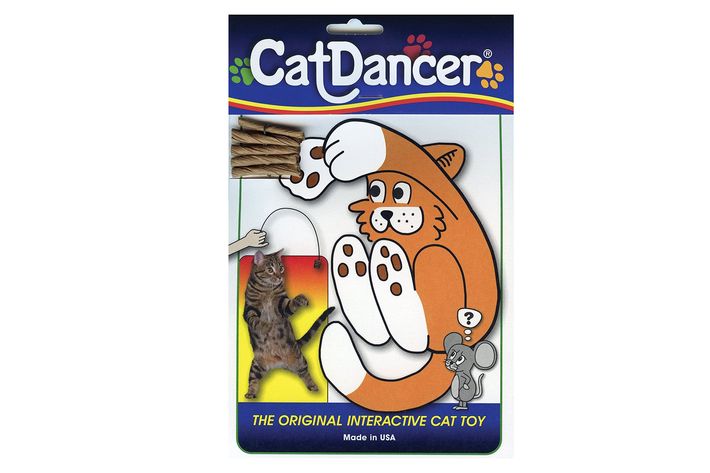 The Cat Dancer
At $6.99, the Cat Dancer seems both insanely cheap and overpriced. After all, it’s just a piece of wire with some cardboard on the end. But there are few things cats love more than cardboard, and something about the spring-y nature of the curved wire makes the cardboard buzz through the air in a way that’s wildly enticing to my orange tabby. He’s rejected plenty of high-concept cat toys in his life, but he’ll always come back to this one.
Buy it: $7 for a 2-pack at Amazon 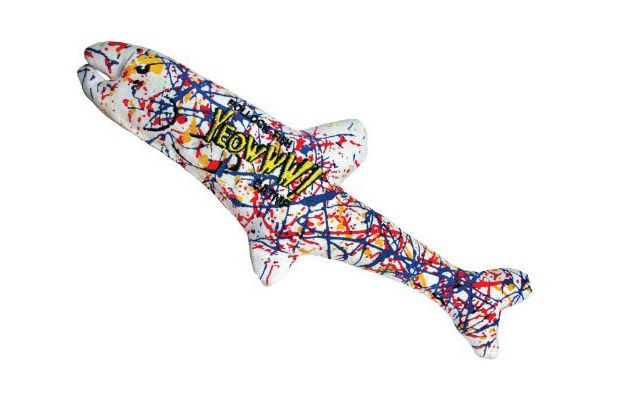 Yeowww! Pollock Fish Catnip Toy
My partner and I have two cats, Sister Dolorita (Doley) and Bubbles (Bubs), and every year we buy them Christmas presents. One year, one of us stumbled on an adorable splatter paint (i.e. Jackson Pollock style) fish filled with organic catnip. It’s most likely their favorite toy, and I’m judging that solely on the amount of drool they’ve applied to it. We’re actually on our second fish already (the first one got a little gross). We’ve gotten them millions of catnip-filled toys, but for some reason this one really kicks it up a notch. They’re obsessed.
Buy it: $11 at Amazon 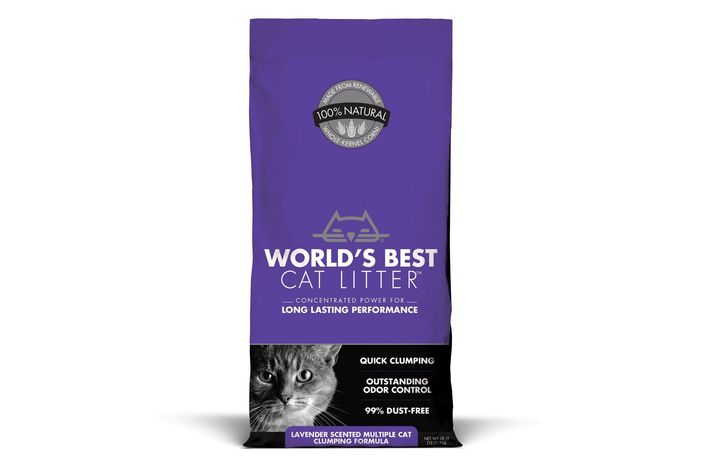 World’s Best Cat Litter
There is nothing I love more than cats, but there is nothing I hate more than cat smell, so I wouldn’t able to live in a studio apartment with two cats if World’s Best Cat Litter didn’t exist. Use it once (I prefer the lavender scent) and its clumping and scent-masking powers will make you wonder why you even pretended to be satisfied with Fresh Step. It’s reasonably priced, and one 28-pound bag lasts for weeks. The World’s Best’s name does not overpromise.
Buy it: $23 for a 28-pound bag at Amazon 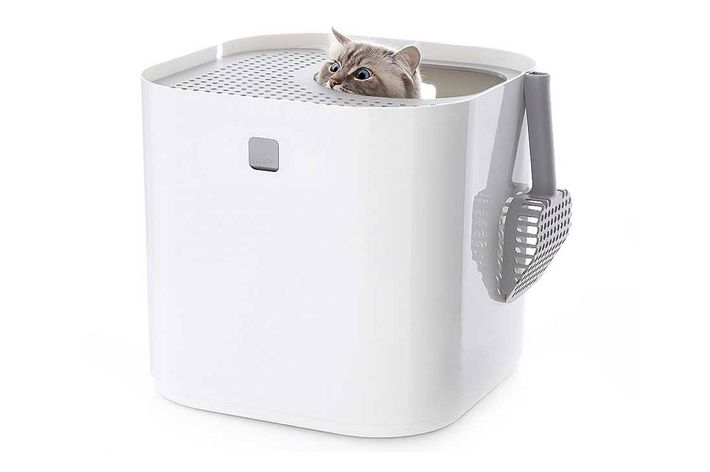 Modkat Litter Box
I adopted my two cats from a swindler who lied to me about one of them being spayed and didn’t inform me that they both had an infection that gave them explosive diarrhea (an infection that eventually went away, but still). That said, he gave me a great deal on a Modkat litter box, and I’m glad he did. This sleek feline accessory keeps litter pellets from escaping onto your floor, comes with a detachable scoop-brush, and doubles as a tiny platform for your kitty to chill out on top of. And I can say from experience that it’s surprisingly easy to scrub diarrhea off its walls!
Buy it: From $130 at Amazon 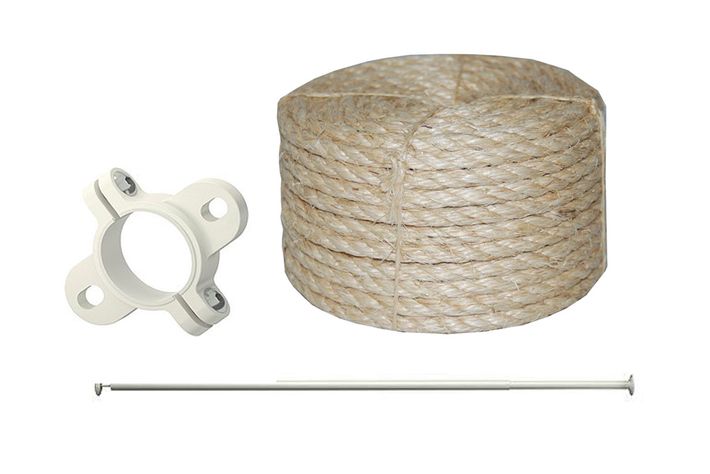 A Cat Climbing Tree Ikea Hack
The idea for this Ikea hack came to me after my kittens ripped the insulation covering a hot-water pipe in my bathroom to shreds. I realized I could make my own “cat tree” that wouldn’t potentially damage my plumbing. So I took some leftover floor-to-ceiling tension rod from Ikea’s Stolmen wardrobe system, and then ordered some sisal rope from Amazon to wrap around it. The kittens run up the tree at full speed in about three leaps and have a spot up high, which they love, all to themselves. Be sure to have the tension of the rod set as tightly as possible and that the rope is tied extra securely. You can also add the Ikea mounting fixtures at the bottom and a few midway, which helps keep the rope from slipping.
Buy it: Ikea Stolmen tension rod, $30 at Ikea; Sisal rope, $13 at Amazon