The truth is out there. Photo: Leo Vals/Getty Images

History dictates that there are certain accepted tools a woman must familiarize herself with in order to be admitted into the “system”: lipstick, blush (rouge?), eye creams (?), dry shampoo, clean shoes. I accept the large financial toll these items take on my wallet because I seem to have no other option. But in the effort to hold onto at least some of my dignity, I’ll share with you some thoughts I have about mascara. I’ve quietly believed for many years that mascara is bullshit, and I refuse to accept that I am alone in this thinking.

I was surprised to find, when searching for the term “mascara conspiracy,” that no major outlets had touched what I have always presumed to be one of the many universal Secrets of Women. There are 300 million varieties of mascara at the drugstore, which only leads me to believe that there is one big vat full of mascara liquid somewhere in San Antonio where every company surreptitiously fills up their tubes together before they are branded and shipped out to unsuspecting consumers. Why do we even wear mascara? Who decided the act of darkening our eyelashes made sense? Would you put lip gloss on a bee? Get a grip. The conspiracy is real!

As all good conspiracy theorists will tell you, you cannot be above getting to the bottom of the problem first before declaring the world is flat. A good mascara, a so-called mascara expert says, is “the perfect storm of three things working in synergy: the brush, the wiper, and the formula.” I’ve found that every mascara product I’ve ever bought had been as similar as both of my raised middle fingers, but if there are mascara experts out there, surely I should seek to validate my truth.

I put myself to work. I couldn’t imagine not wearing mascara anymore, because, well, my eyes had gotten used to it. But I could at least rule out the option that one is better than the other and look toward a future of state-sanctioned eyelash wax. With 13 mascara tubes in hand — all different brands, price points, and alleged varietals in design and “science” — I tested one a day to investigate their differences.

Dear reader, here are some things that I learned. Expensive mascara (which I define as anything I didn’t lazily throw into my cart at a Walgreens without considering the $6 cost) is occasionally good in that it is versatile and works hard for the money. Cheap mascara is not great, especially if you wear contact lenses, as its gloopy remnants tend to drift into your eyes. But! There is some cheap mascara that is hardly different from some expensive mascara. I was most surprised to learn that many mascaras above the $20 price point were kind of wack: overly fragrant (why you’d ever put a scent in mascara liquid is beyond me), too liquidy, and very heavy to carry around on my eyelashes. But then there were a handful that did things that made it feel like I was wearing fake eyelashes. There were differences — small, hardly intelligible differences — but differences all the same.

So is mascara bullshit? Sort of. Is there a conspiracy still? Yeah, probably. Do with this information what you will. But never stop looking for the truth. 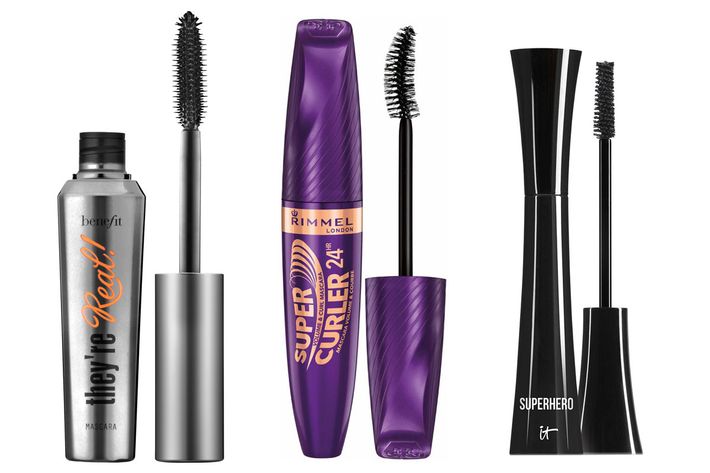 The Best Mascara to Make Your Eyelashes Look Bushy

As a person who hasn’t ever considered wearing fake eyelashes out of fear of tearing out my real ones (a thing that I was guilty of when I would get acrylic nails in middle school) or damaging my corneas, a mascara that makes my eyelashes “bushy” seemed like a good option. IT’s Superhero mascara went on gloppy and had me blinking furiously for at least four minutes until it dried, but the resulting image was like a woman with feathers for eyelashes. My eyes looked like this all day, and only the occasional drip or crust leaked into the corner of my eye. It was divine. This is what it must be like to be a goddess who flirts with her eyeballs alone.

People always talk about “makeup for every day,” which is a crazy term that I do not understand. All makeup should be for every day, but let’s not get into it. Along the lines of what I think this expression means, Benefit’s They’re Real! Mascara is a good entry in the “your eyelashes now look better than normal but also aren’t too out of control” category. There is certainly more goop and drying time than I think is necessary, but the resulting image is a set of blinkers that looks nice and normal to the average person but a little va-va-voomed to you. Probably good for either a cocktail party or a baseball game or a long walk through a junkyard. It’s also a favorite of our beauty editors.

Rimmel’s Super Curler 24 Hour was like a lot of other drugstore mascaras in that it employs the three staples of drugstore mascara design: huge weird tube, ugly, flashy outside color, and lots of hyperbolic and over-the-top qualifiers. Would this mascara last me for 24 hours? I think it did. Did it make my lashes super curly? Ever so slightly. Was it decent and exciting enough to be considered a “good” drugstore brand? Yeah, I’d say so. Clumps were there. And that was annoying, but what else can you expect from a drugstore mascara? Maybe this is what “makeup for every day” means. 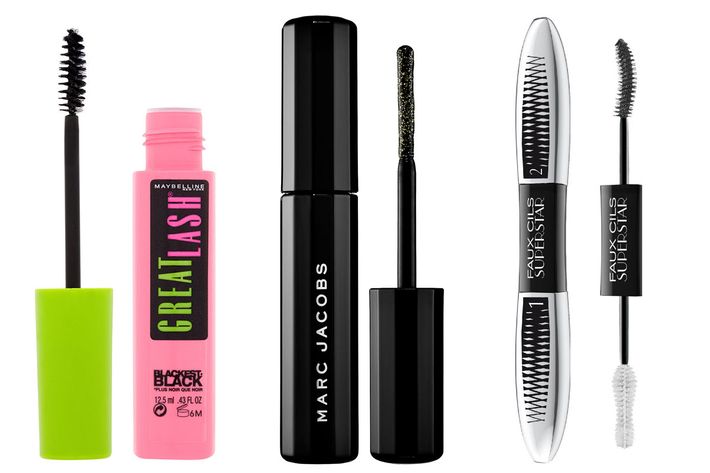 The Best Mascara to Make You Feel Like a Flashy Teen

Marc Jacobs’s Lame Noir Ultra-Glittering mascara has a brush that is shaped like a piece of long plastic (no brush feathers, it seems) and the last thing I expected was that it’d pour gold glitter everywhere. I tested this mascara as a layer over some other mascara, and to my dismay, it did not add a disco-ball effect to my already bushed-up eyelashes, but it did make it harder for me to see. When I tested it without mascara already underneath, it was a little better and a little more glittery. I felt like a flashy teen at an underage rave. That seemed different from what I normally think of when I think of mascara, so I liked it! I might throw it on the next time I plan to stay out later than 9:30.

The Best, Most Well-Rounded Everything Mascara That I Will Forever Buy

Every time I spoke to any woman about mascara, she told me, “Oh, the pink-and-green one is the best.” Are you a woman who wears mascara? I bet you know what I’m talking about when I say “the pink-and-green one.” Before I even started researching for this story, I had heard the legend of the “pink-and-green one,” and remembered having seen the tube in my mom’s makeup bag when I was little. I purchased the pink-and-green one — also known as Maybelline New York Great Lash — and it does everything I wanted in a mascara. It went on smoothly. It didn’t clump. It made my eyelashes look slightly more decent than normal. And I forgot it was there for the rest of the day. No little black dots all over the corners of my eyes. This is the one I will forever buy now, and what’s more? It’s cheap. There’s no weird fragrance. And it feels like I’m not even wearing mascara. The dream.

The Best Mascara That Made Me Freak Out (Honorable Mention)

Loréal’s Voluminous Superstar in Red Carpet Black 2-in-1 mascara made me freak out because there are two brushes, and one of them paints your eyelashes white and the other one black. Ahhhhhhhhh! I’m freaking out!

There may be 900,000 types of mascara to buy, but maybe that’s because no woman is the same. Enjoy having feathers for eyelashes? There’s a mascara for you. Like to poke your own eye out? You got it. Want to opt out of the mascara industrial complex entirely? See you at the next mascara truther meeting. It’s at a secret location. You’ll know it when you see it.

#metoo Yesterday at 4:10 p.m.
What We Know About the Disappearance of Peng Shuai After accusing a top Chinese government official of sexual assault, the tennis star’s whereabouts have become a cause of international concern.
school shootings Yesterday at 3:45 p.m.
A 15-Year-Old Reportedly Opened Fire at a Michigan High School A suspect has been charged as an adult in the shooting and death of four students.
parties! Yesterday at 3:22 p.m.
The Bestest Party Looks of the Week Hi, Machine Gun Kelly!
westward ho Yesterday at 3:08 p.m.
Playing The Oregon Trail Made Me a Murderino All those settlers dying violent deaths on their way west? So good.
friday sales Yesterday at 2:27 p.m.
18 Things on Sale You’ll Actually Want to Buy: From Everlane to Sephora Including our favorite brightening eye cream and an Eberjey-esque cotton pajama set.
new faces Yesterday at 2:10 p.m.
Blackpink’s Lisa Is Expanding Her Résumé The K-pop megastar has a new big beauty job.
By Asia Milia Ware
abortion Yesterday at 2:03 p.m.
Fact-checking the Arguments That Could Overturn Roe v. Wade An incomplete list of the abortion-related fallacies the Supreme Court heard this week.
"the fedex debacle" Yesterday at 1:11 p.m.
Delivery Driver Hurls Hundreds of Packages Into the Abyss Maybe you can kind of see their point?
hair news Yesterday at 12:36 p.m.
Billie Eilish Is No Longer Blonde Surprise!
sex and the city Yesterday at 12:23 p.m.
Why Isn’t Samantha in And Just Like That …? All the reasons Kim Cattrall did not want to be in the Sex and the City reboot.
celebrity Yesterday at 11:10 a.m.
Tristan Thompson Is Reportedly Expecting Another Child His trainer, Maralee Nichols, claims she is pregnant with Thompson’s third child.
roe v. wade Yesterday at 10:05 a.m.
Amy Coney Barrett’s Adoption Myths “What’s happening at the Supreme Court is that people are using us to further their own agenda. They’re co-opting our lives and our stories.”
rust Yesterday at 9:30 a.m.
Everything We Know About the Rust Movie Shooting In a new interview, Alec Baldwin says he didn’t pull the trigger of the gun that killed Halyna Hutchins.
are u coming? Yesterday at 8:00 a.m.
Where the Wild Things (and the Straights) Are One night at House of X, the very Manhattan alter ego to Bushwick’s House of Yes.
By Brock Colyar
advent calendar 2021 Yesterday at 8:00 a.m.
Gift of the Day: A Dusen Dusen Trash Can This trash can can brighten up any dark corner of your apartment.
¡hola papi! Yesterday at 6:00 a.m.
‘I’m So Lonely. What’s Wrong With Me?’ I like the idea of accepting loneliness as fundamental to the human condition. It takes the sense of personal failure out of the equation.
By J.P. Brammer
#freebritney Dec. 2, 2021
Britney Spears Is Doing Skits Now Introducing Britney Spears the therapist.
tabloid culture Dec. 2, 2021
Meghan Markle’s Latest Court Victory Is Just The Beginning The Duchess of Sussex vs. the Daily Mail has come to an end — for now.
sobriety Dec. 2, 2021
Demi Lovato Says Good-bye to ‘California Sober’ “Sober sober is the only way to be,” Lovato announced in an Instagram Story.
maxwell trial Dec. 2, 2021
Witness Says Ghislaine Maxwell Groomed Her at Age 14 And more key testimony from the trial of Jeffrey Epstein’s alleged partner in sex crimes.
More Stories