One of the more interesting public-opinion stories of the last 10 to 15 years has been the rapid explosion in support for gay rights — Gallup, for example, had support for same-sex marriage at 27 percent in 1996, and all the way up to 60 percent last year. Part of this story has to do with the way public opinion, personal ties, and behavior feed into one another: The more that homosexuality is accepted, the more comfortable people are coming out; the more people know a gay person, the more homosexuality is accepted, and so on. There’s a cascade effect.

But beyond the question of who identifies as gay or straight or bisexual, there’s a lot of even more complicated stuff going on under the radar with regard to people’s behavior: As acceptance for homosexuality has increased, so too has the willingness — or maybe eagerness — of people to experiment sexually. That’s the fascinating story told by a new article to be published online in the Archives of Sexual Behavior later this morning.

For the study, the psychologists Jean Twenge, Ryne Sherman, and Brooke Wells looked at the General Social Survey (GSS), a big, nationally representative survey which over the decades poses the same questions to large groups of Americans to gauge shifts in behavior and social attitudes (though different questions are asked and introduced in different years).

The researchers primarily looked at items in which respondents were asked to gauge the acceptability of homosexual activity, as well as ones in which they were asked to self-report whether they themselves had engaged in it. Many of the questions the researchers were most interested in looking at were first asked in the early 1990s, and the researchers tracked the responses through the 2014 GSS.

In an interview with Science of Us, Twenge, a San Diego State University professor and the author of the book Generation Me - Revised and Updated: Why Today’s Young Americans Are More Confident, Assertive, Entitled — and More Miserable Than Ever Before, said two things about the numbers reported in her study jumped out at her: first, the sheer magnitude of the increase in the percentage of people who said they’d had at least one same-sex experience; and, second, the specific pattern of increasing acceptance of same-sex behavior she and her colleagues observed.

First, behavior: The key finding in the study is that the number of Americans who self-reported having had at least one same-sex encounter since age 18 jumped significantly from the early 1990s to the early 2010s. For women, the percentage more than doubled, increasing from 3.6 percent to 8.7 percent; for men, it nearly doubled, going from 4.5 percent to 8.2 percent. “The increase … appeared consistently across all age groups to those in their 50s and inconsistently for those in their 60s, 70s, and 80s,” the researchers write.

“To see a doubling was a little surprising, that the shift was that big,” said Twenge. And, crucially, this increase appears to not be the result of more people identifying as “only” gay — there was “little consistent change in those having sex exclusively with same-sex partners,” as the paper notes. Rather, the increase was “largely driven by those who had both male and female partners,” pointing to an increasing tendency among respondents to at least experiment with bisexuality. Twenge and her colleagues found that while the growing societal acceptance of homosexuality over this period could explain some of the increase in same-sex experimentation, it couldn’t explain the whole thing — which suggests that other factors were also responsible (Twenge thinks the rise in acceptability of “hookup culture” might be a factor, as could increasing ages of first marriage).

The researchers also noted an interesting gender divide in the ages at which people dabbled in bisexuality. “Lesbian sexual experience is highest when women are young, suggesting there is some truth to the idea that some women are ‘lesbian until graduation’ or ‘bisexual until graduation,’ at least among younger generations such as [m]illennials,” she said in an email. “This pattern does not appear for gay sexual experiences.”

As for the acceptance numbers, Twenge said she was also a bit “surprised by the magnitude and the pattern of acceptance in same-sex behavior, because there was virtually no change between the early 1970s and 1990s — it really stayed low level and didn’t change much,” she said. “And then after the early 1990s acceptance really shot up and the change was dramatic.”

This graph shows the rate of acceptance of same-sex sexual relations from 1973 to 2014, and you can click here for a bigger version: 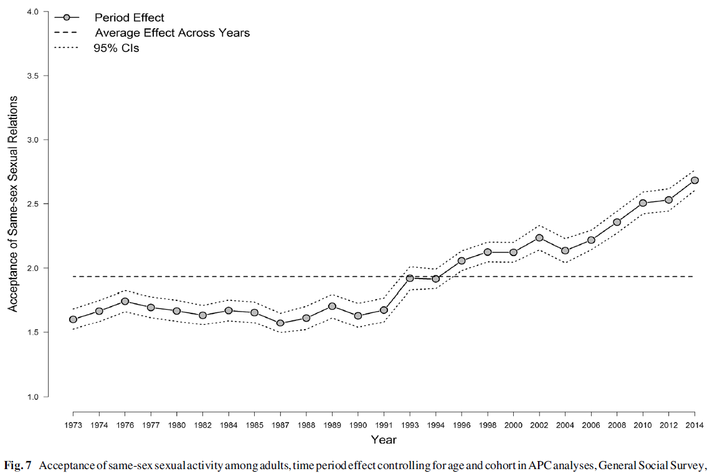 “It’s much more common for things to change at a more steady rate, but that didn’t happen here,” Twenge explained. “And I suspect it has to do with the AIDS crisis, that the AIDS crisis in the eighties set back progress in attitudes toward gay and lesbian sexuality by a few decades, and then once that wasn’t as prominent an issue at the 1990s acceptance was free to go up.”

Overall, “[t]hese trends are further evidence of the cultural shift toward individualism, which involves more focus on the self and less on social rules,” wrote Twenge in her email. “As individualism has increased, people feel more free to have different sexual experiences and are more accepting of others who have same-sex experiences.” That said, not every part of the country experiences these cultural forces at the same time, with the same intensity: Twenge and her co-authors note in the paper that it was the Midwest and the South that saw the greatest increases in the percentage of respondents who said they had experimented.

That, Twenge told me, may be partly because these were places where support for gay rights took longer to catch on in the first place. “There’s some interesting work on regional cultures that shows that the [M]idwest and the [S]outh are more collectivistic compared to the coasts, which are more individualistic,” she said. When it comes to cultural change, Twenge said there’s a stereotype that “[t]hings start at the coasts and then move inward, and I think that’s basically the pattern that’s showing up here.”

But by now — with exceptions here and there around the country, of course — the epochal changes in attitudes toward gay marriage and gay sex seem to have set in just about everywhere. And it happened fast. “This was just a really big change over a relatively small period of time,” said Twenge.

celebrity 7:08 p.m.
Ziwe and Lisa Rinna Brought RHOBH to Paris Fashion Week They were “ready to own it” in Mugler.
power 6:11 p.m.
Harvard Students Walk Out on Professor Accused of Assault Over 100 students continued to protest the reinstatement of John Comaroff, who has been accused of sexually harassing and assaulting female students.
couture spring 2023 5:20 p.m.
Seduction and Suiting at Couture Fashion Week Shows from Chanel and Gaultier by Haider Ackermann were fresh.
identity 2:22 p.m.
The Monterey Park I Remember Spending family time in the Asian-majority city helped me proudly embrace my identity.
sex toys 12:33 p.m.
27 Best Sex Toys You Can Buy Online Reviewers don’t lie.
elvis 11:48 a.m.
Austin Butler Finally Gives Credit Where It’s Due The Elvis star admitted that his ex Vanessa Hudgens was the “friend” who manifested his biggest role.
kardashian kids 11:07 a.m.
North West Is Making Her Hollywood Debut The 9-year-old will lend her voice to a character in the Paw Patrol sequel.
my two cents 8:00 a.m.
‘Do I Need to Attend All of My Boyfriend’s Friends’ Weddings?’ Start by examining your priorities.
By Charlotte Cowles
how not to f*ck up your face 8:00 a.m.
In Defense of ‘Good Enough’ Aging When good enough is plenty good. Plus, are you dealing with thinning lashes?
celebrity Yesterday at 9:04 p.m.
Gisele Bündchen and her Jujitsu Instructor Are Riding Horses Now Meanwhile, Tom Brady is still considering his retirement.
celebrity Yesterday at 8:01 p.m.
Julia Fox Has a Mice-Friendly Apartment She mentioned her rodent roommate during an apartment tour on TikTok.
ask a beauty editor Yesterday at 3:57 p.m.
Should I Worry About UV Damage While Getting a Gel Manicure? A recent study found that exposure to a UV nail-polish dryer led to cell deaths. We spoke to experts about how to protect yourself.
weight loss Yesterday at 3:47 p.m.
Chelsea Handler Says She Didn’t Realize She Was on Ozempic “My anti-aging doctor just hands it out to anybody.”
where did you get that? Yesterday at 3:26 p.m.
Aleali May on Vintage Shopping, Jordan 1s, and Cargo Pants She shares her wardrobe essentials and styling tips.
school shootings Yesterday at 2:50 p.m.
A 6-Year-Old Shot His Teacher — Now What? The teacher’s lawyer claims the school administration was warned three times that the 6-year-old had a gun.
obsessive tester Yesterday at 2:46 p.m.
The 23 Very Best Foundations for Your Skin Whether you want to look airbrushed or like you’re not wearing makeup at all.
power Yesterday at 2:14 p.m.
What to Know About the New Brett Kavanaugh Documentary After debuting at Sundance, Justice filmmakers say they’re already getting new tips.
why is your skin so good Yesterday at 12:46 p.m.
How John Legend Gets His Skin So Good He and his wife, Chrissy Teigen, often share their skin-care products.
power Yesterday at 12:08 p.m.
Esmé Bianco Settles Sexual-Assault Lawsuit Against Marilyn Manson The Game of Thrones actress agreed to settle “in order to move on with her life and career,” her lawyer said in a statement.
the hard part Yesterday at 12:00 p.m.
There Is No Break Coming for Parents — Ever New year, same shit.
By Amil Niazi
More Stories