On Thursday, Judge Aaron Persky gave Stanford swimmer Brock Turner, who was convicted of sexually assaulting an unconscious woman behind a dumpster, an unusually light six-month sentence, lest jail “have a severe impact on [Turner].” Persky also added that he thinks Turner “will not be a danger to others,” a perception that was perhaps aided by the letters friends and family wrote in support of him.

The Cut previously posted the letter Turner’s father wrote, in which he refers to his son’s crime as “20 minutes of action” and bemoans the fact that he no longer has the appetite to enjoy steak since his felony sexual-assault conviction. A source also provided the Cut with a letter from Turner’s childhood friend Leslie Rasmussen to Judge Persky. In it, she includes a photo of Turner smiling and says there’s no way Brock could ever be a rapist, because “he was always the sweetest to everyone,” going so far as to call “the whole thing a huge misunderstanding.”

She blames accusations of campus rape on political correctness, writing:

I don’t think it’s fair to base the fate of the next ten + years of his life on the decision of a girl who doesn’t remember anything but the amount she drank to press charges against him. I am not blaming her directly for this, because that isn’t right. But where do we draw the line and stop worrying about being politically correct every second of the day and see that rape on campuses isn’t always because people are rapists.

Rasmussen also says that alcohol-fueled sexual assaults perpetrated by young college students are not the same as when a woman is abducted and assaulted:

This is completely different from a woman getting kidnapped and raped as she is walking to her car in a parking lot. That is a rapist. These are not rapists. These are idiot boys and girls having too much to drink and not being aware of their surroundings and having clouded judgement.

You can read Rasmussen’s letter in full, below, and Turner’s victim’s harrowing letter to him here. 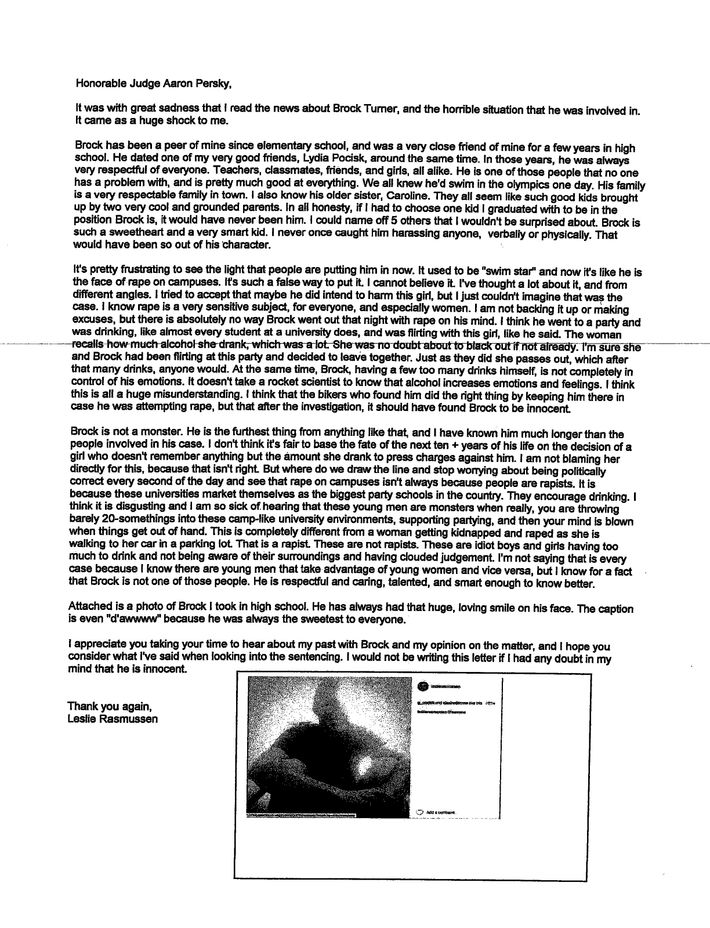