How do you get people to put effort into tasks they find boring and pointless? It is an eternal human question, and there’s still a lot of uncertainty about what the best answers are. But in a really cool, nicely executed study, the economists Stefano DellaVigna of the University of California, Berkeley, and Devin Pope of the Booth School of Business at the University of Chicago took an experimental approach to motivating strangers to perform a truly boring, thankless task.

Published on VoxEU.org (hat tip to Chris Blattman), DellaVigna and Pope’s study sits in the broader field of behavioral economic “nudges,” or the idea that people’s behavior can be affected by subtle tweaks to their environment, or — more relevant here — to the language they encounter on forms, in the workplace, and elsewhere. To test the effects of various nudges, the researchers set up a highly oversimplified “workplace” scenario: They recruited almost 10,000 Amazon Mechanical Turk workers and asked them to “press the ‘a’ and ‘b’ buttons on their keyboards as quickly as possible for ten minutes.” If you think about it for a moment, you’ll realize that that would feel like an eternity.

To encourage the participants, the researchers presented them, at random, with one of 18 different sentences offering various incentives and pieces of information (unfortunately, this was the largest image available). 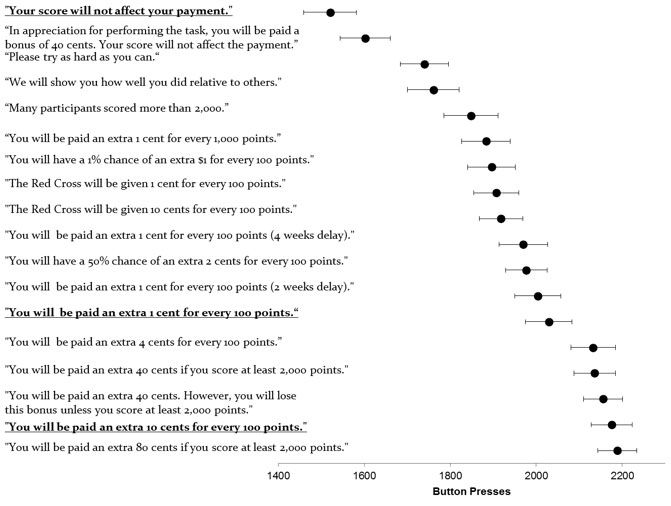 In addition to the not-surprising result that people respond to monetary incentives, a few things jump out:

—Just asking people to try made a difference, as did mentioning the prospect of informal competition. When you think about it, this is a little bit weird. Why should some stranger running an Amazon Mechanical Turk task asking you to try hard motivate you? And why should seeing how well you did on a pointless task relative to a horde of anonymous strangers? This is what nudge-fans talk about when they express enthusiasm for small wording changes.

—Workers responded more to big numbers. The most “successful” language involved the prospects of relatively large sums (by the task’s standards) — 4 cents per 100 points, or 40 cents for hitting the 2,000-point benchmark. The benchmark thing seemed particularly powerful: When people knew they had a specific goal to hit, they were much more likely to score within the higher ranges.

It’s hard to translate these insights neatly into the workplace, of course. Here, participants were asked to perform a task exactly once for a faceless stranger; office work involves going in or logging on day after day, navigating various personalities, dealing with burnout, and so on.

But some of this fits into prior behavioral econ findings: People respond well when you tell them they’re not doing as well as their neighbors at something, for example. And rewards framed as large chunks are easier to parse and make more of a cognitive impact than smaller, incremental ones — even if the eventual amounts are the same. There are some lessons here, in other words, even if you’re not a supervisor at a weird factory that produces a-b button pushes.

How Do You Encourage People to Do Pointless Tasks?