This is a bit of a full-circle moment for costume designer Paul Tazewell: He began his Broadway career with one of the revolutionary musicals of its time, Bring in ‘da Noise, Bring in ‘da Funk, and now, 20 years later, he’s again designing for a game-changing show, Hamilton. “It feels like the culmination of everything coming together,” Tazewell says. And while Tazewell has worked on his share of hip-hop musicals (besides the aforementioned two, he designed for Lin-Manuel Miranda’s In the Heights) he was excited to embrace period design for Hamilton. “I love re-creating as a means of storytelling,” he says. “It’s like a fantasy — putting your mark on how a period is emulated. It’s just, how do you use it in a smart way to tell a story happening in front of you?”

Though Tazewell was attached to Hamilton from its earliest readings, it wasn’t until the show set up shop in the Public Theater that he found his design direction. “The Public has a huge stash of period costumes, so we said, ‘Let’s see if we can get a look that feels somewhat 18th century, and what will that feel like to have the whole cast in that silhouette all the way through,” he recalls. It quickly became clear that the visual neutrality of unfussy period looks would allow the audience to focus on character, not corsets. “It’s the ghost of the period that wafts through,” Tazewell says. “You’re aware of a modern essence and a period essence operating together.”

That blend permeates Hamilton, from the so-called “parchment looks” that begin and end the show (a parallel to Hamilton as insatiable writer, confronting the blank page, and also “the blank page of who these characters are”), to the female characters’ differing necklines (Eliza’s dresses have wide, open necklines, reflecting her open heart; Maria Reynolds’s low-cut dress is, well, all about cleavage), to subtle contemporary touches in the uniforms the male and female ensemble members wear (corsets and form-fitting leggings for the women; bare arms for the men).

Tazewell has received his sixth Tony nomination for his Hamilton designs (he’s already a recipient of several other theater world accolades, including a Princess Grace Foundation statue); prior to this weekend’s Tony Awards, he shared his costume sketches and spoke about his designs for Hamilton’s principal characters.

The pure-hearted Eliza appears mostly in cool blue tones, “because I find light blue a very sympathetic color,” Tazewell explains. “It’s true — like true blue.” He also liked the way the color pierced through the reds and browns of the set. “Eliza stays very clean, and I like how that plays off everybody else.”

“Lin’s main thing was that Hamilton at some point be represented in green, the color of money,” Tazewell says. “Other than that, he left it up to me and Tommy [Kail] and the rest of the collaborators as to what we saw visually.” Perhaps more than any other character, Hamilton’s costumes reflect his economic ascendency: When he first appears, fresh off the boat, he’s in distressed brown suede; “you get the sense that he’s scrappy.”

Jefferson’s costume changed the most. Tazewell originally conceived of a medium-to-dark-brown palette, “because of his connection to the earth: He was a farmer and he seemed very grounded to his plantation.” But once Tazewell saw Daveed Diggs’s electric performance, he and Kail shifted their thinking. “We decided he needed to feel like more of a rock star,” Tazewell says. “Some of it was inspired by Daveed’s hair, too. It’s a bit like Jimi Hendrix or Prince, so we thought, let’s put him in purple and see how that projects.” 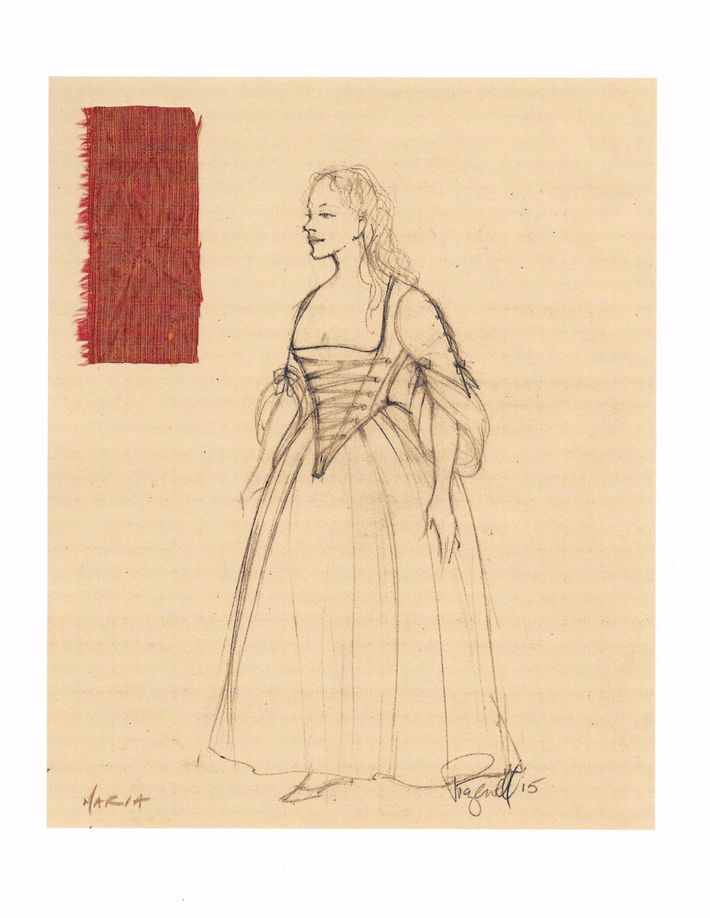 “It was about trying to arrive at a classic hussy feel,” Tazewell says with a laugh of Maria Reynolds’s red. “You’re always comparing the silhouette from character to character. When you compare Eliza to Maria, there’s more texture in Maria, more forward color — all that is sexy and that Hamilton would be drawn to that contrasts with his wife.” 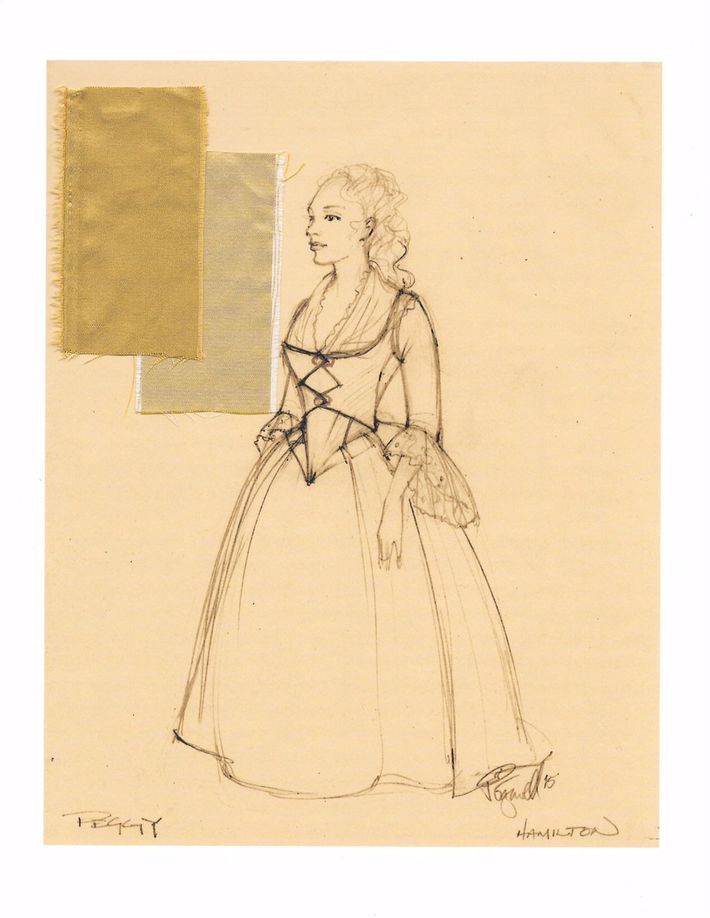 For the tertiary Schuyler sister, “It’s just like, Well, okay, let’s make her yellow and see how it works,” Tazewell says with a laugh. “She’s youthful, and I’m not a big fan of baby-pink.”

tv 6:23 p.m.
Here’s Sebastian Stan on Filming With an Animatronic Penis The actor had a one-of-a-kind experience filming Pam & Tommy.
valentine's day 3:11 p.m.
58 Gifts for the Person You Love They deserve the world, but these picks will work too.
celebrity 1:59 p.m.
Finally, Something Bono and I Can Agree On He is apparently embarrassed by “most” of U2’s music.
news 1:56 p.m.
Cardi B Offers to Pay Funeral Costs for Bronx Fire Victims Last week’s apartment fire left 17 people dead and over 60 injured.
self 1:15 p.m.
I’m Tired of Explaining Why I Don’t Drink We have to expand our language beyond “sober.”
By Sarah Wood
remembrances 12:39 p.m.
The Fashion World Remembers André Leon Talley Designers, writers, and celebrities paid tribute to the inimitable fashion icon, who died on Tuesday at 73.
vampires 12:08 p.m.
Megan Fox’s Engagement Ring … Bites? “The bands are actually thorns. So if she tries to take it off, it hurts.”
celebrity 11:03 a.m.
Tracing the Ongoing Feud Between Britney and Jamie Lynn Spears Things spiraled out after Jamie Lynn went on Good Morning America to promote her new book.
style 9:35 a.m.
Anna Wintour Remembers André Leon Talley The Vogue editor mourned her friend and former colleague, calling him “a brilliant and compassionate man.”
in memoriam 8:33 a.m.
André Leon Talley Has Died The former Vogue creative director and editor passed away unexpectedly this week at the age of 73.
culture Yesterday at 8:10 p.m.
There Really Is a Coordinated Online Attack on Meghan Markle A new analysis found that the Duke and Duchess of Sussex were the targets of a strategic, monetized social media campaign against them.
euphoria Yesterday at 6:31 p.m.
8 Pieces You Can Shop From Episode 2 of Euphoria By Kim Shui, Réalisation Par, Nodaleto, and more.
fashion Yesterday at 6:24 p.m.
All Signs Point to a Big Year Ahead for Aimé Leon Dore The cult menswear brand has a New Balance collection in the works and LVMH money in its pocket.
engagements Yesterday at 6:13 p.m.
What Is Machine Gun Kelly Hiding? The story of his proposal to Megan Fox isn’t adding up.
the grammys Yesterday at 4:56 p.m.
The Grammys Are Back On The awards show has been pushed to April — and will now take place in Las Vegas.
health Yesterday at 4:45 p.m.
Everything to Know About Rapid At-Home COVID-19 Tests Americans are finally eligible to receive free rapid tests.
power Yesterday at 2:09 p.m.
The New York Post Gets Its Own Tabloid Scandal A former top editor sues, saying the paper’s notorious former boss was welcomed back after sexually harassing her.
By Shawn McCreesh and Angelina Chapin
movies Yesterday at 2:00 p.m.
Daniel Radcliffe, We Are Ready for Your Music Career The actor will be portraying Weird Al in an upcoming biopic.
the bigger picture Yesterday at 1:34 p.m.
Wrestling Has a Dark Side. But for Some, It’s a Safe Space. Photographer Sofie Vasquez spent a year traveling the country, documenting the indie-wrestling scene.
By Bindu Bansinath
keeping up with the royals Yesterday at 1:29 p.m.
Uh, Prince Andrew Has a Teddy Bear Collection? A new documentary claims he yelled at staff who didn’t arrange his stuffed animals to his liking.
More Stories