Big magazine assignments on attractive and “fresh-faced” female celebrities used to be reserved exclusively for men over 50 with something to prove and an overabundance of Viagra. Want to learn how literally any Hollywood starlet has both ample breasts and abundant talent, without gleaning anything noteworthy about her? Look to any number of profiles of female celebrities written by men.

But you’re in luck: Use the Cut’s exclusive Mad Libs men’s-magazine profile generator, and you too can write a profile of an attractive female celebrity — steak, emptiness, solipsism, and bullfighting included. Hop to! Your deadline approaches!

Fill in each field:

A Mad Libs Profile of An Attractive Female Celebrity, as Written by a Man 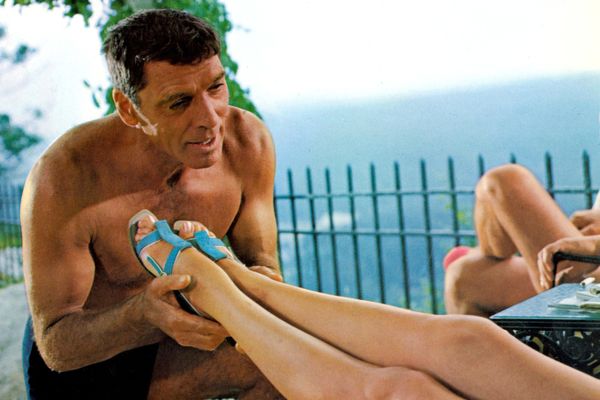 Legend has it that when trappers first came upon the mountain range we know now as the Grand Tetons, they believed them to resemble a particular part of the female anatomy, so they named them the Great Boobs Mountains. Many a man has tried to capture the majesty of Great Boobs Mountains in words, and much like attempts to describe the adjective1 beauty of female-celebrity-name, most fail. Noble man that I am, I present my attempt at doing both.

Like a mountain pushing through a passing cloud, female-celebrity-name walked into the secluded restaurant on the Malibu coast that I was sitting in, looking like a item-of-food. She was adjective2, adjective3, and adjective4, and though she is age2, she doesn’t look a day over age1. Her signature body-part1 were practically glistening in the morning air, and as she verb1 toward me, I remembered the first time I saw the Grand Tetons and tried in my head to compare them to female-celebrity-name. They are, I mused, nothing compared to her. She grinned at me adverb, and I felt a part of my steely heart melt into brown goo.

female-celebrity-name isn’t all about sex appeal. The first thing she said as she entered the booth across from me at this secluded Malibu coastside restaurant is — well, I don’t remember, because I wasn’t listening. But I did notice as she ordered a drink1, she ordered it like a man: straight up and ballsy. She was wearing a clothing and the getup fit her like a glove. I could tell that she was about to woo me with her adjective5 conversation. I braced myself for contact. Is this woman the new older-actor?

“Loud, unintelligible noise,” she said, and she smiled because she thought I’d heard her. Isn’t that sweet? What I was really thinking about was dumb1 and dumb2 and of course, touching her body-part2, but aren’t we all? She exists to be consumed: She’s the new older-actor. I saw female-celebrity-name in her latest film, a film for which she surely deserves several award-type. female-celebrity-name acts her little heart out: She’s like if my sister were hot and I could bonk her. In fact, she’s like America’s little sister. She’s the sister that we all wished we had — and we are all dying to bonk her.

The thing that most people don’t realize about female-celebrity-name is that she wasn’t born and bred in Los Angeles like some sort of magical sexy robot for our viewing pleasure. No, no. Not the case, sir. She is from a place, and that place is random-town. Her mom was a job1 and her dad was a job2 and she was the third of six siblings. She’s a zodiac-sign but what do you care about that? It’s not important. She made it out of there and onto the silver screen. Here, I will take a short break to describe, in length, a boxing match I once saw in a hearty town full of culture, like Rome or Savannah.

Anyway. Back to this woman, if we can even call her that, because she is more like a animal. She made it out of random-town before she graduated high school, knowing that the Hollywood life was for her. “Whirring, buzzing, droning sound,” she told me about her childhood dreams and struggles to make it in the acting business over her second drink. “Screeching! Impossible screeching!” I get her. I really do. Like this adjective6 actress, I had dreams at that age. And now I just write sloppy magazine profiles to pay for my VR porn habit. But hey, here we were, at this little restaurant off the coast of Malibu, talking mano a mano. I realized that we’re level with each other, and I’m feeling confident, so I ordered a drink2. I told her, in great detail and length, the story I told you about the boxing match in Savannah or Rome. She was rapt. I began to consider this encounter with female-celebrity-name a date. I ceremoniously smirked, and swirled my drink3 in the center of my palm.

Which reminds me: Many people have speculated that female-celebrity-name has been cavorting with male-celeb. When I prodded her on this subject multiple times, she simply laughed it off: “No, I’m not seeing anyone right now,” she told me. It is the only thing I heard her say all night. And I heard it clear as day, as clear as sands leaking through an hourglass, which coincidentally, female-celebrity-name’s body is the same shape as. I’m talking about her Grand Tetons, if you catch my meaning.

As we parted ways at this gorgeous unnamed and nondescript restaurant off the Malibu coast, she turned around to flash me her winning body-part3 that some might argue made her career. I would argue that, too but she’s built of tougher stuff now. She mouthed something — what was it? It sounded like, “Yadda yadda yadda,” in her breathy growl — and she smiled. female-celebrity-name isn’t just the adjective7 new Hollywood actress. She’s the greatest one, too. And I gotta say, I like the way she looks in a bathing suit.

A Mad Libs Profile of a Female Celeb by a Man

action item 11:45 a.m.
How to Help Those Impacted by Hurricane Ian As of Friday, nearly 2 million people in Florida were still without power.
always shopping 11:30 a.m.
15 Classic Wool Coats Under $400 Because it’s getting cold out there.
By Andrew Nguyen, Devine Blacksher, and Bianca Nieves
health 11:00 a.m.
The Myth of Adrenal Fatigue The “condition” touted by the wellness industrial complex could explain everything you’re feeling — if only it were real.
By Annaliese Griffin
holiday gifts 10:30 a.m.
35 Gifts for Literally Any Man in Your Life Foolproof options, whatever the occasion.
By Andrew Nguyen and Chinea Rodriguez
celebrity 10:10 a.m.
Sounds Like Hailey Bieber and Selena Gomez Are at Peace On a new episode of Call Her Daddy, Bieber denied the rumors that she and Gomez are feuding after she “stole” Justin Bieber.
how i get it done 10:00 a.m.
How Hanifa Designer Anifa Mvuemba Gets It Done During Fashion Week “My team knows when I’m in New York it’s for work, but it’s also me enjoying myself.”
By Asia Milia Ware
extremely online 10:00 a.m.
I Can’t Shut Up About Kim Trying to Walk in This Dress There is something deliciously humbling about watching a full-blown adult bunny-hop up some stairs.
keeping up with the kardashians 10:00 a.m.
Khloé Says She Turned Down Tristan’s First Marriage Proposal Though reports say they may have been secretly engaged when his paternity scandal broke.
seeing someone 8:00 a.m.
Why Are All Men Trash? This attitude is probably not going to help you find love.
By Randa Sakallah
fashion 7:05 a.m.
The Next Met Theme Will Be Karl Lagerfeld’s Six-Decade Career “Karl Lagerfeld: A Line of Beauty” will explore his stylistic language as it was expressed in drawings and realized in clothing he created.
¡hola papi! 6:00 a.m.
Hola Papi: ‘Nothing Is Going Right For Me’ “In living a life, there are bound to be many, many mistakes. Maybe mistakes isn’t even the right word for our trials and errors. They are steps.”
By J.P. Brammer
pfw spring 2023 Yesterday at 5:14 p.m.
The Best Street Style at Paris Fashion Week See our favorite looks from outside the shows, from Crocs to head-to-toe Dior.
By Olivia Luppino
student loans Yesterday at 4:25 p.m.
How to Get Your Student Debt Canceled Applications for student-debt cancellation should be available in early October. The sooner you file, the better.
culture Yesterday at 4:20 p.m.
Did Olivia Wilde Just Make Jordan Peterson Cry? Don’t worry, incels — Peterson’s got your back.
obsessive tester Yesterday at 2:51 p.m.
27 Best-Smelling, Bubbliest, Most Soothing Bath Products According to someone who takes two baths a day.
By Jane Larkworthy, Erica Smith, and Kathleen Hou
style Yesterday at 1:55 p.m.
Hey Fashion Friend: How Do I Dress for the Weather Right Now? Try a short-sleeved mock neck before a turtleneck.
By Emilia Petrarca
holiday gifts Yesterday at 1:39 p.m.
31 Gifts for a Bunch of Super-Specific Life Phases From the friend posting their sonogram to the sibling stumbling through their Saturn return.
By Erica Smith and Chinea Rodriguez
oh no no no Yesterday at 1:27 p.m.
Drew Barrymore’s Pizza Salad Is an Abomination People are having very strong reactions to her latest TikTok.
pfw spring 2023 Yesterday at 1:22 p.m.
The Row: An Antidote to Too-Muchness in Paris Plus, Cher headlines the Balmain festival.
By Cathy Horyn
society pages Yesterday at 1:01 p.m.
Beyoncé and Ms. Tina Cheered on Solange at the Ballet Last Night Inside the tenth anniversary of the Fall Fashion Gala.
By Emilia Petrarca
More Stories