One of the funniest things about being a tall, goofy person with a long history of wild gesticulation is that the more animated a conversation gets, the more likely I am to knock over a glass of red wine at a dinner table or accidentally wallop a stranger on the subway. Beyond being a real hit on dates or interviews, it’s an embarrassing piece of the growing pile of evidence that gestures are cognitive, an idea with an impressive amount of psychological literature behind it.

Traditionally, speech is framed as a love affair between mouth and mind, with no role for the rest of the body; there’s a reason that the people yelling on Fox News and CNN every day are called talking heads. Thanks to Rene Descartes and a pantheon of very serious dead white men, Western intellectual history has long maintained that thought is something that happens only in the kingdom of the brain; it’s just the body’s job, as educator Ken Robinson famously quipped, to bring the brain from meeting to meeting. But your hands suggest otherwise.

The University of Chicago psychologist Susan Goldin-Meadow has spent much of her career trying to grasp (yes, pun intended) what’s happening when people talk with their hands. As Goldin-Meadow defines it, “co-speech gesture” is different from action, like grabbing a cup of coffee or combing your hair, and it’s different from movement for movement’s sake, like in dance, ritual, or exercise. The gestures that hearing people make are also quite different from sign language; in signing, Goldin-Meadow says, there are distinct units of expression, and signs only relate to other signs. But with gesture, hand movements blur together, and they only really make sense relative to what someone’s saying. “Gesticulation isn’t divorced from speech. It’s completely tied to your speech,” Goldin-Meadow tells Science of Us. “It’s part of your cognition. It’s not just mindless hand-waving.” Researchers haven’t yet pinned down exactly how this connection works, but Goldin-Meadow believes part of it is that gestures reduce what psychologists call “cognitive load,” or the amount of mental energy you’re expending to keep things in your working memory.

Goldin-Meadow started her career studying “home signers” — deaf children of hearing parents who, unexposed to standardized sign language, develop their own individual signed speech — and has since traced gesture’s many roles in learning and speaking. She and her colleagues have found that when toddlers point at objects, they’re more likely to learn the names for things; that for adults, gesturing as you try to memorize a string of numbers prompts better recall; and that when grade-schoolers gesture, they’re better at generalizing math principles. 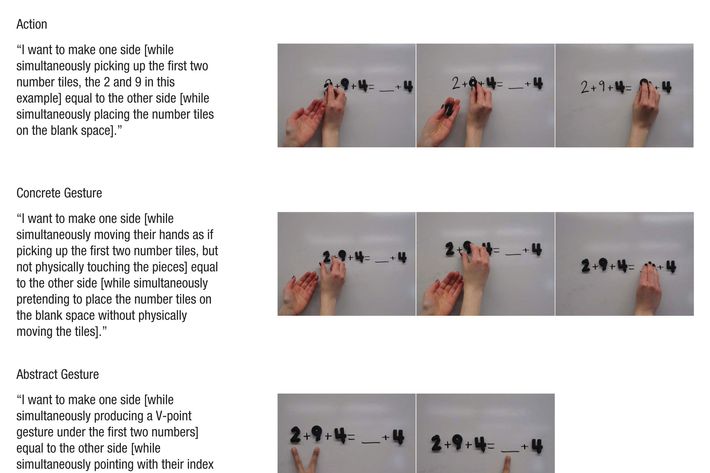 In that last study, Goldin-Meadow and her colleagues split 90 third-graders into three groups to learn how to balance either side of an equation (i.e., 2+9+4=__+4). In the “action” group, students, following the example of an instructor, physically held and moved plastic numbers on a whiteboard; in the “concrete gesture” group, students mimed that same movement of numbers without actually touching the objects; and in the “abstract gesture” group, students made a v-shape with their hands (like a peace sign) to plot out their calculations.

The authors found that the students in both gesture conditions were more likely to succeed on follow-up generalization problems, which required understanding the underlying principle beneath the first problem and applying it in novel situations. It’s a case study in how gesture “allows you a space for abstraction,” Goldin-Meadow says. “You’re not as tied to the particulars of an item, of a problem, a word, or an experience.” You’re not just talking with your hands, in other words; you think with them, too.

Talking With Your Hands Makes You Learn Faster