In the great Taylor Swift–Kanye West–Kim Kardashian drama of the already-over-the-top scorching summer of 2016, we believed that after a day or two of shit-stirring, things would go relatively back to normal and we could move on to newer, more exciting dramas. But how arrogant we were to try to put a bookend on the moon landing. This ain’t over until the petty goddesses say its over.

And with that, we bring you one of the more upsetting responses to the long-brewing beeves between Taylor and Kim and Taylor and Kanye. Taylor Swift’s BFF, Abigail Anderson, whose name I thought I dreamt up when imagining what Taylor Swift’s best friend’s name was, sent out some ill-advised tweets last night that had to do with God, parenting, and North West. Hmmm. How about … don’t.

The tweets began “I pray God helps your daughter understand … ” and ended “because not every man thinks like him.” If Kim Kardashian wanted your prayers and parenting advice, Abigail, I’m sure she would have asked. 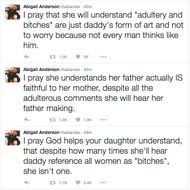 Unsurprisingly, the prayers have been deleted and replaced with a defense of some sort. #BlessIt

Guys...I will always stand by my best friend. There's no point in fighting over than. #BlessIt

power 1 min ago
‘Pro-Life’ Candidate Denies Report That He Paid for an Abortion Herschel Walker’s own son denounced him after an alleged ex-girlfriend told the Daily Beast that Walker had paid for her abortion.
always shopping 3:30 p.m.
12 Best Pairs of Leggings for Running in the Winter We spoke with runners to round up the warmest leggings so you don’t have to.
blackpink 3:01 p.m.
What’s Going on With BLACKPINK’s Leaked-Photo Drama? Everything to know about Jennie and V’s photo leak.
style 2:54 p.m.
Gigi Hadid Called Out Ye for ‘Bullying’ After His YZY Show Ye went after Vogue contributing editor Gabriella Karefa-Johnson on Instagram after she disapproved of his “White Lives Matter” shirt.
always shopping 2:30 p.m.
The Cut Shop’s Favorite Black Boots The kind you can wear every day.
divorce rumors 2:22 p.m.
Gisele Bündchen and Tom Brady May Be Over for Good A new report claims Bündchen and Brady have hired divorce attorneys.
breakout 2:00 p.m.
Paulina Alexis Doesn’t Care If You Think She’s ‘Too Rez’ The Reservation Dogs actress won’t let anything — or anyone — get in her way.
By Simon Moya-Smith
ask a boss 12:00 p.m.
‘How Do I Say No to Administrative Tasks That Aren’t My Responsibility?’ Once you start doing them it can be hard to stop, because you become the person with the track record of doing them well.
q&a 11:57 a.m.
Lio Tipton Is Still Processing The A Friend of the Family actor breaks down their approach to the true-crime genre.
rip 11:08 a.m.
Loretta Lynn, Country Legend, Dead at 90 Her raw and feminist country songs influenced generations of performers.
culture 10:15 a.m.
Where Did Don’t Worry Darling Go Wrong? Hollywood feminism strikes again.
first person 9:00 a.m.
Easy Target I was harassed and assaulted in broad daylight. Would bystanders have intervened if I was white?
By Vanessa A. Bee
"try everything" — shakira 8:50 a.m.
Bye, Guy In their first video as an official trio, the Try Guys say they were just as shocked by Ned Fulmer’s behavior as you were.
cut covers 8:00 a.m.
The Pain and Glory of Cori Bush In less than two years, the congresswoman built a base of power in D.C. by wearing her hardships on her sleeve.
By Rita Omokha
wtf Yesterday at 7:16 p.m.
Everything We Know About Kanye West’s Harmful YZY 9 Show At his YZY 9 show, West printed on shirts a slogan used by white-supremacist groups.
review Yesterday at 6:38 p.m.
Balenciaga Says, ‘Here’s Mud in Your Eye’ Demna toasts the wild and real.
By Cathy Horyn
power Yesterday at 5:57 p.m.
Iranian Forces Led Brutal Crackdowns Against University Protestors Despite forceful government intervention, women continue to take to the streets in defiance of government orders.
fashion Yesterday at 5:46 p.m.
Beyoncé Gave Us, Ahem, Some Visuals It’s a new Tiffany & Co. campaign, but still!
always shopping Yesterday at 5:15 p.m.
17 Work Blazers to Wear This Fall They’ll make even jeans and a T-shirt look professional.
By the Cut
power Yesterday at 4:52 p.m.
Everything to Know About the WNBA Star in Russian Custody As negotiations for Brittney Griner’s release continue, a Russian court has set a date for her appeal.
More Stories