Back in February, after Leonardo DiCaprio finally nabbed his elusive first Oscar for his role in The Revenant, he dedicated about half of his acceptance speech to the subject of climate change. It was: “Climate change is real — it is happening right now,” he said. “It is the most urgent threat facing our entire species, and we need to work collectively together and stop procrastinating.”

Okay, whatever. Another celebrity with a cause. Except according to a new paper published in PlOS ONE, DiCaprio’s speech caused immediate, giant spikes in climate-change-related tweets and Google searches — spikes that may well translate to at least a bit of real action and education.

The research team, led by Eric Leas of the University of San Diego School of Medicine and John Ayers of San Diego State, tracked Googles searches, news articles, and Twitter activity related to climate change in the wake of DiCaprio’s speech, comparing those numbers to what they looked like during two events that might be expected to suddenly jerk the number of climate-change-related content upward: the U.N.’s 2015 Conference of the Parties (COP) climate-change negotiations and Earth Day. 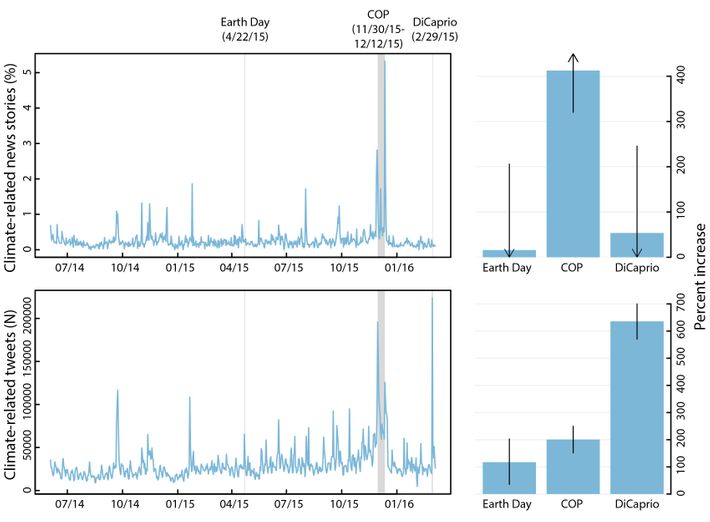 Perhaps unsurprisingly, the internationally covered COP generated more news, but DiCaprio’s speech led to an explosion on Twitter. The same effect was seen with Google searches. As the researchers explain, running down their primary findings (“CI” means “confidence interval,” and you can basically ignore it here):

The pessimistic way to look at this is to say: So what? People search for stuff all the time and it doesn’t necessarily translate to action. But what’s interesting about search spikes of this magnitude is that even if only a tiny percentage of the searchers and tweeters go on to do something, or to learn more about climate change, that’s a lot of bang for the buck for a couple of minutes’ worth of an acceptance speech.

This is not, of course, a substitute for real action on climate change. But it’s another interesting counterexample to the general, well-supported idea that awareness is overrated — on top of similar work some of these same researchers have done about awareness days and Charlie Sheen’s HIV announcement. Lecturing people about climate change (or anything else) often doesn’t work. But sudden, surprising, high-profile focusing events seem to have some potential.