Every fall in New York brings its share of new big-box outposts, and this one is no different, with Target and Saks expanding downtown. But the city still has plenty of more-independent-minded ventures moving in. The months ahead will see openings of a design obsessive’s home-goods boutique in the West Village and a reggae-focused vintage-record shop in Lefferts Gardens.

Side by Side
Big upgrades — a renovation and a new location — for two big department stores. 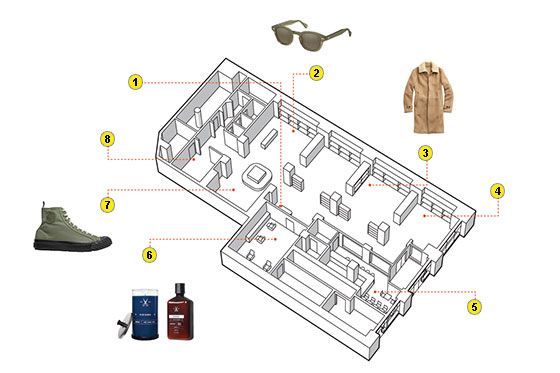 “A lot of bigger men’s retail spaces can be intimidating, so I decided to make this a bunch of smaller shops inside the larger one. There’s going to be a shoe shop for our nubuck P.F. Flyers ($149), a denim area for our indigo selvedge denim ($195), a Moscot eyewear shop (because I only wear Moscots), and a barbershop all cordoned off by charcoal shelves layered with flannel. There’s also a tailor shop where we’ll do made-to-measure, which brings my career full circle because I started off in fashion working at a tailor in Des Moines. There’s a 25-seat bar, so guys could come just for a drink or stop by after shopping. But my favorite part is the floor. I’m friends with the guy from LV Wood — we did our first fashion show in his office — and he made me an oak called ‘fumed hakwood.’ He achieves the perfect color by putting the wood over a flame to burn it, as opposed to staining. It looks like lightly burnt toast.” 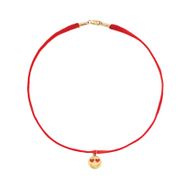 Why emoji?
“Jewelry is all about finding ways to express yourself, and emoji are the new way of communication. The funny thing is that this all started with BlackBerry emoji three and a half years ago. Since then, I’ve added ones like poop rings ($500) and pink velvet chokers with a heart-eyes smiley ($250). But at this point, it’s more about telling a story with images than copying new emoji. I have ‘screw’ studs ($430) and ‘love u’ bangles ($2,400). I just made this pair of pink-and-green earrings for fun, so I’ll have one-off stuff like that in the store. My favorite emoji right now has to be the new blue shooting star, but I’m not sure if I’ll make a piece out of it.”

Three in One
North Sails 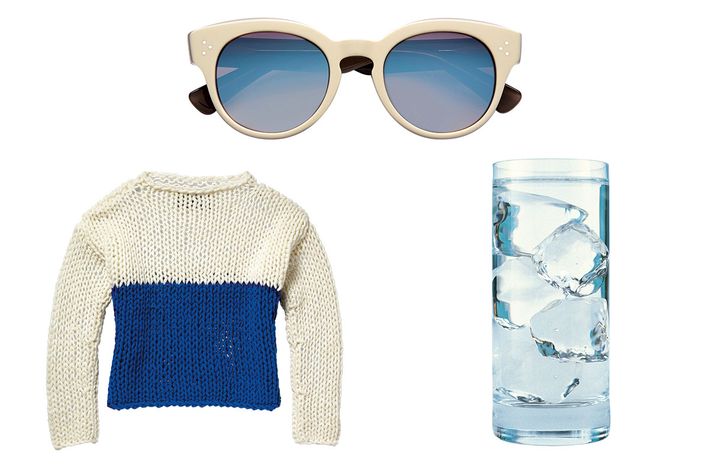 1. Performance Clothing: Men’s double-hooded jackets — one lightweight, one heavier — depending on the conditions (from $325); women’s reflective, water-repellent hydrowool sweaters (from $110) and neoprene raw-edge dusters (from $175) displayed over sailboatlike teak flooring and wire-rigged shelves.

3. Water Bar: Bottled water from Canada, Italy, New Zealand, and Norway (from $2) to compare how waters taste around the world; educational events and presentations from top sailing talent.

Side by Side
Two new makers of handcrafted shoes — one Australian, the other Italian — come to Soho.

Setting: Video montages featuring the shoemakers; espresso, cappuccino, and other Italian treats; new layout and displays every week with each new shoe release.

R.M. Williams
152 Spring St.; Sept. 3
Story : Founded in 1932 by R. M. Williams, an entrepreneurial bushman who wanted to make boots that would survive the harsh conditions of the Australian outback.

Setting: Bespoke counter to customize boots; an installation by artist Mika Utzon Popov, who built a sculpture depicting what the outback looks like from above. 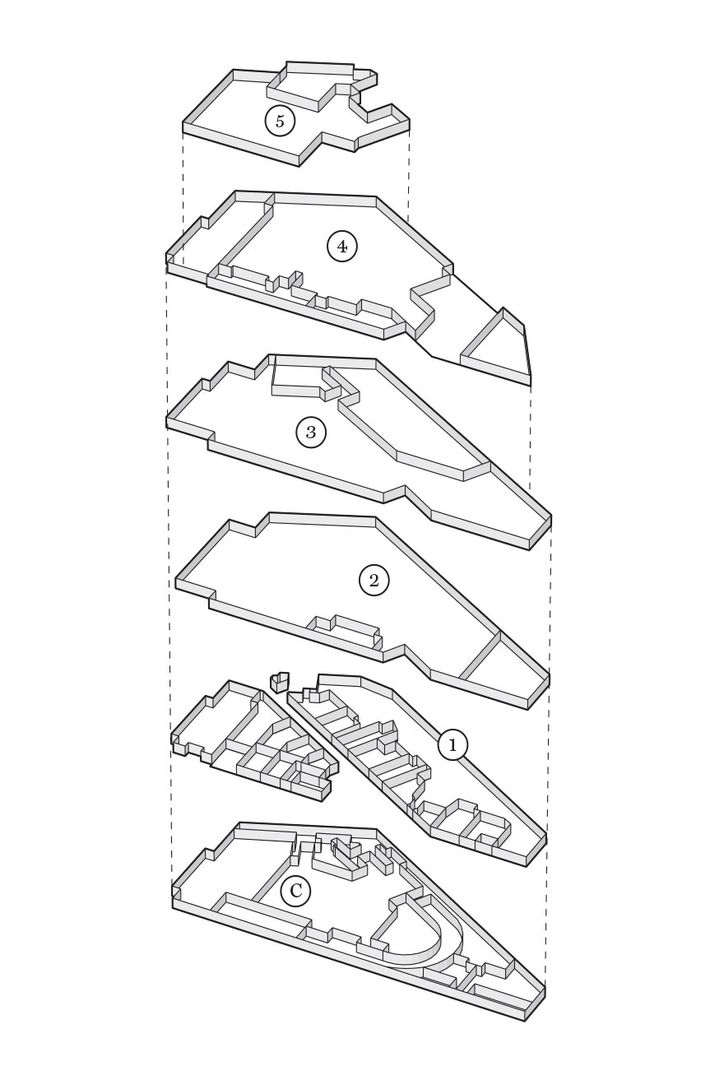 Basement
Trader Joe’s: Groceries like blueberry poppy-seed cookies ($4) and spatchcocked lemon-rosemary chicken ($4.50 per pound) in an underground space even bigger than the nearby Court Street location.

“We screen-printed the Texas artist Alyson Fox’s designs onto these cotton and linen tea towels ($18). I love that they’re this daily-use item that’s artwork in its own way.”

“My partner Paul and I designed a collection of vases that could be beautiful even without flowers. But I do love the wide-mouthed one called Up ($110) filled with peonies in the spring.”

“This splattered dinnerware (from $34) is inspired by Jackson Pollock. Some small side plates mixed in with your other dishes is a great way to layer in pattern without it being too overwhelming.” 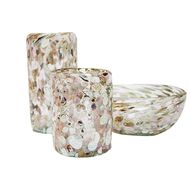 “Before these glasses (from $14) are shaped into cups, they’re rolled in glass chips to create a confetti pattern. The small ones are really beautiful as votives because of how the light shines through.” 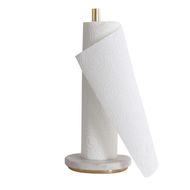 “I’ve bought nice-looking paper-towel holders before, and they’re always too lightweight. The marble adds a nice hefty weight, and it’s fun to have a luxurious utilitarian item ($120).” 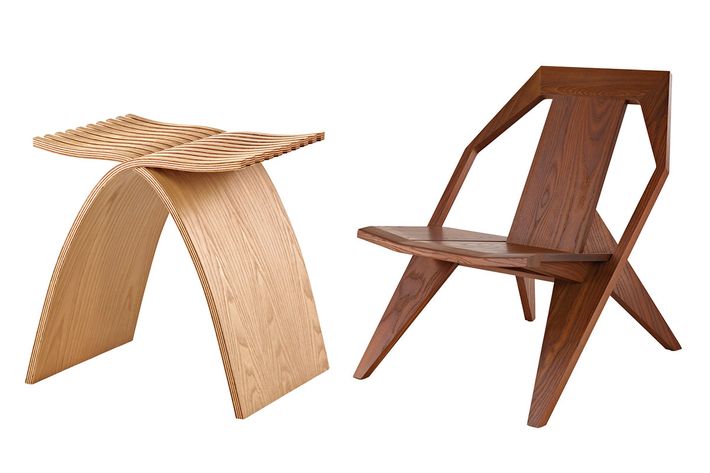 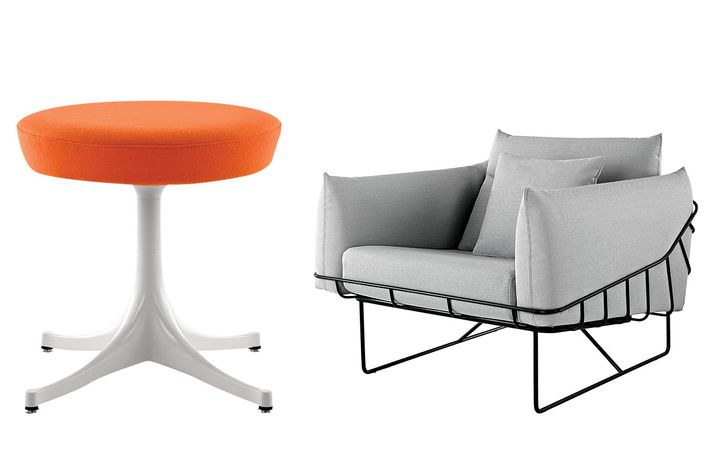 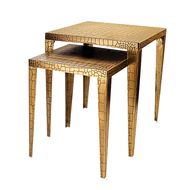 “Crocodile is our signature texture, and I like reimagining it on different materials. For these nested tables ($2,500), we etch the pattern onto brass by hand so it looks like it’s made out of one piece of crocodile.” 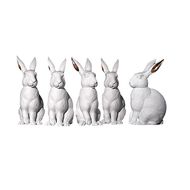 “My newest collection is all about games and magic. These porcelain bunnies ($295), the magician’s helper, are a nice, whimsical touch. I’d put one on a desk or line them all up on a bookshelf.” 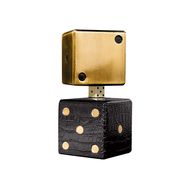 “The porcelain-and-brass dice ($250) look decorative, but they’re actually boxes. You can use them to store playing cards or just hide things in plain sight.”

“This tray ($1,250) is made from black-and-white shells inlaid onto a wood base in this straight-line pattern that’s the opposite of a shell’s naturally curvy shape. I love that contrast.” 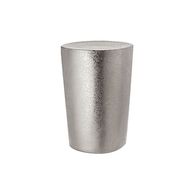 “People think this silver stool ($950) is platinum, but it’s made out of porcelain. It’s a refined version of a garden stool that’s also waterproof. I like to keep one in my steam shower.”

Considering Drake and Bieber’s latest hits, how do you feel about Jamaican music’s mainstream moment?
Reggae and dancehall have always had a huge, somewhat unsung influence on everything from rap to dance music. It goes far beyond Bob Marley, and now that’s starting to get recognized. The thing is, that kind of music isn’t really being pressed on vinyl anymore. I have a record label called DKR where we reissue old reggae music like Al Campbell’s Collie Herb/World Crisis ($12), plus over the past decade I’ve collected rarities like a silk-screen-cover Revival Dub Roots Now LP from the legendary Channel One label ($75). You’ll find music here you can’t listen to on your iPhone.

October
Target
255 Greenwich St.
The first Manhattan “flexible format” concept — about a quarter of the size of a typical Target — also has a Chobani café.

A/D/O
29 Norman Ave., Greenpoint
A design-focused shop and co-working space in the former home of the Brooklyn Bazaar.

*This article appears in the August 22, 2016 issue of New York Magazine.

life after roe 12 mins ago
9 Women on Getting an Abortion in the End Days of Roe “It felt like an insult to have to read that my fetus is the size of corn.”
uvalde 10:00 a.m.
‘Who Are the Bad Guys?’ It’s the question my children asked. My answer: the moral cowards who slobber and grovel over money from the gun lobby.
By Kathryn Jezer-Morton
action item 9:30 a.m.
How to Help the Uvalde Community From supporting Robb Elementary School families to pressing for gun-control legislation.

sports! 8:00 a.m.
This Advice from Elite Runners Will Inspire Even Non-Runners Running advice for your entire life.
style 8:00 a.m.
Hey Fashion Friend: I Need Summer Sandals That Won’t Give Me Blisters Hopefully these 18 pairs won’t destroy your feet.
By Emilia Petrarca
books 8:00 a.m.
The Sad Young Literary Man Is Now a Middle-Aged Dad Keith Gessen wrote a memoir about family life. His wife, Emily Gould, is mostly okay with that.
By Elizabeth Weil
what we know Yesterday at 6:40 p.m.
Gunman Kills at Least 19 Children and Two Teachers at Texas Elementary School The deadliest massacre of its kind since Sandy Hook.
gone sale-ing Yesterday at 5:28 p.m.
Here’s My Designer-Sunglasses Shopping Secret I never pay full price.
lawsuits Yesterday at 5:18 p.m.
Kate Moss Says Johnny Depp Never Pushed Her Down a Staircase Testifying in Heard v. Depp, the model denied the rumor.
uvalde Yesterday at 4:47 p.m.
The Children Are No Longer Our Future So now what?
By Brittney Cooper
i tried it Yesterday at 4:00 p.m.
Okay, Fine, Journaling Kind of Works After years of carrying around an empty notebook, I finally forced myself to write down my weirdest, dumbest thoughts.
texas school shooting Yesterday at 2:10 p.m.
Beto O’Rourke Confronts Greg Abbott Over Shooting: ‘This Is on You!’ The Democratic candidate for governor interrupted a press conference about the elementary-school shooting before he was pulled away by security.
texas school shooting Yesterday at 1:18 p.m.
‘We Can’t Get Numb to This’ Basketball coach Steve Kerr expressed how many are feeling after the Texas elementary-school shooting: exhausted and angry.
your next move Yesterday at 1:00 p.m.
‘How Can I Convince My New Boss That I’m Ready to Be a Manager?’ The arrival of a new boss means having a clean slate at work, especially if they’re an external candidate. So position yourself as an asset to them.
survivors Yesterday at 1:00 p.m.
Stop Forcing Me to Endure the Horror of Depp v. Heard The defamation trial against Amber Heard by Johnny Depp has turned abuse into online entertainment. For survivors, it’s shattering.
do i need this? Yesterday at 12:28 p.m.
Do I Need the First-Ever Uniqlo x Marni Collaboration? How to get the drop tomorrow, May 26.
self Yesterday at 12:00 p.m.
It Took Me 18 Years to Eat Three Meals a Day The comedian and star of E!’s Welcome Home Nikki Glaser? on finally overcoming a lifetime of eating disorders.
what we know Yesterday at 11:29 a.m.
These Are the Names of the Uvalde School-Shooting Victims At least 19 kids and two teachers are dead after a gunman opened fire on a Texas elementary school.
galas Yesterday at 9:24 a.m.
The PEN America Literary Gala Had Something to Say About Book Burning Margaret Atwood tried to burn a copy of The Handmaid’s Tale.
love and tiktok Yesterday at 8:00 a.m.
The Free Dating Coach That’s Already on Your Phone TikTok. It’s TikTok.
More Stories