The Baby Godfather meme is several years old at this point, but it still cracks me up: a toddler in a too-big tuxedo, chubby face drooping into a frown, pointing his little hand down like he’s condemning someone to sleep with the fishes. Or like he’s the actual Godfather in the opening scene of the first movie, explaining to a trembling visitor how favors work: “Someday, and that day may never come, I’ll call upon you to do a service for me,” says Don Corleone/this baby. “But until that day, consider this justice a gift on my daughter’s wedding day.”

Which, besides the whole murderous-mobster thing, is not so far off. As Christian Jarrett reported today at BPS Research Digest, a study recently published in the journal Developmental Psychology found that, by the time they reach age 3, kids are already like mini Godfathers: They keep running tallies of all the people in their debt, and they know how to adjust their behavior toward each person accordingly. 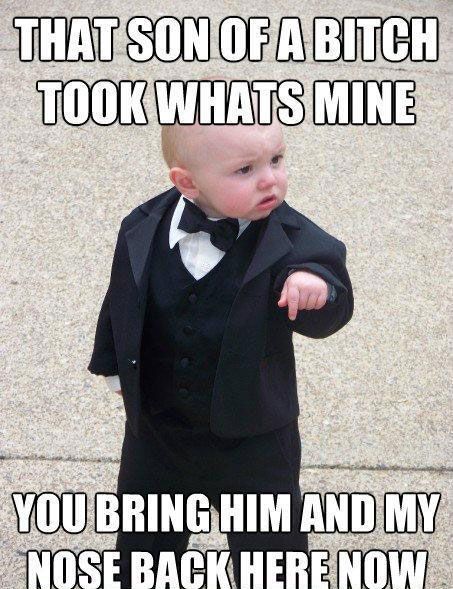 Author Markus Paulus, a developmental psychologist at Ludwig-Maximilians-University of Munich, set up a three-round experiment for his study subjects, all preschoolers between the ages of 3 and 5. In the first round, each kid was given a set of stickers, plopped in a room with two stuffed animals, and told they could choose how many stickers to share with their new inanimate pals. In the second, Markus revealed that the animals also had their own equal-sized sticker collections, demonstrating for the kids that neither was actually needier than the other.

Finally, he surrounded the same two stuffed animals with toys, and told the kids they could ask one of the animals to share. Across all ages, they tended to approach whichever animal they’d previously shared their stickers with — suggesting, Markus argued, that they were collecting a favor they believed they were owed. “This study provides first evidence that preschool children possess reciprocity expectations,” he wrote, “and points thus to the strategic nature of early social behavior.”

As Jarrett noted, this new study is “just the latest to show preschoolers’ sophisticated psychological awareness. For example, by age four, they also know when you’re contradicting yourself and 5-year-olds can see through your bravado,” he wrote. “In short, you might think you can run circles round a preschooler, but watch out, they’ve probably got you sussed.” And if one of them happens to make you an offer you can’t refuse, know that they expect to one day be repaid in kind.

Like Tiny Godfathers, Toddlers Keep Track of Who Owes Them