Love at First Kiss on TLC. Photo: Courtesy of TLC

From Naked Attraction to Sex Box to Dating Naked, reality TV continues to find increasingly nightmarish ways to get people to fall in “love” in front of a national audience. The newest attempt: Love at First Kiss, a TLC dating show from the creators of The Bachelor. A micro-budget sociology experiment with zero aesthetic appeal, Love at First Kiss has neither the fairy-tale schmaltz of The Bachelor nor the kink factor of the naked shows. Rather, this bold new frontier in televised romance combines the clinical sterility of an all-white room with the sexual dynamics of a high-school dance. Sound titillating? Let’s dig in!

The gimmick: The show opens on an all-white room: THE KISS ROOM. In this romantic windowless void, two strangers (all heterosexual so far) lock lips, prompting reactions ranging from meh to ew to oh god please make it stop. After that, they can choose to go on a two-minute speed date on a more furnished area of the soundstage, or they can choose to rudely stand the other person up. If the speed date goes well, the kissers can then choose to go on A REAL DATE, either to the beach, or to the park, or to a different park. This show’s budget is $25.

The contestants: The women on the first episode all seem normal-ish, apart from the fact they think they might leave the show with a boyfriend and not an ugly flare-up of herpes 1. There’s a Kansan Realtor who looks like Kristin Davis and doesn’t normally kiss until the third date (such a Charlotte thing to say!), and Jaeda, a 20-year-old dance coach looking for a “best friend.” “I’m hoping this is the day, we just click instantly, and fall in love the first time we see each other,” she says hopefully. The men are, without question, terrible. There’s a man who dresses like Andre on The League, a guy who keeps comparing his partner to a glazed doughnut, and a mustachioed guy who terrifyingly declares: “I make weird choices. Who rocks a mustache like this? Only somebody a little weird!” Then there is our tragic hero, Josh, who is 27 and has never been kissed.

Actually, I take back what I said about this show being bad. Somehow, these producers found the white whale of reality-TV programming: a 27-year-old kiss virgin. “I really want to fall in love, like what if she’s the one?” says Josh, before expressing hope that “his little friend stays down” during the smooch.

The love connection: Love at First Kiss operates on the same premise as The Bachelor, which is that love is an inexplicable and mysterious force, founded on vague buzzwords like “chemistry” and “connection” and “spark” instead of the arduous work of forcing emotional compatibility between two difficult and contradictory human beings. The opening teases successful pairings: “I could see going toward marriage and kids and building a life together,” we hear one guy say. “I found my love at first kiss,” fawns another. Throughout the episode, I can’t stop thinking about The Lobster, a film about a dystopian world in which singles have a month to try and mate before being turned into animals. What if Love at First Kiss takes place in a parallel universe, where kissing in this white box is literally their only choice at survival? This is my best explanation for the existence of this show.

Is it worth your investment?: The only way I would watch this show was if it were a recurring segment on The Late Late Show With James Corden in which various celebrities make out with Helen Mirren. That said, I am very much rooting for kiss-virgin Josh, who deserves, if not love, at least a stint on Bachelor in Paradise. 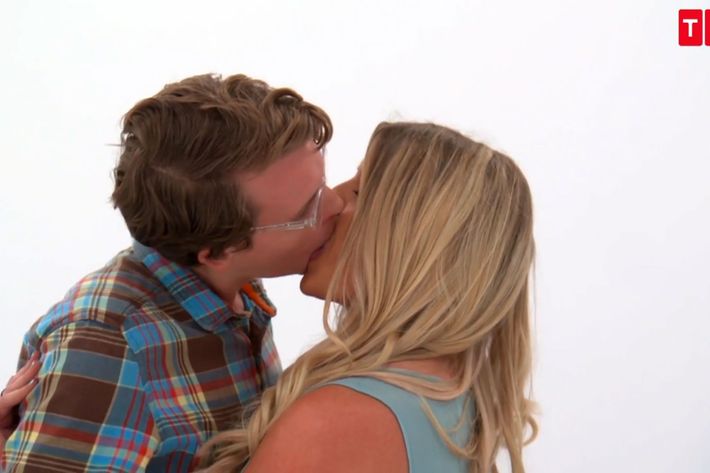 Love at First Kiss Is the Worst Dating Show Yet