As it’s gotten less and less acceptable for people to express explicitly racist beliefs and opinions, many researchers have turned their attention to so-called implicit bias, or the subtle, often unconscious ways people respond to people of different races (or gender, or anything else that’s quickly visible). A lot of implicit bias comes down to how we process faces. After all, we’re evolved to form quick, gut-level impressions of faces, to determine, as accurately as possible, whether someone might wish us harm or might help us. And sometimes these gut-level impressions can feed into prejudice.

The problem is that we’re not sure exactly how to “fix” implicit bias. Some researchers think that making people aware of it can help, but beyond that social science has, for understandable reasons given the subject’s complexity, done a lot more to explore the problem than to propose straightforward solutions.

One intriguing possibility is that our responses to the faces of so-called outgroup members is partly set at childhood. Last week, at the American Psychological Association’s convention in Denver, Jasmin Cloutier, a psychologist at the University of Chicago, presented some intriguing early research suggesting that early-childhood exposure to diverse faces causes people to be less susceptible to certain sorts of implicit bias.

Specifically, Cloutier discussed a 2014 paper in the Journal of Cognitive Neuroscience he co-authored with Tianyi Li, also of the University of Chicago, and Joshua Correll of the University of Colorado Boulder. For the study, Cloutier and his colleagues had 45 white participants come into a lab and perform a task in which they were exposed to a series of black and white faces. Using brain-scanning technology, the experimenters measured amygdala activity among the participants — that is, activity in the part of the brain that is known to be central to fear and other emotions — as they were exposed to a series of both novel and familiar (from earlier in the experiment) faces. After the experiment, participants were asked a bunch of questions, including how much exposure to different races they’d had in their childhoods.

Here, via a slide from Cloutier’s presentation, is how much amygdala activity was recorded for participants who self-reported low, medium, and high levels of exposure to diversity as children: 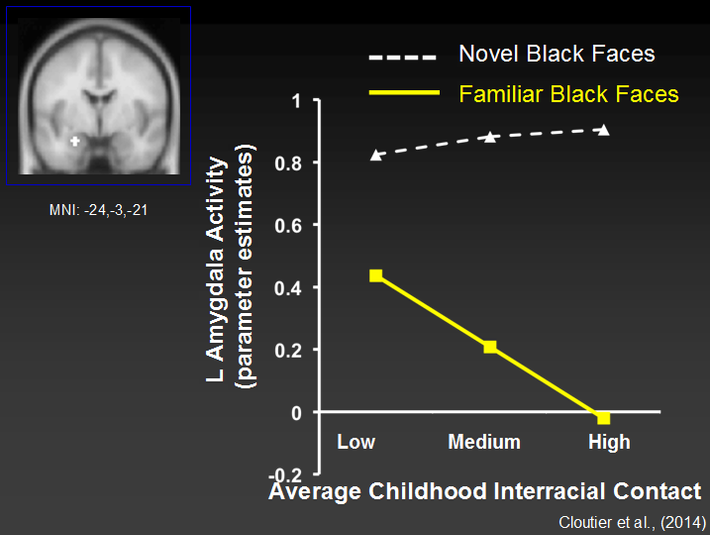 So for novel black faces, there was, statistically speaking, the same amount of amygdala activity regardless of childhood exposure to diversity. But for black faces that were made familiar during the task, whites who had exposure to childhood diversity had far less of an amygdala response, which the researchers take as a possible sign that the exposure make their brains better equipped, after that initial period of uncertainty, to process black faces as individuals rather than simply black people. (I asked Cloutier via email if there was a chance that there was some sort of response bias here, that the sorts of people who were less likely to have an amygdala response to a black face were also the sort of people who might say they’d had more childhood exposure to diversity, but he said that he and his colleagues “attempted to control for other measures like ‘motivation to control prejudice’ and explicit measures of racial bias, which I believe minimize this concern.”)

“The process of considering others as individuals rather than as members of a social group (i.e. Black), may explain the decreased amygdala activity to familiar black faces in perceivers with more exposure to people from different races,” Cloutier told me in an email. And as he and his colleagues explain in their paper, this process of “perceptual individuation … has long been considered critical for reducing prejudice.” “Alternatively,” he said in his email, “this effect could be the downstream result of the greater face processing ability of perceivers who are exposed to a greater variety of faces. Individuals who are better at processing faces may not need to recruit the extended neural face processing networks to the same extent when they encounter a perceptually familiar faces.”

All of which suggests — but by no means proves, given how early this sort of research is — that exposure to a wide variety of faces at a young age could have important effects when it comes to how adults process faces, particularly the faces of members of “outgroups” that tend to be victimized by discrimination.

Now, researchers are just starting to figure all this stuff out, so you can’t over-extrapolate from one study. But Cloutier is set to publish more research on this: For instance, during his talk he mentioned that he has an article in press at the journal Cerebral Cortex in which he and his colleagues found that, to steal from one of his slides, “Increased childhood interracial exposure associated with decreased activity in a large network of brain areas.” That would suggest, again, that childhood interracial exposure might make our brains more adept at processing different sorts of faces and individuating them — and perhaps less likely for subtle fear-responses to kick in when we see someone as a member of a group rather than a person.

If all this research bears out, it will suggest that diversity might have certain self-reinforcing aspects not just at the psychological level — if you grow up with a lot of different sorts of people, both intuition and research suggests you’d be less likely to discriminate against the groups in question — but at the neurological level, too. Which wouldn’t be too surprising: Given how deep an impact our early-life experiences have, why should exposure to diversity be any exception?

What Does Diversity Do to Kids’ Brains?