Plus: Excellent collections from Altuzarra, Proenza, and Herrera. 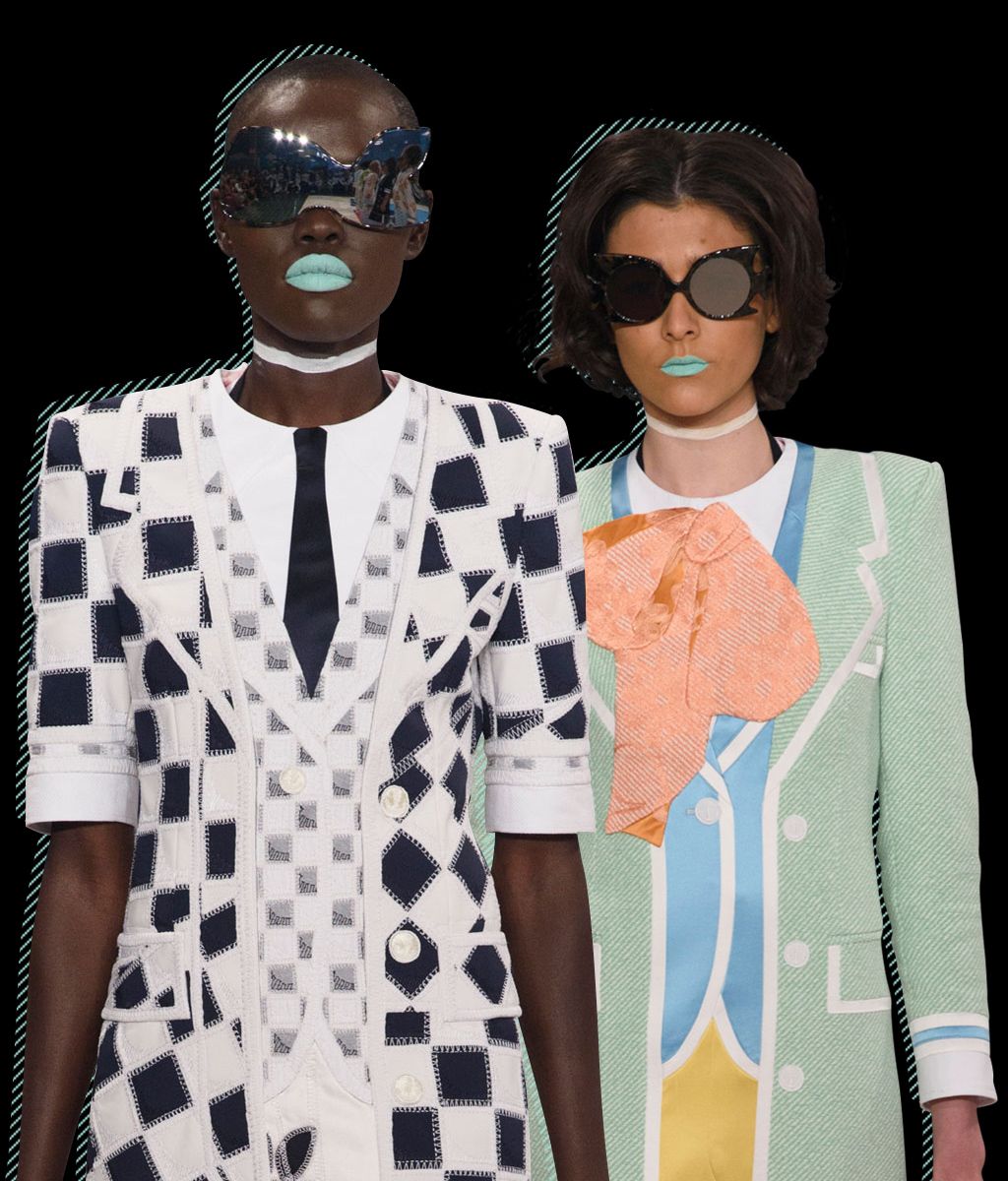 The photographer Slim Aarons once described his ideal subject as “attractive people doing attractive things in attractive places.” That meant socialites like C. Z. Guest and Babe Paley relaxing in Palm Beach or the Bahamas, wearing clothes that were understated and always their own. Recalling a picture called Poolside Gossip, taken in 1970 at the Kaufmann House in Palm Springs, its owner at the time, Nelda Linsk, said that Aarons told her to just “pull something out of your closet.”

Fashion designers and art directors have cribbed from Aarons’s images for years, because they document a vanished world to which he had unfettered access. Perhaps his most iconic image is of Guest in a white playsuit holding the hand of her small son by the family’s pool in Palm Beach, a set of columns in the background. On Monday, Thom Browne re-created that scene — or, rather, he created a blue-tiled rectangle on the floor of a basement in Chelsea, complete with columns. Finding a pool with the grandeur of Guest’s would have been impossible — but it’s not even the point. Forget the pool. It’s the image that matters — where Aarons’s pool scene looked three-dimensional, Browne’s looked virtually flat, as if based on a digitalized version of the original photo.

That’s a nifty way to comment on how we view stuff today, and also on our ability to manipulate things digitally, like an image of a Vermeer that gets turned into a perky abstract pattern for a dumb blouse. But Browne took the idea a lot further: He rendered the clothes flat, too. He did this by a laborious process called intarsia, in which pieces of fabric are assembled much like a puzzle for a smooth, seamless effect. And he produced every garment as a trompe l’oeil version of a ’60s-era ladies’ luncheon suit, in checks, or as a shift with a white collar or jaunty bow. There was even a dress in sheared fur with a trompe l’oeil sweater tied at the waist and Browne’s label visible at the back, where the neck of the “sweater” turned down.

Fashion Is More Political Than Ever, But What Is It Saying?
Triumphant Alexander Wang’s Red Hot American Summer

Browne’s clothes, however ingenious, have a tendency to look stiff and ultimately unattractive. But, in linens and cottons, these clothes looked easy and light. They were also just fun — steeped in those watery blues and pinks we’ve come to associate with the optimism of Aarons’s world, and shown with Browne’s offbeat accessories, including sunglasses and platform heels in the shape of whales and sunfish, and new gingham and print versions of his Hector dog bag. (The British milliner Stephen Jones also crafted, from tiny mirrors, a bowwow hat that sparkled like a disco ball on the model’s head. Could someone please wear that to next year’s Oscars?)

The shows of the past day or so marked a shift at NYFW — away from the porno-sportivo and dubiously political, and toward clothes that looked charming and friendly, guided by a flattering silhouette. That was the story at Proenza Schouler, where Jack McCollough and Lazaro Hernandez pretty much stuck to the same line — a floaty, asymmetrically hemmed skirt and a slightly raised waist. Typically the skirts were pleated, Miyake-style, and done in a bold stripe (say, black and cobalt), while the top part might be a crisply tailored blazer in striped jacquard or just an off-the-shoulder shell. Color-blocked knits suggested Mondrian or, on second glance, a French couturier’s take on Maasai decoration.

Whatever the inspiration, the key fact of this show is that McCollough and Hernandez didn’t go off in a new direction. Instead, they dug into some of the styles they’ve explored over the past few years — the tribal fringe and knits, for example, from a year ago. The lack of an unmistakable brand identity has been their shortcoming, as the retail pros Ronald Frasch and Rose Marie Bravo have been telling them. So this collection represents the refinement of many of their ideas, often in lighter-weight materials, and that’s real progress.

Joseph Altuzarra also had a terrific show, in part because it built so clearly on the past few seasons — the slim, sexy skirts, the French dose of Bardot-esque gingham (now in blazers or cropped pants with a red lace ruffle, and also in a filmy shirtdress), the lean silhouette. I might have served up less fruit — small cherries, lemons, pineapples as embroideries or prints on python — but I also appreciate that Altuzarra has built his reputation on unexpected decoration. Another thing to notice about this collection is the breezy (and fresh) mix of patterns, like gingham with a vivid French tulip print. That’s happening a lot this season, and Altuzarra does it with confidence.

At Oscar de la Renta, the studio staff took a collective bow, while Laura Kim and Fernando Garcia, who replaced Peter Copping, sat in the front row next to Annette de la Renta, the designer’s widow. The workmanlike show of white cotton lace dresses, gold-hued paisley pieces, and modest evening looks basically returned the label to neutral so that Kim and Garcia can now take over and do their magic.

The Monse designers, virtually unknown a year ago, are having a big effect on the industry: Witness the number of editors wearing shirts spilling off their shoulders or tied in funny ways, a style they favor. The couple also worked briefly for Carolina Herrera, who is celebrating her 35th year in fashion. She now has the capable hands of Raffaele Ilardo, her head of design, who worked with de la Renta and as the chief tailor at Dior. That’s a lot of talent to sprinkle on some spring clothes — and it showed. Herrera’s simple dresses and tops in cotton with hobo-sack ties at the shoulders were among the best things she has done in a while, as were the casual knits, and a trio of would-be bride dresses as the closer.

crime 5:58 p.m.
A Mother Pushing a Stroller Was Shot and Killed in Manhattan Investigators say 20-year-old Azsia Johnson was shot at “very close range” while on the Upper East Side Wednesday night.
5 questions with... 4:43 p.m.
Saucy Santana on the Formula for Going Viral Santana makes viral videos in one take. He does so by staying true to himself.
the body politic 4:00 p.m.
The Abortion Stories We Didn’t Tell How decades of silence left us unprepared for the post-Roe fight.
By Rebecca Traister
pride 2:00 p.m.
‘I’m Trying to Focus on the Joy’ Celebrating 20 years of Pride in St. Petersburg amid Florida’s anti-LGBTQ+ crusade.
By Ashley Dye
that's hot 1:19 p.m.
Paris Hilton Has Her Priorities Straight No president is more important than Britney, bitch.
trendspotting 1:00 p.m.
The Bride Who Didn’t Care Meet the too-cool-for-tradition aesthetic.
By Laura Pitcher
power 12:40 p.m.
Ketanji Brown Jackson Is Officially a Supreme Court Justice She was sworn in on Thursday, becoming the first Black woman to ever serve on the bench.
celebrity 12:40 p.m.
The Investigation Into Meghan Markle Bullying Claims Is Over The findings will not be made public.
life after roe 12:00 p.m.
What Makes People Change Their Minds About Abortion? Pro-choice evolutions can take years, a timeline that feels painfully slow in this post-Roe moment.
life after roe 11:40 a.m.
The Uphill Battle to Codify Roe v. Wade President Biden has called on Congress to make an exception to the filibuster rule so it can reinstate federal abortion protections.
my two cents 8:00 a.m.
How to Find a Financial Adviser And how to know if you really need one.
By Charlotte Cowles
life after roe Yesterday at 5:30 p.m.
Some Hospitals Have Already Stopped Providing Plan B A health system in Missouri says it has stopped providing emergency contraception until the state’s abortion ban is “better defined.”
don't call it a comeback Yesterday at 5:14 p.m.
Cameron Diaz Is Coming Out of Retirement With a little help from Tom Brady.
crime Yesterday at 3:23 p.m.
R. Kelly Has Been Sentenced to 30 Years in Prison “The public has to be protected from behaviors like this,” a judge told the singer.
in sickness and in health Yesterday at 2:40 p.m.
Travis Barker Has Been Hospitalized He’s reportedly being treated for pancreatitis after a recent colonoscopy.
celebrity Yesterday at 2:14 p.m.
Lauren Conrad Reveals She Had an Ectopic Pregnancy “I wanted to share my own experience with lifesaving reproductive care.”
abortion Yesterday at 1:25 p.m.
Meghan Markle Calls On Men to Be Vocal About the End of Roe In a new conversation with Vogue, she spoke about the devastating impact of the SCOTUS ruling.
shopping Yesterday at 1:17 p.m.
What to Expect From the Nordstrom Anniversary Sale Deals incoming.
skin kare Yesterday at 1:08 p.m.
Kim Kardashian Is Being Sued Over SKKN A Black-owned beauty brand filed a suit alleging copyright infringement.
wedding etiquette Yesterday at 1:00 p.m.
The Bride and Groom Formally Request That You Dress Up The tyranny of wedding dress codes.
By Kayleen Schaefer
More Stories