One of the most deflating findings within social science over the past couple years is that social science itself is embroiled in a replication crisis. Lots of the all-star, big-time, TED talk–y findings are having trouble being re-found by other researchers, from the machinations of self-control to the success-bestowing capacity of “grit” to the power of posing.

The crisis is a reminder that Science isn’t some monolithic, unitary entity etching Truth into any number of fancy academic journals, but rather a professional field that actual humans go into and attempt to make a living in. In a new paper for Royal Society Open Science, University of California, Merced, cognitive scientist Paul Smaldino and Max Planck evolutionary ecologist Richard McElreath contend that it is academia’s cultural and economic structures that create the incentives whereby well-meaning researchers produce work with shoddy research methods and statistical procedures.

“My impression is that, to some extent, the combination of studying very complex systems with a dearth of formal mathematical theory creates good conditions for low reproducibility,” Smaldino told the Guardian. “This doesn’t require anyone to actively game the system or violate any ethical standards. Competition for limited resources — in this case jobs and funding — will do all the work.”

It’s a form of natural selection, they say: When professional fitness is defined by the number of publications that you rack up, it means that researchers and their labs will be given to optimizing for publishing broadly rather than researching deeply, and the methods that lead researchers to career success will spread through “progeny” in the form of graduate students in their labs or through other labs copycatting their successes, not unlike America’s college football coaches collectively falling in love with the spread offense.

“We term this process the natural selection of bad science to indicate that it requires no conscious strategizing nor cheating on the part of researchers,” Smaldino and McElreath write. “An incentive structure that rewards publication quantity will, in the absence of countervailing forces, select for methods that produce the greatest number of publishable results. This, in turn, will lead to the natural selection of poor methods and increasingly high false discovery rates.”

The authors do some fancy statistical work themselves, the most damning of which regards statistical power, or whether a given experiment has enough participants to not spit out false positives. Though the low levels of statistical power in social science has been called out since 1962, it hasn’t much improved. Putting together a 60-year meta-analysis, Smaldino and McElreath find that “statistical power shows no sign of increase over six decades,” as illustrated by the chart below. 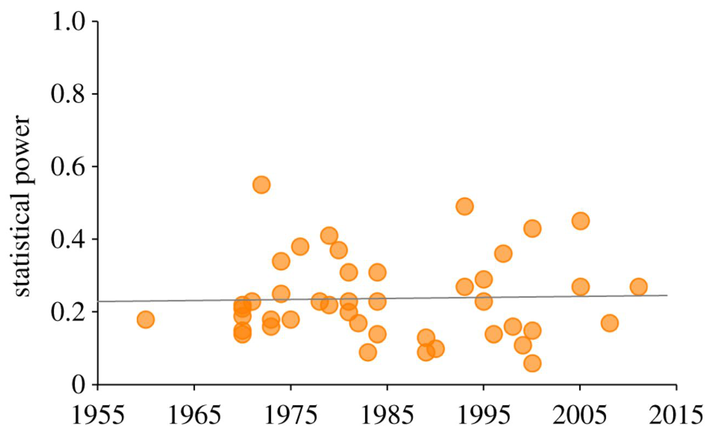 The principal at work here may be Campbell’s Law, named for Donald Campbell, one of the 20th century’s most influential psychologists. In a 1976 paper, he observed that:

The more any quantitative social indicator is used for social decision-making, the more subject it will be to corruption pressures and the more apt it will be to distort and corrupt the social processes it is intended to monitor.

It’s important to note that in this case, it’s not the sense of “corrupt” like politicians taking bribes, but altering from its original intent or power, like a file on your computer getting corrupted. Campbell’s Law is a super-helpful tool for understanding why the world’s gone nuts, from the entrenchment of high-stakes standardized testing in education to clickbait journalism content to statistic-padding police work. Scientists, teachers, reporters, and cops are all humans, and they all respond to the structures of their environments, for better or worse, and an extreme emphasis on the quantitative can come at the cost of the qualitative. When the tail of the metric wags the dog of practice, bad things ensue.

Are Academics Unconsciously Set Up for Clickbait Research?

wtf 1:38 p.m.
Bryce Dallas Howard Confirms Huge Pay Disparity on Jurassic World “I was paid so much less than the reports even said.”
celebrity 12:46 p.m.
Adele Says She ‘Might As Well Be Married’ to Rich Paul “I’m not engaged. I just love high-end jewelry, boy!”
cut covers 12:08 p.m.
Amandla, Amandla, Amandla The Bodies Bodies Bodies star is the Cut’s July-August 2022 cover star.
By the Cut
gross! 11:56 a.m.
Who Told the GOP About ‘BDE’? A gubernatorial candidate claims Ron DeSantis has it. Of course he doesn’t.
obits 10:04 a.m.
Anne Heche Has Died at 53 The actor suffered severe injuries after a car crash in L.A. earlier this month.
flying high 10:00 a.m.
The Ultimate Celebrity Perk? Climate Disaster. The Twitter account @celebjets gives us insight into Kylie Jenner’s 17-minute flights.
power 10:00 a.m.
Everything to Know About the WNBA Star in Russian Custody Amid ongoing prisoner-swap negotiations between the U.S. and Russia, Brittney Griner’s legal team has appealed her conviction.
garment district 8:00 a.m.
How to Be a Fashion Designer: Sewing Not Required Oluwole Olosunde’s curriculum offers a wide-ranging crash course on the fundamentals of building a brand in the Instagram era.
how i get it done 7:00 a.m.
How Kerry Washington Gets It Done “I’m not good at compartmentalizing and only bringing part of myself into a room.”
By Faith Cummings
astrology Yesterday at 8:30 p.m.
Madame Clairevoyant: Horoscopes for the Week of August 15 As Mars enters mercurial Gemini, you may find yourself easily distracted. Fighting it will only make it worse.
By Claire Comstock-Gay
sex diaries Yesterday at 8:00 p.m.
The Artist Who’s Not Sure She Loves Her Comedian Boyfriend This week’s sex diary.
r. kelly Yesterday at 5:47 p.m.
R. Kelly Denies One of His Alleged Victims Is Pregnant With His Child After identifying herself as the singer’s fiancée, Joycelyn Savage claimed she’s pregnant with his child.
rip Yesterday at 3:51 p.m.
Freya the Walrus Was Too Good for This World The summer icon has been euthanized by Norwegian officials.
rust Yesterday at 1:40 p.m.
Everything We Know About the Rust Shooting An FBI report concludes that the trigger must have been pulled.
shopping Aug. 12, 2022
The $6 Brow Product That Changed My Eyebrows It took me almost a decade to find the perfect brow product.
fashion Aug. 12, 2022
Julia Fox Is Back! And she is giving us the latex looks we’ve been so thirsty for.
feminism Aug. 12, 2022
Who Actually Lost the Sex Wars? And were there any winners? A conversation with Christine Emba, Nona Willis-Aronowitz, and Lorna Bracewell.
friday sales Aug. 12, 2022
19 Things on Sale You’ll Actually Want to Buy: From Ninja to Isabel Marant Including the most effective foot peel and some Chuck 70’s for just $35.
i'd buy that Aug. 12, 2022
Drop Everything, Joan Didion’s Estate Sale Is Coming How much would you pay for a mohair throw that once graced her couch?
do i need this? Aug. 12, 2022
Do I Need Lori Harvey’s Gym Outfit? I couldn’t get with Pilates, but this I can do.
More Stories