Fashion Is More Political Than Ever, But What Is It Saying?

Muddled statements at Opening Ceremony and Hood by Air. 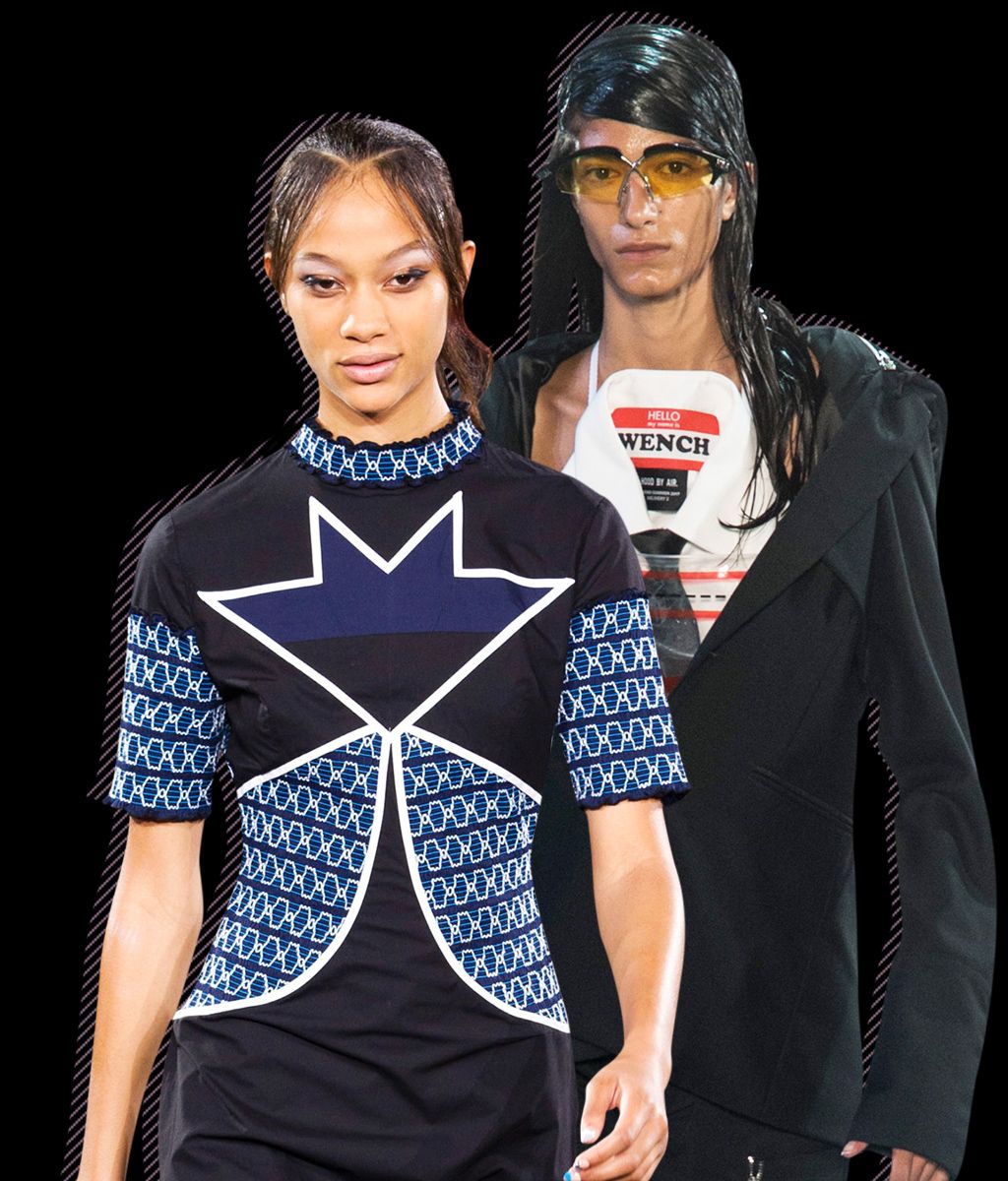 In a sense, fashion has always been political. Rising hemlines came with the Nineteenth Amendment. Chanel’s cardigan jacket was a form of liberation, no matter how chic it looked. In the ‘90s, Gaultier famously made statements about diversity, sex, and the freedom to love whom you wanted. Think of Hamnett’s stop-the-nukes T-shirts, or Westwood’s anti-Thatcher rants. There has been no shortage of fashion activism, and some of it has been quite acute.

The difference today is that while there is more political commentary in fashion than ever before, the intent of it — sincere, or commercial, or a strange mix of both — is harder to discern. The boundaries (such as they are) keep erupting, and not just in the sense that designers can’t even decide if it’s summer or fall. The PornHub hats at the Hood by Air show on Sunday were done in collaboration with the sex site, but they also could be read as a bid to cash in on the obsession with fan merchandise — just as the word wench, in fat letters on a shirt at HBA, could be taken either as a provocation or as a way for Hood’s founder, Shayne Oliver, to promote the name of his new side gig with the musical artist Arca.

Now, when Shayne Oliver says he’s going to dissect something, he means it. One of the many, many things I liked about this show was how the cut of, say, a jumpsuit related to contemporary bodies and, more, to the self-involvement of a person imagining himself (or herself) peeling off the top half of the garment in order to seduce someone online. You feel — or I did — that the zippered jumpsuits were designed with an awareness of people used to looking at themselves in mirrors, or in selfies, and then seeking approval from a stranger on a screen. In case you missed the point, a male model in a red cheerleader skirt and a long, black quilted coat appeared on the runway staring at his cell phone.

In this tense election season, a “Pageant of the People” — the amusing title of the Opening Ceremony show, at the Jacob Javits Convention Center — seemed a natural. What’s more, the impresarios Carol Lim and Humberto Leon invited a host of stars, including Fred Armisen and Carrie Brownstein, who functioned as emcees, and Ali Wong, Rashida Jones, Whoopi Goldberg, and Sarah McBride, a LGBTQ-rights activist who spoke at the Democratic National Convention.

But despite the best efforts of Armisen and Brownstein to engage the fashion crowd, mostly with jokes about the robotic models, the event — and, perhaps, the motives — felt shallow. There was conspicuously no mention of either candidate. In between speakers, who addressed matters like immigration reform and the importance of voting (as if this audience needed to be reminded), the models traipsed out in anodyne clothes that had little or no relationship to the political message. Reading later in the show notes that the designs — knit dresses, patchwork denim, and so forth — “celebrate the American immigrant” didn’t change a thing. But you could “shop the show” right after, on openingceremony.com.

Pyer Moss, the label by the talented Kerby Jean-Raymond, also made a political statement — in essence, about our money culture. The theme was a little belabored, in part because the references were to Bernie Madoff (with his image appearing as photo prints on shirts). But I’m a believer in Jean-Raymond’s fashion skills and his nearly immaculate sense of irreverence — pitch perfect in a black wool lace top with the word greed spelled out in orange block letters, as if transported from a wholesome varsity jacket.

Fashion Is More Political Than Ever, What Is It Saying?

uvalde 1 min ago
‘Who Are the Bad Guys?’ It’s the question my children asked. My answer: the moral cowards who slobber and grovel over money from the gun lobby.
By Kathryn Jezer-Morton
action item 9:30 a.m.
How to Help the Uvalde Community From supporting Robb Elementary School families to pressing for gun-control legislation.
sports! 8:00 a.m.
This Advice from Elite Runners Will Inspire Even Non-Runners Running advice for your entire life.

style 8:00 a.m.
Hey Fashion Friend: I Need Summer Sandals That Won’t Give Me Blisters Hopefully these 18 pairs won’t destroy your feet.
By Emilia Petrarca
books 8:00 a.m.
The Sad Young Literary Man Is Now a Middle-Aged Dad Keith Gessen wrote a memoir about family life. His wife, Emily Gould, is mostly okay with that.
By Elizabeth Weil
what we know Yesterday at 6:40 p.m.
Gunman Kills at Least 19 Children and Two Teachers at Texas Elementary School The deadliest massacre of its kind since Sandy Hook.
gone sale-ing Yesterday at 5:28 p.m.
Here’s My Designer-Sunglasses Shopping Secret I never pay full price.
lawsuits Yesterday at 5:18 p.m.
Kate Moss Says Johnny Depp Never Pushed Her Down a Staircase Testifying in Heard v. Depp, the model denied the rumor.
uvalde Yesterday at 4:47 p.m.
The Children Are No Longer Our Future So now what?
By Brittney Cooper
i tried it Yesterday at 4:00 p.m.
Okay, Fine, Journaling Kind of Works After years of carrying around an empty notebook, I finally forced myself to write down my weirdest, dumbest thoughts.
texas school shooting Yesterday at 2:10 p.m.
Beto O’Rourke Confronts Greg Abbott Over Shooting: ‘This Is on You!’ The Democratic candidate for governor interrupted a press conference about the elementary-school shooting before he was pulled away by security.
texas school shooting Yesterday at 1:18 p.m.
‘We Can’t Get Numb to This’ Basketball coach Steve Kerr expressed how many are feeling after the Texas elementary-school shooting: exhausted and angry.
your next move Yesterday at 1:00 p.m.
‘How Can I Convince My New Boss That I’m Ready to Be a Manager?’ The arrival of a new boss means having a clean slate at work, especially if they’re an external candidate. So position yourself as an asset to them.
survivors Yesterday at 1:00 p.m.
Stop Forcing Me to Endure the Horror of Depp v. Heard The defamation trial against Amber Heard by Johnny Depp has turned abuse into online entertainment. For survivors, it’s shattering.
do i need this? Yesterday at 12:28 p.m.
Do I Need the First-Ever Uniqlo x Marni Collaboration? How to get the drop tomorrow, May 26.
self Yesterday at 12:00 p.m.
It Took Me 18 Years to Eat Three Meals a Day The comedian and star of E!’s Welcome Home Nikki Glaser? on finally overcoming a lifetime of eating disorders.
what we know Yesterday at 11:29 a.m.
These Are the Names of the Uvalde School-Shooting Victims At least 19 kids and two teachers are dead after a gunman opened fire on a Texas elementary school.
galas Yesterday at 9:24 a.m.
The PEN America Literary Gala Had Something to Say About Book Burning Margaret Atwood tried to burn a copy of The Handmaid’s Tale.
love and tiktok Yesterday at 8:00 a.m.
The Free Dating Coach That’s Already on Your Phone TikTok. It’s TikTok.
sorry May 24, 2022
Walmart Is Reevaluating Their Juneteenth Ice Cream The retail giant also rolled out emancipation-themed wine bottles, commemorative T-shirts, and party supplies.
More Stories