While Monse makes fashion that pops on the screen and the body. 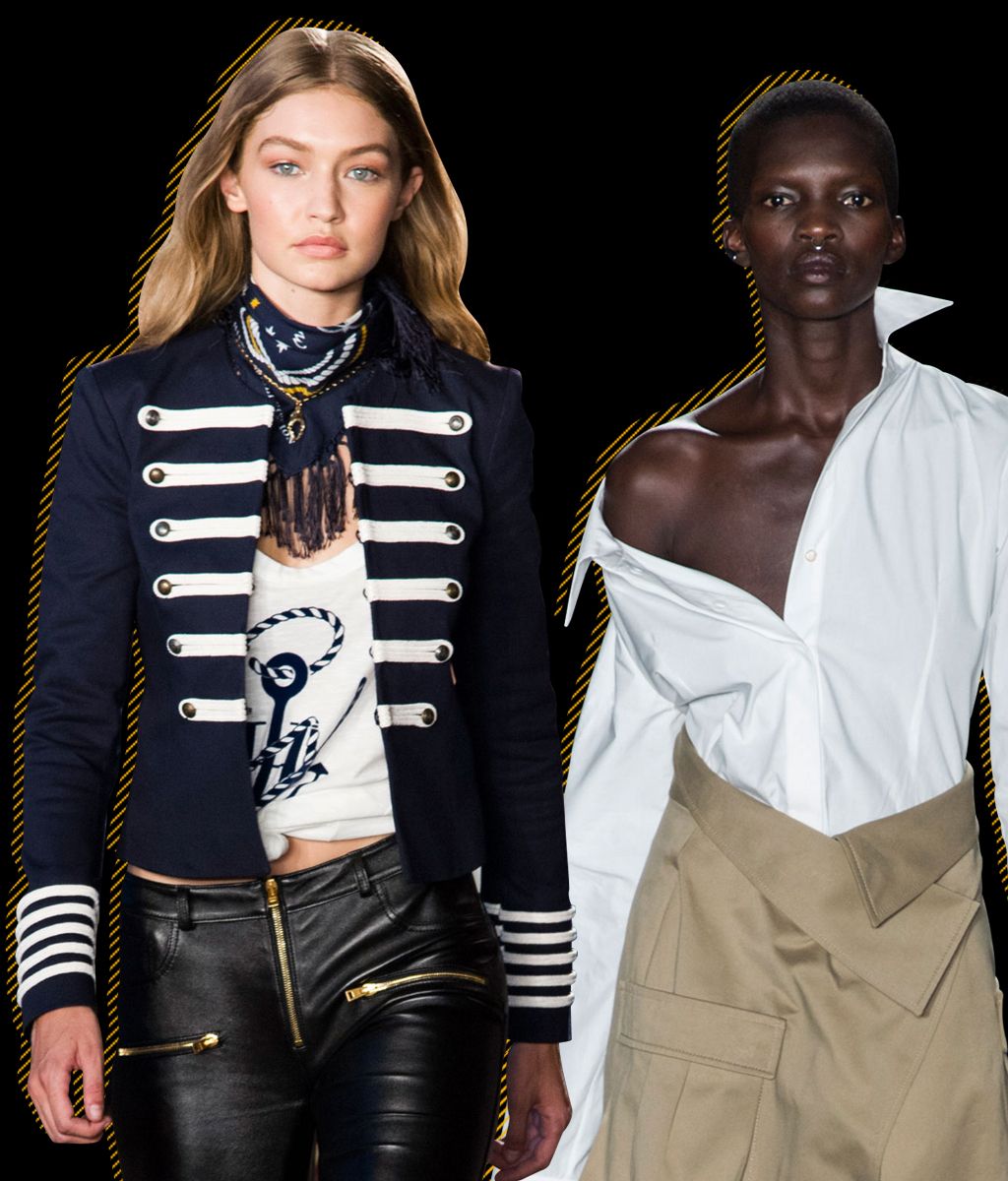 Everyone knows that Instagram has changed how people view fashion. You could even say that it has produced a divide in the fashion world — between designers with a refined sense of taste and cutting, who know the subtle tricks of dressmaking, and those seeking a visual pop, with color or vivid graphics, who use young celebrities like heart pills. Tommy Hilfiger wants to be in the second group. In fact, for his fall 2016 collection — shown last night in a carnival setting, complete with rides and french fries, at the South Street Seaport — he teamed up with Gigi Hadid (22.6 million Instagram followers) to draw inspiration from her personal style. The most coveted looks will surely be the black leather jackets with her name, in Gothic letters, on the back.

Wheee! The Gigi Hadid Motorcycle Club — take me for a ride!

Seriously, though, the idea is not as dumb as it sounds. From its early days as a preppy shirtmaker, the Hilfiger brand has pretty much always followed the latest youth trend. Does it really matter if Gigi inspired the black over-the-knee socks worn with denim cutoffs, or the big, sloppy varsity sweaters? They looked great — better than his stuff has looked in a while. Gigi basically supplied the brand with a framework around which to focus some classic American looks, something muses have been doing for decades. (Think of Loulou de la Falaise and Saint Laurent, or Carine Roitfeld and Tom Ford.) Gigi’s Instagram base also doesn’t hurt.

What struck me most about the Monse show, also Friday, was that it uniquely combined both qualities — that is, the designs have savoir faire and they would also pop on a cell-phone screen. That’s a rare combo; too often the sizzling shows lack real design value. But Monse’s creators, Laura Kim and Fernando Garcia, are young enough to appreciate that we are an image-glutted culture, and experienced enough, as protégés of the late Oscar de la Renta, to make clothes that fulfill both missions.

They did this in a number of ways. The most obvious was in their use of bold menswear stripes and glam textures — mainly sequins in rich tones of copper, rose red, and jungle green. Often the color got an extra jolt by being mixed with a pristine white element, like a shirt or a wide collar. Among the very best looks were sleeveless evening tops, in either sequins or silk charmeuse, with an asymmetrical flap collar. They sort of drizzled over the body and were shown with slouchy striped trousers that repeated the flap detail. Garcia and Kim also did some clever things with cutting, in particular their trousers — like a daytime pair that convincingly combined gray pinstripe and khaki with cargo pockets. And there were some terrific scarf-print dresses that seemed to spill over the body.

But the real achievement in this collection (Monse’s third) is that Kim and Garcia brought more control to their deshabille style, and they did it in the construction of the garments. You can see it in the slightly molded waists and bodices of the dresses, in the silhouette of a trench coat. There’s a lot more traditional form than in previous collections, and yet the loose, sexy attitude that has defined Monse — and quickly made it a hot label — hasn’t been lost. Next season, Garcia and Kim will return to Oscar de la Renta as co-creative directors while continuing their own label. As proof of how skillful these designers are, they will probably keep the style of the two brands quite separate. Oscar has its own identity, after all, and an incredible history to mine. But the Monse founders are also keenly aware of how Gigi’s generation “reads” fashion, and that will be to Oscar’s benefit, too.

Jeffrey Dodd and Jason Wu also had strong collections, if on a more modest scale. Dodd’s best looks were a tailored jacket and coat in either white or a faded denim-blue canvas, with frayed edges, and a lovely strapless cotton dress in a cloudy-blue print. He’s a good knitwear designer, and I wish this collection had included more. Knits, along with sheer fabrics, micro-pleating, and many asymmetrical hems, gave Wu’s show an appealing lightness — not to mention, a great silhouette.