James Pennebaker, a distinguished professor at the University of Texas, got married right out of college in the early ‘70s. Three years after his marriage, he and his wife started to question their relationship, and Pennebaker, confused and unsettled, sank into a depression. He ate less, drank more, and started smoking. Embarrassed by what he saw as emotional weakness, he became more and more isolated.

One morning about a month into this decline, Pennebaker climbed out of bed and sat down at a typewriter. He stared at the machine for a moment, then started writing freely and frankly about his marriage, his parents, his sexuality, his career, and even death.

As he wrote, and continued to write in the days that followed, something fascinating happened. His depression lifted and he felt liberated. He began to reconnect with his deep love for his wife. But the writing had an even farther-reaching impact. For the first time, he started to see the purpose and possibilities in his life.

To Get Happier, Focus on What Makes You Miserable
People With High ‘Emotional Granularity’ Are Better at Being Sad

Pennebaker’s own experience getting through this rocky period sparked 40 years of research about the links between writing and emotional processing. Over and over again Pennebaker did studies in which he divided people into two groups and asked some to write about emotionally significant experiences, and the others to write about common things: their shoes, or maybe the cars passing on the street. Both groups wrote for the same span—about 20-minutes a day, three days in a row.

In Pennebaker’s experiments, some participants wrote about sexual abuse by once-trusted family members; some about catastrophic failures; others about the devastating losses of their deepest relationships through breakups, illness, and death. One woman described unfathomable guilt stemming from an incident that had happened when she was 10. She’d left a toy on the floor on which her grandmother had slipped and fallen, ultimately leading to the grandmother’s death. Another man wrote about a warm summery night when he was nine years old. His father had taken him outside and calmly announced that having children had been the biggest mistake of his life, and that he was leaving.

In each study, Pennebaker found that the people who wrote about emotionally charged episodes experienced marked improvement in their physical and mental well-being. They were happier, less depressed and less anxious. In the months after the writing sessions, they had lower blood pressure, improved immune function, and fewer visits to the doctor. They also reported better relationships, improved memory, and more success at work.

When I first discovered Pennebaker’s research, I was struck by the way it echoed my own teenage experience journaling about my father’s cancer. While my father was dying, and then when he was gone, my life was painfully different, and the writing helped me voice my regret about all the time I hadn’t spent with him and the all the things I hadn’t said. I also wrote about the moments I didn’t regret, and how I’d given what I could. Through that writing, I learned to sit with all of my emotions, both the pleasant and unpleasant ones. This, in turn, gave me insight into myself, the most important revelation being, “I am resilient.” I realized that I can live with my full self, even the parts I’m not so thrilled about.

Still, I was skeptical of Pennebaker’s results, which seemed too good to be true. How could writing for just 20 minutes a day for three days have such a positive and lasting effect on people’s lives? I kept Pennebaker’s research tagged in my notebooks: then, many years later when I was doing my Ph.D. on emotions I had a chance dinner with him. This meeting led to much animated discussion, after which I took a deeper dive into his work. 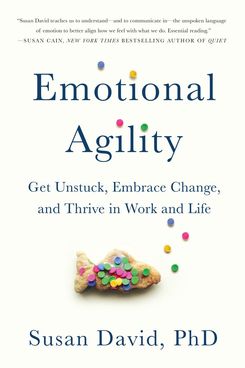 I read about an intervention Pennebaker had conducted at a Dallas computer company that laid off one hundred senior engineers. Most of these were men over 50 who’d worked at the company since college. This was the only work life they knew, and getting pushed out had left them panicked and confused. They faced the real likelihood of never working in their field again. After four months, not one of them had found a new job.

Pennebaker and his team wondered if writing about their experiences could help the ‘downsized’ engineers. Eager to try anything that might help their employment prospects, the engineers agreed to participate. Pennebaker had one group of engineers write about being laid-off. They delved into their feelings of humiliation, rejection and outrage; the related strains on their health, marriages and finances and their deep worries about the future. Two control groups either wrote about time management or didn’t write at all.

Before the writing began, there were no differences between the groups in terms of motivation, or in the effort they were making to land a new job. But afterward, the degree of change between them was astonishing. Just months after the emotionally charged writing sessions, the men who had delved into how they truly felt were three times more likely to have been reemployed compared with those who had not. Not only did the writing help the men process their experiences, it helped them step out from their despondent inertia and into meaningful action.

After many more studies, with many thousands of participants — children and the elderly, students and professionals, healthy and ill — we can say with confidence that showing up and applying words to emotions is a tremendously helpful way to deal with stress, anxiety, and loss. (For people who don’t like putting pen to paper or fingers to keyboard, there is nothing magical about the act of writing. Talking into a voice recorder, for example, can deliver the same results.)

But after showing up, there’s another critical aspect of agility: Stepping out. Deeper analysis over the years shows that unlike brooders or bottlers, or those who let it all hang out in big venting rants, the writers who thrived the most began to develop insight, using phrases such as “I have learned,” “It struck me that,” “the reason that,” “I now realize,” and “I understand.” In the process of writing, they were able to create the distance between the thinker and the thought, the feeler and the feeling, that allowed them to gain a new perspective, unhook, and move forward.

Make no mistake: these people had not found a way to enjoy being betrayed, lost, jobless, or critically ill. But by dissolving the entanglement that had built up between their impulses and their actions to see their experience in context, and from a broader perspective, they flourished despite it all. More often than you might expect, they found ways of turning these obstacles into opportunities to connect more directly with their deepest values.

Set a timer for 20 minutes. Open up your notebook (or begin a document on your computer). When the timer starts, begin writing about your emotional experiences from the past week, month and year. Don’t worry about punctuation, sloppiness or coherence. Simply go wherever your mind takes you, curiously and without judgment. Write just for yourself, and not for some eventual reader. Do this for a few days. Then, close the document without saving it, or throw the paper away. Or stick it in a bottle and cast it out to sea. Or if you’re ready, start a blog or find a literary agent.

It doesn’t matter. The point is that those thoughts are now out of you and on the page. You have begun the process of ‘stepping out’ from your experience to gain perspective on it.

How to Write Your Way Out of an Emotional Funk

fashion 12 mins ago
This Is How You Make a Red-Carpet Debut as a Couple Jonah Hill and his girlfriend, Sarah Brady, wore matching blue suits to the Don’t Look Up premiere.
auto-refill 10:13 a.m.
The Beauty Products This Longtime Editor Uses to the Last Drop A $10 hair spray pushes Leah Wyar’s visits to the colorist from five weeks to three months.
By Daise Bedolla
#metoo 9:45 a.m.
What We Know About the Disappearance of Peng Shuai After accusing a top Chinese government official of sexual assault, the tennis star’s whereabouts have become the source of international concern.
gift guides 9:00 a.m.
The Best Holiday Gifts to Buy This Year Thoughtful ideas that everyone on your list will love.
By the Cut
boss babies 8:00 a.m.
Kendall Roy’s Assistant Just Wants to Save Him Succession star Juliana Canfield is the woman behind the trainwreck.
advent calendar 2021 8:00 a.m.
Gift of the Day: An Otherworldly Eyeshadow Palette An extraterrestrial color cosmetics created by Byredo’s Ben Gorham and makeup artist Isamaya Ffrench.
how i get it done 7:00 a.m.
How the President of Net-a-Porter Gets It Done Alison Loehnis wants to bring people joy with fashion and style.
By Andrew Nguyen
astrology Yesterday at 8:30 p.m.
Madame Clairevoyant: Horoscopes for the Week of December 6 Eclipse season may be behind us, but we’re still feeling its effects.
By Claire Comstock-Gay
sex diaries Yesterday at 8:00 p.m.
The Yoga Teacher Who Finally Sleeps With Her Ex’s Friend This week’s sex diary.
meme alert Yesterday at 6:02 p.m.
We Will Never Know Peace The Chris Pratt casting memes will never stop.
meats Yesterday at 5:00 p.m.
Why Is the Food in Succession So Gross? Meats. So many meats.
keeping up with the royals Yesterday at 3:46 p.m.
Even Princesses Need Linens Princess Mako does what any New Yorker would do: shop at Bed, Bath & Beyond.
news Yesterday at 12:59 p.m.
Chris Cuomo Is Out — For Good CNN officially fired Chris Cuomo amid an internal investigation, saying “new information has come to light.”
advent calendar 2021 Yesterday at 8:00 a.m.
Gift of the Day: A Nail Polish That’s Ugly in a Good Way Meet your new favorite neutral.
advent calendar 2021 Dec. 4, 2021
Gift of the Day: Louis Vuitton’s Logo Hoop Earrings What’s a jewelry collection without the perfect hoops?
art basel Dec. 4, 2021
10 Minutes in Miami With Kehinde Wiley The artist on his “surprising” influences, favorite works, and the NFTs that took over Art Basel this year.
school shootings Dec. 3, 2021
A 15-Year-Old Reportedly Opened Fire at a Michigan High School A suspect has been charged as an adult in the shooting and death of four students.
parties! Dec. 3, 2021
The Bestest Party Looks of the Week Hi, Machine Gun Kelly!
westward ho Dec. 3, 2021
Playing The Oregon Trail Made Me a Murderino All those settlers dying violent deaths on their way west? So good.
friday sales Dec. 3, 2021
18 Things on Sale You’ll Actually Want to Buy: From Everlane to Sephora Including our favorite brightening eye cream and an Eberjey-esque cotton pajama set.
More Stories