The world is a big place. It has nearly 7,000 recorded languages. According to an impressively large-scale study in the Proceedings of the National Academy of Sciences, lots of the world’s tongues use similar sounds in their words for the same things. Covering the research for Scientific American, Anne Pycha notes a few prime examples: the R sound often shows up in words for red, like rojo in Spanish, rot in German, piros in Hungarian, kırmızı in Turkish, kura in Maori, and rouge in French. Similarly, people around the globe use a nasal n in referring to the schnoz: there’s nose in English, burun in Turkish, and hana in Japanese.

For over a century, linguists have been saying that the link between the sounds of words and their meanings is arbitrary. But this study, lead by University of Zurich linguist Damián Blasi, suggests that there’s more going on. Blasi and his team compared lists of common words from 4,298 languages around the world, unearthing similarities in the speech sounds in a range of different classes of words, from body parts to adjectives to pronouns to verbs to objects in nature. The analysis shows how “certain sounds are preferred or avoided in a large proportion of all words across continents and language families,” Blasi said in a statement, and “by people from very different cultural, historical and geographical contexts.”

The analysis looks like another example of the “bouba/kiki effect”: If you show the below image to kids or adults, they’ll reliable describe the spiky one on the left as “kiki” and the bulbous one on the right as “bouba.” 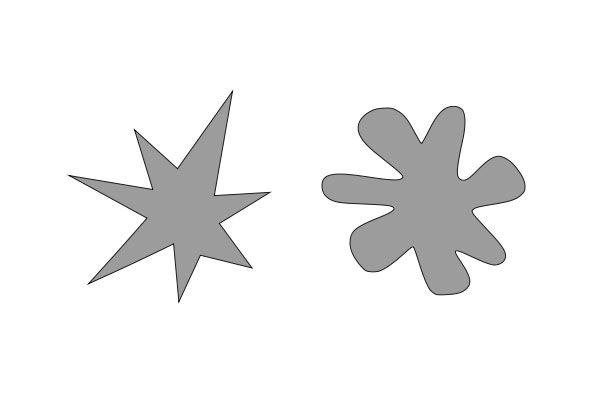 The sharp angles of the kiki shape match its sharp pronunciation, and the curves of the bouba match the oblong pronunciation of the word. In a separate, quantitative linguistics study that came out this year, researchers found that in the U.S., male names are likely to have harder “voiced” pronunciations (like Adam or Ian) while female names are softer and “unvoiced” (like Hope and Tina).

It looks like something of the same effect is going on here. The T sound was often used in words for stone, Blasi’s team found, and the S sound was often used in words for sand. Since stones are flat and hard to the touch, the T sound makes an intuitive, synesthetic sense; same with the slippery, loose, and sly nature of sandiness. While Blasi’s research here is not exhaustive, it certainly does give the impression that cultures around the world take in the world — and draw some of the same phonetic conclusions.

Languages Around the World Use Same Sounds for Same Things