A new report released by the left-leaning think tank the Economic Policy Institute revealed that the wage gap between black and white Americans was even greater in 2015 than it was in 1979.

Valerie Wilson, an author on the report and EPI’s program director on race, ethnicity, and the economy, told The Guardian, “The finding that stands out the most, our major result, is that the racial wage gaps were larger in 2015 than they were in 1979. That’s huge because the impression people have, in general, is we know there’s still racism in this country, but we think or at least believe that it’s getting better.” Here is the breakdown in 1979 versus the breakdown of the wage gap in 2015:

A week ago, the U.S. Census Bureau found that while overall, Americans wages are increasing, the gulf between the median annual income for a black family and that of a white family is still enormous: On average a black American family’s median income is $36,900, while a white American family’s is $63,000. The new census data also revealed that the gender wage gap overall hasn’t had a significant bump since 2007. 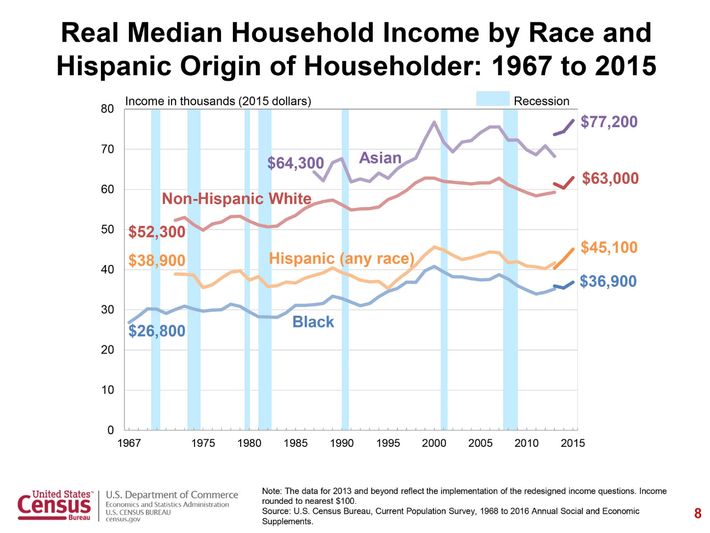 One reason for these continuing growing gaps are the wages men and women are paid right out of college. The report notes, “Black male college graduates (both those with just a college degree and those who have gone beyond college) newly entering the workforce started the 1980s with less than a 10 percent disadvantage relative to white college graduates,” it says, “but by 2014 similarly educated new entrants were at a roughly 18 percent deficit.” By the time black women and men enter the workforce, they’re already starting at a much lower rate than white Americans, which makes catching up years down the line almost impossible.

The Pay Gap Between Black and White Americans Is Still Bad