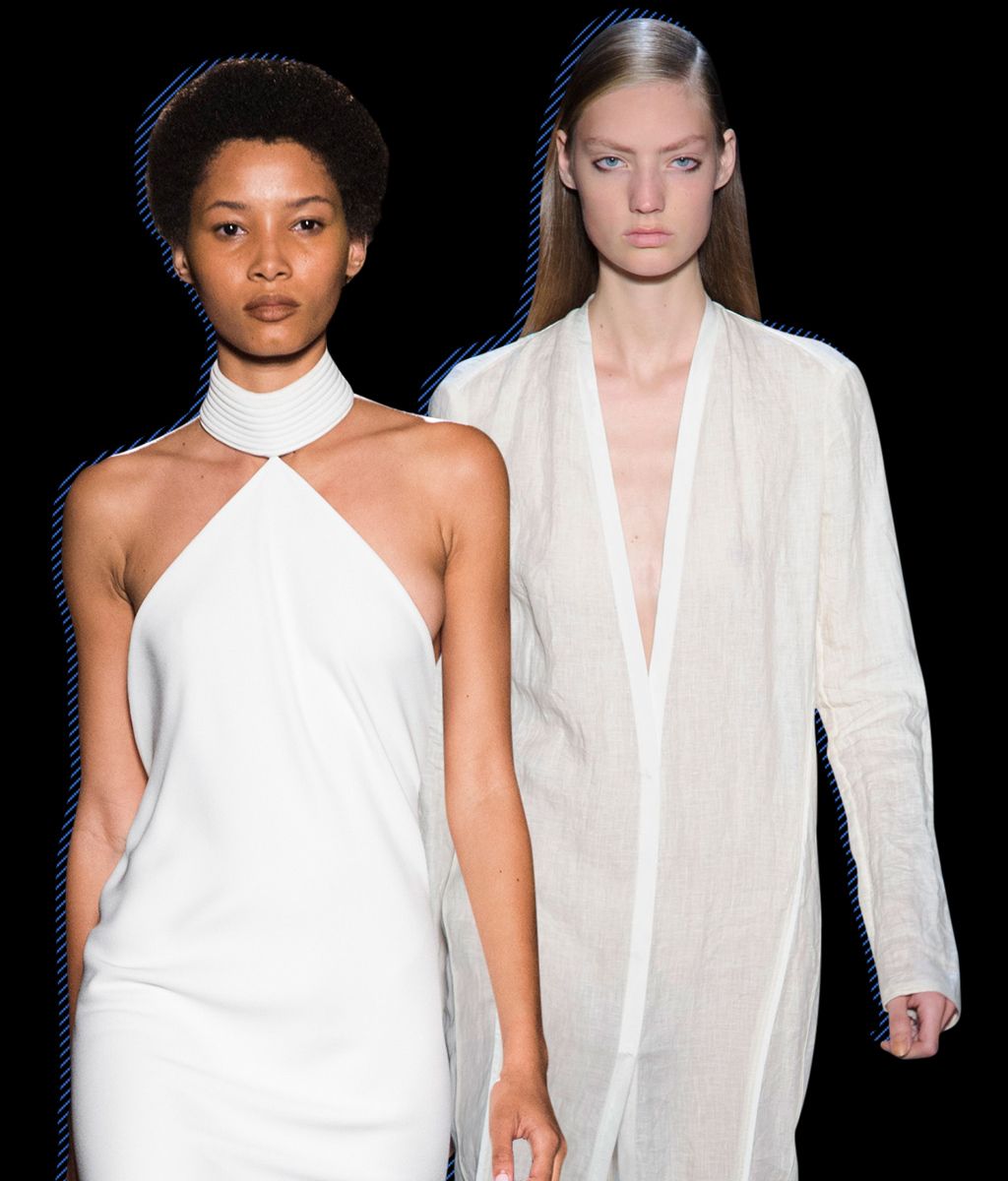 At some point, everybody in this city has a dream of “New York” — the glitter, the opening nights, the promise of a more glamorous life. And so, on Tuesday evening, we climbed the stairs to the gaudy heights of the Russian Tea Room. The photographer Steven Klein, carrying his baby son Ace (and a bottle of formula in his hip pocket), was next to me. Lady Gaga and Naomi Campbell would soon be along. We’d come for the thrill of wunderkind Brandon Maxwell.

For the most part, he did not disappoint. Maxwell understands the value of performance and establishing a sense of intimacy with his audience. He packed the room, leaving just enough space for the models to move through in solid shades of black, beige, olive, and the palest pink. The clothes were dramatic, too: sleek trouser suits, strapless cocktail dresses with folded satin bodices, and halter gowns trailing yards of that lovely blush-pink silk.

Nonetheless, expertly made or not, the collection is missing something. There’s no mystery, no special understanding of cut or women’s bodies that makes the clothes all that different from the work of a host of designers, past and present. In a way, they depend on the drama around them for their appeal — and inevitably people get wise. Maxwell, who is still young and obviously talented, might want to temper the dream and get down to something more personal and demanding.

“I was thinking I wanted to take away the artifice of fashion,” said Sophie Theallet, explaining her decision to skip a show and instead do one-on-one presentations in her Garment District office. “I prefer to take the time to go back to what I learned in Paris.”

Actually, what Theallet knows is on her fingertips. She can access an idea so quickly, or so it seems — in the proportions of her clothes; in the harmony of the way she combines fabrics like washed linen with, say, a waxed raffia; and in her simple but seductive shapes. Her clothes reflect the slower way of working of her mentor, Azzedine Alaïa, but her style is her own. And you never quite know what to expect from Theallet. This season, a botanical drawing of a stamen became the basis of a print that, when enlarged and turned upside down, looked like a spear or a fleur-de-lis motif. She used it for the full skirt of a cotton dress that she hemmed with a wide band of dark-brown waxed raffia. It reappeared, in relief, on clingy knits, and in a small, more abstract version for a wonderful chiffon mini-dress flared with petticoats. Theallet also used zippers to great effect, setting them into a strip of raffia on a bias-cut, sleeveless, brown-and-ivory-striped linen dress, so that you could peel it open from the shoulder. Or not.

’70s-Socialite Style Goes Digital at Thom Browne
Fashion Is More Political Than Ever, But What Is It Saying?

She did something similar with a baggy, long-sleeve tunic that resembled a sweatshirt, except in lustrous black silk. Spilling irregularly over the model’s body, and caught by a black band of athletic knitting at the hem, it would be the envy of any hipster-celebrity designer.

“It’s beautiful because of the simplicity of the fabric,” Theallet shrugged.

Narciso Rodriguez performed a similar magic with his materials, and with his powerful grasp of minimalism he makes the Olsen sisters of The Row look like maximalists. His first model wore slim white trousers, a ribbed white undershirt, and a matching pair of suede flats that looked a lot like sneakers. A moment later, a model appeared in a straight white tunic of featherlight silk, cut like a roomy cardigan. A number of dresses in mercury and aluminum hues combined light and shine in wonderful ways, but my favorite thing was the silver line running down the front of an otherwise plain black coat — like a streak of light glimpsed in a crowded street at night, and then gone. 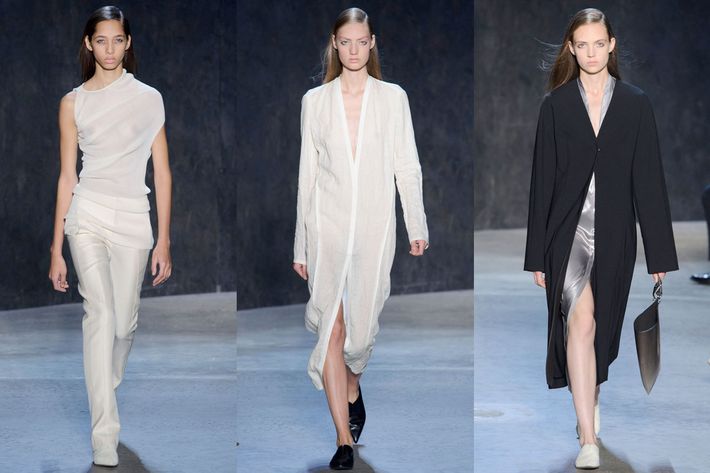 If Rodriguez needed only two or three items to make a look, the opposite could be said of Stuart Vevers at Coach. Each outfit in his pumped-up show — complete with rusted vintage cars that looked as if they’d been reclaimed from a demolition derby — had seven or eight components: sheer slip dresses, rose-printed leather tap pants, bandanas, denim. And that was in addition to the rivets and bottle caps on the leather jackets and bags. Still, the show was fun — a rockabilly mash-up for the merch-obsessed.

lawsuits 5:00 p.m.
Ellen Barkin Recalls Johnny Depp As ‘Jealous’ and ‘Controlling’ And more testimony from the Amber Heard v. Johnny Depp case.
father's day 4:10 p.m.
The Best Gifts for Dad (That Do Good, Too) One gadget provides clean drinking water to a child for an entire school year.
engagements 3:47 p.m.
AOC and Riley Roberts Are Engaged For once, some good political news.

power 3:24 p.m.
States Are Scrambling to Restrict Abortion Access With the Supreme Court expected to rewrite abortion rights, conservative states are advancing increasingly extreme bans.
are u coming? 2:45 p.m.
Rockin’ Out With the Mayor and ‘Late-Night Dorinda’ at the New Hard Rock Hotel Don’t expect Sid and Nancy; it’s pretty swanky.
law & order 2:07 p.m.
Would You Go to Anna Delvey for Legal Help? The infamous scammer is allegedly starting a law firm.
celebrity 2:02 p.m.
Rihanna Reportedly Had Her Baby According to TMZ, she gave birth to a baby boy.
obsessive tester 12:30 p.m.
19 Best Leave-in Conditioners for Hair That Just Can’t Anymore Softer, smoother, and shinier hair is just a spritz (or squirt) away.
By Erica Smith and Bianca Nieves
graduation (taylor's version) 12:24 p.m.
Who Said It: Taylor Swift or a Fortune Cookie? “Learn to live alongside cringe” and other wise advice from her NYU commencement speech.
style 11:36 a.m.
Hey Fashion Friend: Help! I’m About to Be So Sweaty There’s nothing wrong with sweating, but here are some tips for making it less uncomfortable.
celebrity 11:13 a.m.
Harry Styles Says Olivia Wilde Was ‘Very Helpful’ on Set He told Howard Stern he had “a wonderful experience” being directed by her in Don’t Worry Darling.
life after roe 11:00 a.m.
I, Too, Have a Human Form In Justice Alito’s draft opinion, the pregnant body is erased.
my two cents 10:00 a.m.
I Love My Teaching Job, But It Doesn’t Pay Me Enough Your options aren’t easy. But neither is squeaking by without enough money to do the things you want.
By Charlotte Cowles
motherhood 8:00 a.m.
A Model With a C-section Scar Is in the 2022 Sports Illustrated ‘Swimsuit’ Issue For the first time in the magazine’s 58-year history.
shopping Yesterday at 5:05 p.m.
14 Brands Getting Plus-Size Swimwear Right Here’s where to shop.
closings Yesterday at 4:51 p.m.
Bye-Bye, Bite Beauty After a decade in business, the brand is shutting down.
father's day Yesterday at 4:27 p.m.
The Cheapest, Nicest Gifts for Dads From the Most Expensive Brands Even the most hard-to-please parent can’t resist a Prada water bottle.
"size inclusivity" Yesterday at 3:40 p.m.
Victoria Beckham Says Wanting to Be Thin Is ‘Old-Fashioned’ Then why does her line only carry dresses up to size 14?
the most fertile man Yesterday at 3:38 p.m.
Nick Cannon Says He’s Considering a Vasectomy “I ain’t looking to populate the Earth completely.”
power Yesterday at 1:35 p.m.
Fans Are Spending Thousands to See the Depp v. Heard Trial Some traveled cross-country, camping outside the Virginia courthouse for the chance to be among the trial spectators.
More Stories