Here are some things that were happening a little over a hundred years ago: People were latching on to a medically dubious fad diet en masse. They were obsessed with their own poop. They were grappling with the most productive way to set up a workweek. They were feeling burned out by the busy state of their lives and seeking ways to disconnect and recharge.

Any of that sound familiar?

Point is, even things that feel especially Zeitgeist-y are rarely completely new — which is why, more than a century before New York ran a cover story on how technology-induced “distraction sickness” was hurting people’s ability to connect offline, the British magazine Punch printed a cartoon lamenting pretty much the same thing.

The cartoon, recently highlighted on the blog Public Domain Review, was published in 1906 as a prediction for the coming year: “These two figures are not communicating with each other,” the caption reads. “The lady is receiving an amatory message, and the gentleman some racing results.” 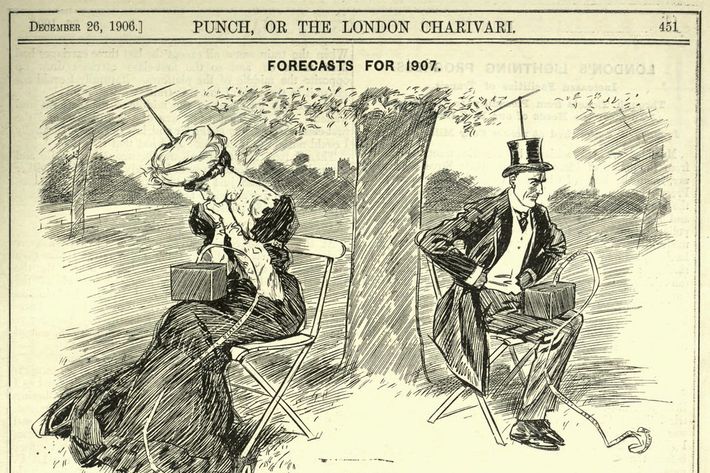 Look at this thing. Who has not been this couple at one point or another — one of you checking sports scores, the other texting someone more interesting? As the PDR post notes: “Replace these ‘wireless telegraphs’ with smartphones, update the dress a little, and this vision from a 1906 issue of Punch magazine could easily be for 110 years in the future.” (“Amatory message,” by the way, is basically an old-timey way to say sexting.)

It’s a fun little reminder that our modern worries aren’t so modern after all. As Oxford historian Melissa Dickson wrote on the Conversation a few months ago, technology has always been met with trepidation:

In the later decades of the 19th century it was thought that the telephone would induce deafness and that sulphurous vapours were asphyxiating passengers on the London Underground. These then-new advancements were replacing older still technologies that had themselves occasioned similar anxieties on their introduction. Plato, as his oral culture began to transition to a literary one, was gravely worried that writing itself would erode the memory.

And sometime in the future, when we’re all communicating with one another via little chips in our brains, there will be a handful of people silently lamenting the death of the spoken word. Silently, one partner takes in the game; another beams a message to someone out of sight.

ghislaine maxwell 10:34 a.m.
Would You Buy Ghislaine Maxwell’s Former Beach House? Proceeds from the seaside property will reportedly help fund her legal fees.
extremely online 10:00 a.m.
I Can’t Shut Up About ‘Goblin Mode’ It’s the perfect summation our post-pandemic selves: overwhelmed, underdressed, and depleted of all ability to act normal.
2022 fashion year in review 10:00 a.m.
It Was Julia Fox’s Year And Julia Fox’s year only.
power 8:16 a.m.
Brittney Griner Has Been Released From Russian Detention The WNBA star arrived back in the U.S. on Friday morning.
¡hola papi! 6:00 a.m.
‘Why Do I Always Have to Be the One to Initiate Plans?’ Most people are waiting for someone else to break through the quiet.
By J.P. Brammer
celebrity Yesterday at 9:06 p.m.
Toni Collette and Dave Galafassi Split After ‘Substantial’ Separation The two were married for almost 20 years and share two children.
celebrity Yesterday at 7:00 p.m.
Drew Barrymore Thinks Bad Dates Are ‘Awesome’ She may be the most optimistic single person on the planet.
keeping up with the royals Yesterday at 4:09 p.m.
Of Course Harry and Meghan Have Matching Penguin Suits Our king and queen of corniness.
always shopping Yesterday at 2:46 p.m.
16 Matching Sweatsuits You’ll Want to Live In All Winter Long Our favorites include ones you should especially wear outside of the house.
health Yesterday at 2:14 p.m.
Celine Dion Diagnosed With Rare Neurological Disorder In a video posted to Instagram, the singer said she was suffering from stiff-person syndrome.
where did you get that? Yesterday at 2:13 p.m.
Madison Utendahl on Nose Rings and Discounted Prada The entrepreneur shares her favorite NYC spots and her nightly routine.
grief Yesterday at 1:00 p.m.
My Dad’s Jeep When my father died, I got his car. Eight years later, it’s falling apart. How am I supposed to say good-bye again?
By Katie C. Reilly
royals Yesterday at 12:55 p.m.
Everything We Learned From Harry & Meghan Takeaways from their highly anticipated Netflix docuseries.
always shopping Yesterday at 11:52 a.m.
Give Yourself the Gift of an Earring Refresh This Holiday Season We found the earrings worth gifting.
holiday dressing Yesterday at 11:36 a.m.
Wearing an Opulent Outfit at Home Is the Superior Way to Spend New Year’s Eve What to wear while spending the holiday in the comfort of your own company.
drama Yesterday at 11:00 a.m.
Why Is Everyone Suddenly Talking About Something Navy? Social media is buzzing with rumors about influencer Arielle Charnas and her husband.
theranos Yesterday at 10:00 a.m.
Everything to Know About Sunny Balwani The former Theranos COO secretly dated Elizabeth Holmes for years. Now, he’s been sentenced to 13 years in prison.
my two cents Yesterday at 9:21 a.m.
‘How Do I Get Through the Holidays When I’m Already Broke?’ You can still enjoy yourself! You just need a plan.
By Charlotte Cowles
do i need this? Dec. 7, 2022
The One Thing You Need From the Uniqlo x Marni Collab The Cut Shop team tried out almost everything and reached a unanimous conclusion.
get it together Dec. 7, 2022
The 9 Best Rolling Luggage, According to Frequent Fliers Including one that’s under $200.
More Stories