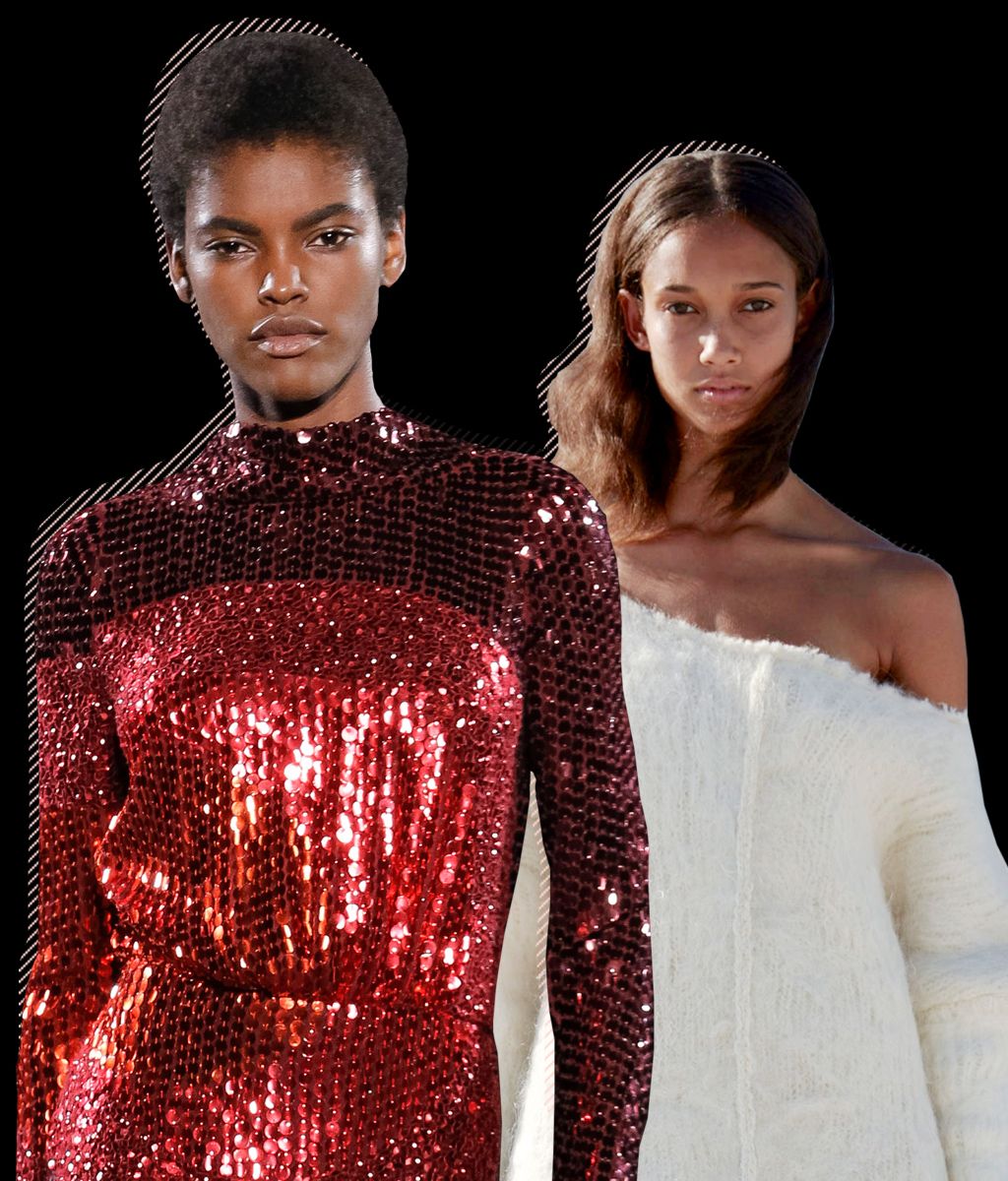 Shortly before 4 p.m. on Wednesday, Laura Brown, the recently appointed editor-in-chief of InStyle magazine, walked up to security guards at Kanye West’s Yeezy show on Roosevelt Island and told them that people (mostly journalists) would leave if the guards didn’t let them in soon. Eric Wilson, a former Times reporter who also works at InStyle, was threatened with arrest if he didn’t join other guests squeezed between a fence and a metal barricade. It was extremely hot, and most people in line, after traveling to the island on buses, had been waiting more than an hour to get in. Meanwhile, a stream of VIPs and hairdressers were shown through the gate.

Of course, neither an arrest nor a mass exit were likely to happen. In 30 years of covering shows, and encountering some hideous gate scenes (Claude Montana and Jean Paul Gaultier shows stand out, in particular), I’ve never seen a walkout. Because, as the British designer Katharine Hamnett once observed, perhaps before the birth of Kanye West, the whole point of fashion shows is being there. It isn’t for any artistic or utilitarian reason. It’s just to sit your ass down and feel blessedly in the mix of things.

Eventually, around 4:15, the guests were admitted to a plaza near the show space, where they crowded like livestock under some shade trees. Next to them, looking sinisterly beautiful, was the shell of the Smallpox Hospital.

Meanwhile, out of sight, on the wide lawn of the park site, dozens of models in beige, Spanx-like bodysuits were lining up, assuming the signature formation of West’s collaborator, the artist Vanessa Beecroft. By the time guests joined them, fanning to either side of the grass, where there was also a runway, one or two of the models had sat down. Soon, more joined them, and, near me, one girl crumpled in a near faint. Another model attended to her, but it was a while before someone, perhaps from the crew, came to the woman’s aid.

Whatever goodwill West earned from last season’s Yeezy spectacular at Madison Square Garden was slowly leaking out. This was not a man who cared about people — their well-being, or their time (four and a half hours expended on a single show). And maybe the scene at Yeezy is, along with the backdrop of an epidemic hospital, a parable for the industry — that nobody really gives a shit, so long as they make bank and sell some shoes and T-shirts. But I don’t know many people in the industry who actually think that way.

West’s problems didn’t end with the heat and the fainting models, or the grimaces of girls trying to soldier on in painful boots — some of which, in clear plastic, resembled supersize condoms. The clothes were boring. The parkas and ribbed minis and sweatshirts were Main Street versions of urbanwear, and nowhere near as provocative and inventive (or, God knows, funny) as what Hood by Air or Vetements (whom Kanye often cites as inspiration) can do. They were also a rather conventional male take on female sexiness and toughness. 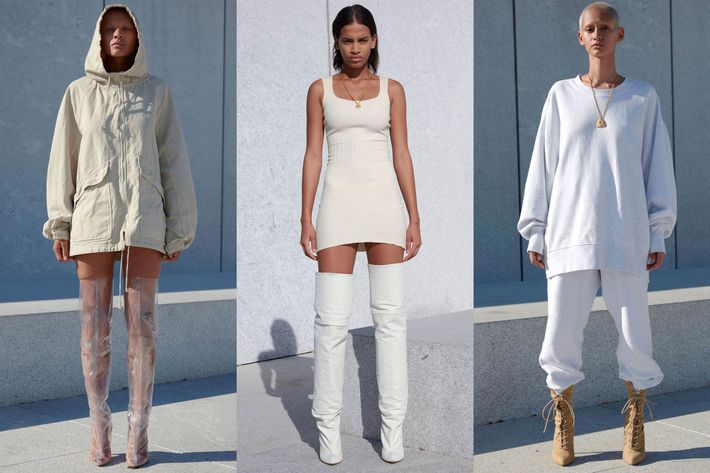 As I plotted my exit route, I thought there must be tons of young, smart, bold, nasty girls in this city who’d have a field day with these clothes, ripping, tearing, reimagining them — if only they cared enough.

Later, approaching Tom Ford’s dinner and show at the former Four Seasons Restaurant, on East 52nd Street, I saw the cameras of the paparazzi light up like firebugs under the canopy. I slipped into the marble foyer and up the stairs — freshly carpeted just for the evening — behind a man in an eye patch. In a moment I saw Jon Hamm, Cindy Crawford, Tom Hanks and Rita Wilson, Julianne Moore, Rachel Feinstein and John Currin, Sam Taylor-Johnson, and Graydon Carter, along with a number of retailers and journalists.

It wasn’t merely a familiar crowd that Ford had assembled to show his latest collection. It was a grown-up crowd, with grown-up ideas, grown-up values, and the grown-up realization that, yes, new ideas come along and the world moves on. Ford, who is also screening a new movie, Nocturnal Animals, this week, designed the clothes in his collection — tweed pencil skirts and crinkly leather jackets, shag coats, animal-print dresses, and long-sleeve velvet and sequined gowns — six months ago so they could be in stores today, when consumers see the first images. He is among the first designers to try the see-it-now, buy-it-now concept.

Many designers, including Ford, have profited creatively from working right up to the show deadline — trying a look, scrapping another. The process somehow stimulates their juices and often produces a great show. Some of that edginess was lacking last night, though I assume Ford can compensate by designing one-of-a-kind bombshells for the red carpet. In the main, I thought the clothes precisely addressed what a lot of sophisticated women like to wear.

In some respects, the most appealing show of the day was also the most modest — Rachel Comey’s presentation on Crosby Street. Chairs were set up on the sidewalk for guests, while the models — who represented the old, the young, the hip, and the nerdy — walked out in an array of casual looks that Comey, in her press notes, designated as “farmer’s market,” “for a burger,” “to pick up the kids,” and so on. For example, there were adorable denim overalls, a silk men’s shirt in a watery rainbow pattern, a white scoop-neck sweatshirt that was cut just right, and lots of easy cotton skirts designed by a woman who plainly knows what she’s doing. 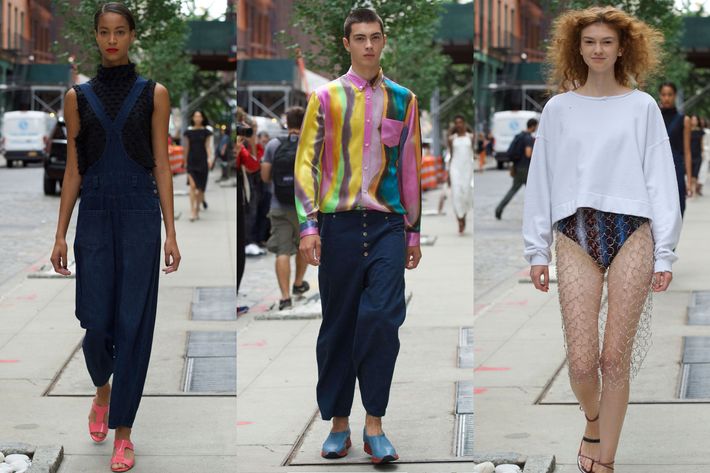 The show, like the clothes, was unpretentious. Comey told me that the collection marked 15 years since she presented her first show, two days before 9/11. “I didn’t know what a line sheet was, nor how to price a shirt,” she said, adding that she only knew that it felt good to dress up people in clothes that made them “feel nervous and energized.” Surely they want that still.