The designer transmuted bikinis and boxer shorts into affordable classics. Plus: accessible luxury from Co and a crossroads at Eckhaus Latta. 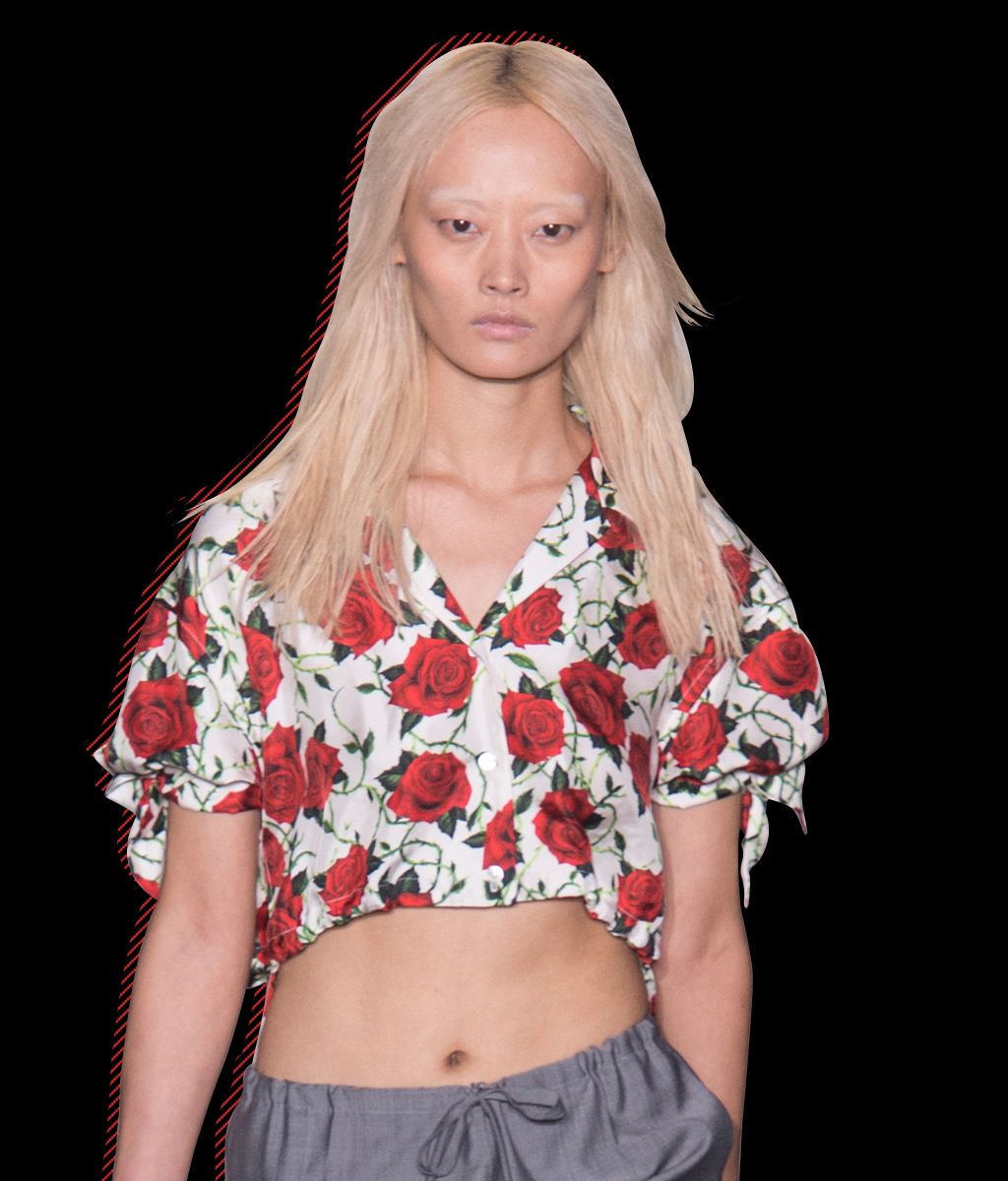 It’s no secret that people aren’t buying clothes at the moment. But it’s also no secret what would get them to buy again: great fashion at a very affordable price. A side of fries would help, too.

I am referring to Alexander Wang’s fantastic show on Saturday night at Pier 94. He had it all: cute clothes based on the classic dress shirt, now deconstructed as bras, cropped tops, and boxers. Also in the same sporty vein were silk pinstriped board shorts edged in black lingerie lace, minimal shirtdresses, and blousy cropped tops in a red-rose print, a fabric Wang also used for a lining. If you grew up in this country, in California, or Maine, or Michigan, you’d surely recognize Wang’s touchstones — bikinis, surfer clothes, your brothers’ boxer shorts, a pair of fringe moccasins courtesy of a souvenir trading post (and now finished with rubber soles).

Right after the show, Wang held a party — complete with a McDonald’s burger stand, a Slurpee van, and a 7-Eleven trailer stuffed with free snacks. I hardly need to describe the look of bliss on editors’ faces.

And there you have it: a recipe for success in 2016-17. Stick with what you know, don’t overthink anything, and pay attention to price. There is certainly a space in American fashion and retailing for $3,000 dresses, just as there are finer dining establishments than McDonald’s, but the arena is oversold, and small high-end brands cannot possibly compete with the LVMH class.

A visit to Co, a Los Angeles label showing at the Mercer Hotel, made this clear. Justin Kern, who founded the brand five years ago with his wife, Stephanie Danan, told me that Neiman Marcus has expanded the number of branches where it sells Co to nearly 20, largely because Danan and Kern have kept their prices in the average range of $1,000. (Yes, there are separates for a lot less, and the most expensive item in their new collection, a retro gold red-carpet number, is about $3,000.)

Kern says they’re able to do this because their clothes, made from European fabrics, are produced in Asia. He might also have noted, but didn’t, that big luxury brands tend to be greedy, padding their prices, because they know people will pay. An additional advantage is that Co’s type of luxury is quite accessible — softly ruffled camisoles, a sleeveless, below-the-knee black lace dress with a swishy skirt, a flounced silk crepe dress in a tiny floral print. Aesthetically, the clothes have a bit of a retro vibe, eased by simplified details. Recently, Kern and Danan partnered with Andrew Rosen of Theory, who has been looking for a designer who truly knows how to do luxury at a fair price.

I was also impressed with Simon Miller, a label designed by Chelsea Hansford and Daniel Corrigan that showed Saturday evening in the Marble Cemetery off Second Avenue. Their clothes are utterly simple — in fact, they don’t look like much. A ropy slip dress in dung brown. A light gray hoodie. Slouchy sweaters and washed ’90s-style denim. But Corrigan and Hansford are whizzes at restraint. That ropy slip dress is actually Italian leather knitted in tiny chain loops. It feels great, and the price is under $1,000. The hoodie is as soft as a washed Turkish towel. Hansford and Corrigan have made texture and muted colors — mossy green, mustard, terra-cotta — their signature, but their easy style is further evidence, I think, people want less complexity from fashion and more genuine value.

Mike Eckhaus and Zoe Latta, the artists behind the vanguard label Eckhaus Latta, now find themselves at a conventional crossroads — delivering on their success. Last season’s superb show at PS1 (my absolute favorite of the NY shows) brought them more attention for their organic way of issuing surprises from such mundane styles as pullovers and fleecy coats. The collection they showed yesterday at Seward Park, on the Lower East Side, told me two things: The designers weren’t sure of the direction they wanted to take and, at the same time, they wanted to meet certain retail standards for styling and construction. Hence the oversize coats with a higher level of finishing than Eckhaus Latta would have been capable of in the past, and t-shirts with a swag of jersey top-stitched to the front and hanging down one side — an idea that, frankly, seemed too predictable for the artists.

Don’t get me wrong: Many of the clothes captured Eckhaus’s chin-out, indie pride, and the fuzzy boots (imagine jumping into a box of lint) were terrific. But, clearly, Latta and Eckhaus are confronting the reality that fashion is a business, maybe a thankless business, but a business all the same. And their heart, I suspect, is somewhere else.

You may want to check out Ryan Roche, if you’re not already a fan of her knits. The designer has expanded into woven separates, mostly made in Italy, where she has recently acquired a Milan partner. The new silk and crepe pieces flatter her knits. Indeed, her clothes are far more body-conscious and versatile than in the past. And, who knows, a queen of beige may finally shock us with color.