When you analyze social networks, you can — and do — learn some really cool stuff. Early this year, for example, Science of Us reported on a social-network-approach to fighting bullying that involves targeting the most socially connected kids, and which, based on the large study researchers conducted to test its effectiveness in a bunch of New Jersey middle schools, appears to have been quite successful.

What happens when you analyze college students’ social networks? Writing in Contexts (PDF), a sociology magazine, Janice McCabe, a Dartmouth sociologist and the author of Connecting in College: How Friendship Networks Matter for Academic and Social Success, explains that she “used social network techniques to analyze the friendship networks of 67 MU students and found they clumped into three distinctive types—tight-knitters, compartmentalizers, and samplers.” (“MU” is the name of the midwestern university where McCabe conducted the research, presumably shielded for ethics-board-approval purposes.)

Here’s the basic rundown of what she found:

Tight-knitters have one densely woven friendship group in which nearly all their friends are friends with one another. Compartmentalizers’ friends form two to four clusters, where friends know each other within clusters but rarely across them. And samplers make a friend or two from a variety of places, but the friends remain unconnected to each other. As shown in the figures, tight-knitters’ networks resemble a ball of yarn, compartmentalizers’ a bow-tie, and samplers’ a daisy. In these network maps, the person I interviewed is at the center and every other dot represents a friend, with lines representing connections among friends (that is, whether the person I interviewed believed that the two people knew each other). During the interviews, participants defined what friendship meant to them and listed as many friends as they liked (ranging from three to 45).

The students’ friendship network types influenced how friends matter for their academic and social successes and failures. Like Valerie, most Black and Latina/o students were tight-knitters. Their dense friendship networks provided a sense of home as a minority on a predominantly White campus. Tightknit networks could provide academic support and motivation (as they did for Valerie) or pull students down academically if their friends lacked academic skills and motivation. Most White students were compartmentalizers like Betsy, and they succeeded with moderate levels of social support from friends and with social support and academic support from different clusters. Samplers came from a range of class and race backgrounds. Like Steve, samplers typically succeeded academically without relying on their friends. Friends were fun people who neither help nor hurt them academically. Socially, however, samplers reported feeling lonely and lacking social support.

It helps to see what these networks actually look like. Here’s the friendship map for Valerie, McCabe’s “tight-knitter”: 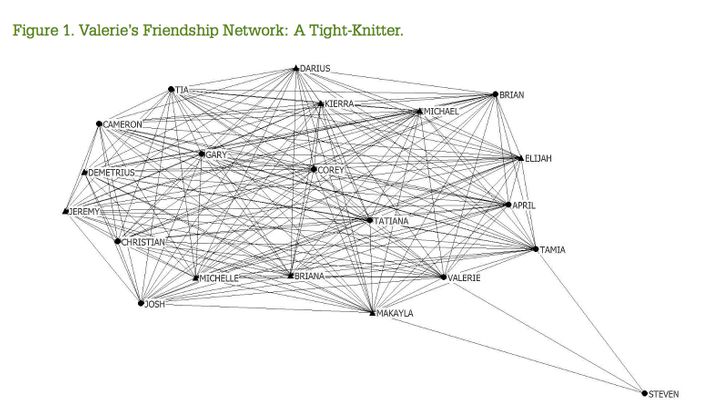 McCabe writes that “Being surrounded by a group where friends all know each other provided tight-knitters with multiple friends to whom they could turn. This cultivated a sense of belonging,” which was helpful for these students, given that “[m]ost tight-knitters were students of color who found the social support of their network helpful in navigating a predominantly White campus.” These students would often to refer their friend group as their “family” or “home,” she notes. 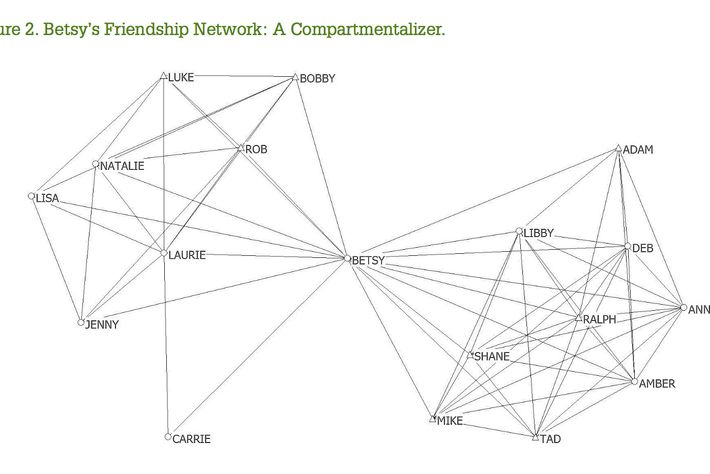 “Betsy’s 17 friends were divided into two clusters: those she met at MU, mostly on her dorm floor, and those from home, most of whom are students at other colleges.” Most of the compartmentalizers were, like Betsy, “White and middle-class,” and often they had “one socially oriented cluster and one academically oriented cluster.” Betsy, for example, didn’t really discuss intellectual subjects with her friends from home, but helped and was helped by her school friends all the time when it came to schoolwork.

And finally here’s the friendship network for Steve: 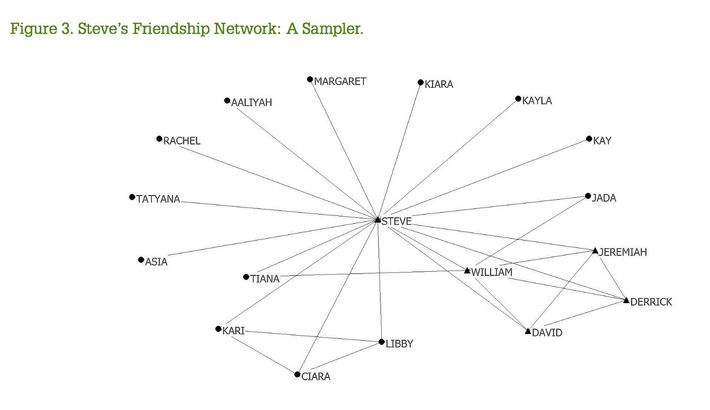 As McCabe describes him, Steve, in his third year of school at the time of her interview with him, had been disappointed by his college social life. He’d hoped to build up a more robust social network, but instead he has made a friend from a club here, a friend from a class there, and also has some friends from home, which is a four-hour drive away. So while he had the same number of friends as Valerie and Betsy, he didn’t feel like he had as much social support, and was frustrated that the friends he did have weren’t particularly engaged, academically.

Want to End Bullying? Get the Popular Students to Help
Why Straight Men Have Sex With Each Other

One of the key questions of McCabe’s research project is how the shape of her subjects’ social networks in college affects their outcomes later in life. She interviewed them five years after college, and found that while the different sorts of networks looked more similar than they did when the subjects were in college, her subjects still had the same basic shape of social network they’d had back then. Also, they were more likely to stay friends with people who had been important sources of social and academic support, which “helps explain why tight-knitters maintained more of their prior friendships (almost one-third) over time than did the samplers and compartmentalizers (with about a quarter retention among their college friends five years later).”

Overall, she writes, “Tight-knitters benefit from social support, but need to watch out for friends who can distract them or drag them down academically. Compartmentalizes find balance in social and academic involvement form different clusters, and samplers appear academically successful, but often feel socially isolated.” These are just broad categories, of course, and not everyone slots neatly into one or another in ways that are fully predictive of whom they will stay in touch with after graduating. But still, this research is yet another fascinating example of what can be uncovered by carefully analyzing social networks and their ramifications.

Here Are the 3 Types of College-Friendship Networks