Thirty-five years ago, Carolina Herrera showed her very first collection at Manhattan’s Metropolitan Club. The fashion designer was famous for her elegant style years before Diana Vreeland, a close friend, suggested she open her own fashion house. Herrera made her official debut in 1981 and went on to dress Estée Lauder, Jacqueline Kennedy, and Michelle Obama.

The new book Carolina Herrera: 35 Years of Fashion, out earlier this month from Rizzoli, celebrates Herrera’s anniversary in the fashion industry and is the first collection to showcase her entire career. The tome traces her designs over the years, focusing on the sophisticated, feminine silhouettes and dresses Herrera is known for. Which makes sense — she grew up dress shopping with her grandmother at Balenciaga in Venezuela and sewing clothing for her dolls as a girl. 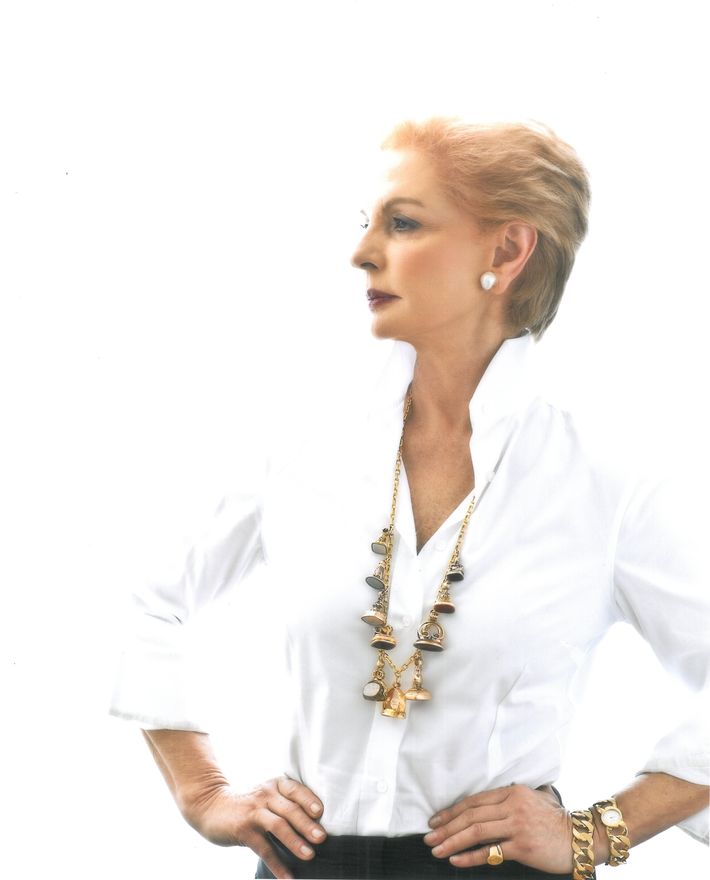 The Many Elegant Dresses of Carolina Herrera’s Career

See All
my two cents 8:00 a.m.
‘I’m Behind on Rent and Don’t Know What To Do’ There are a few different things you can try to get out of your lease.
By Charlotte Cowles
mfw fall 2021 7:50 a.m.
Watch the Prada Runway Show Livestream  Enjoy!
covid-19 Yesterday at 7:04 p.m.
Johnson & Johnson COVID Vaccine Deemed Safe and Effective Analysis by the FDA shows a third vaccine option offers strong protection against severe and fatal coronavirus infections.
tastemakers Yesterday at 6:49 p.m.
The Shoe Designer Who Loves a Chunky Heel Chelsea Paris’s Theresa Ebagua makes bold shoes inspired by her Nigerian heritage.
collaboration station Yesterday at 6:09 p.m.
New York Forever, Baby Proceeds from this Alex Mill slogan tee support city restaurant workers.
new faces of things Yesterday at 5:26 p.m.
This Lawyer-Turned-Model Is Now a L’Oréal Spokesperson Nidhi Sunil’s face has a new job.
power Yesterday at 2:57 p.m.
Former Aide Says Andrew Cuomo Sexually Harassed and Kissed Her In a Medium essay, Lindsay Boylan wrote that Cuomo created a work culture where harassment “is not only condoned but expected.”
power Yesterday at 2:37 p.m.
Working Two Jobs, and Barely Surviving The abject inhumanity of America’s minimum wage, as told by one home health aide.
By Bridget Read
power Yesterday at 12:42 p.m.
School Expels Kids Because of Their Mom’s OnlyFans Account A Sacramento mom said she and her family were subjected to harassment and abuse after the school community discovered her page.
power Yesterday at 11:43 a.m.
Ahmaud Arbery’s Mother Is Suing the Three Men Who Killed Her Son In a federal lawsuit, Wanda Cooper-Jones also accuses police and prosecutors of trying to “cover up” Arbery’s murder.
the cut podcast Yesterday at 11:11 a.m.
Introducing Chicano Squad With Cristela Alonzo On this week’s episode, the drawbacks of being “the first.”
By the Cut
covid-19 Yesterday at 9:30 a.m.
All My Friends’ Quarantine Bubbles Are Bursting Suddenly, everyone I know is abandoning their pod.
By Maggie Lange
crime Feb. 23, 2021
What We Know About the Death of Daniel Prude A grand jury has declined to indict any of the Rochester police officers involved in the fatal arrest.
the object of our affection Feb. 23, 2021
Why Not Wear a Scarf As a Dress? Another case for post-pandemic dressing.
nyfw fall 2021 Feb. 23, 2021
Your Favorite TV Shows in an Alternate Universe Coach reimagines iconic entertainment for fall 2021.
skin deep Feb. 23, 2021
Deciem Is Now a Billion-Dollar Company Thanks to Estée Lauder.
fashion films Feb. 23, 2021
Watch a Fashion Film That Explores Unrequited Love The latest installment in Miu Miu’s short-film series.
power Feb. 23, 2021
Gérard Depardieu Charged With Rape and Sexual Assault He allegedly assaulted a 22-year-old actress while helping her rehearse in 2018.
politics Feb. 23, 2021
Heidi Cruz Is ‘Pretty Pissed’ Someone Leaked Her Cancún Texts But honestly, what was she expecting?
saweetie Feb. 23, 2021
Saweetie on Wigs, the Early ’00s, and Personal Style Talking through the looks behind “Best Friend.”
More Stories