Commes des Garçons, Loewe, and Olivier Saillard remind us of the power of the image before smartphones. 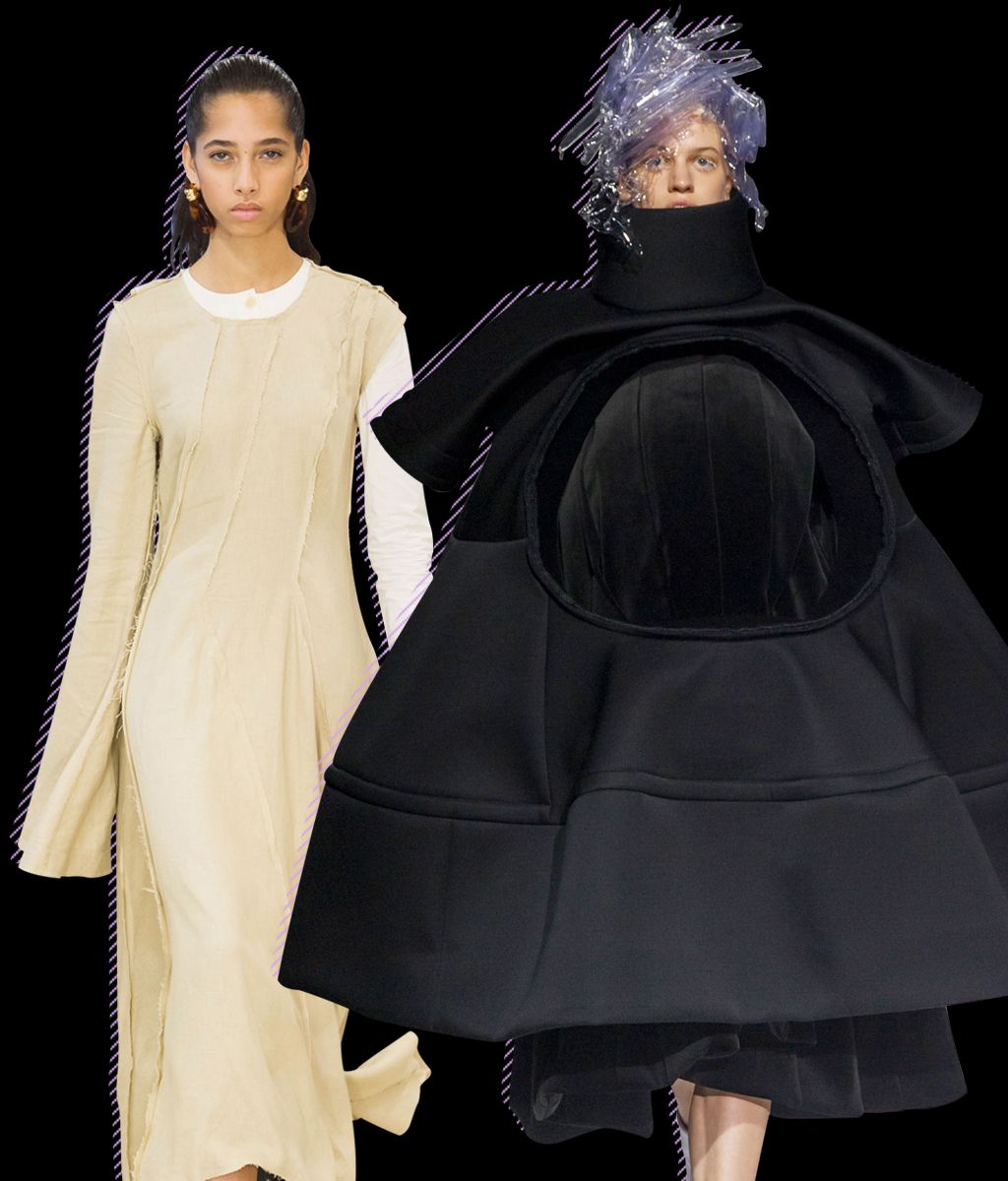 When we take a picture with our smartphones, it can seem that we are not so much recording the object as we are erasing it. We click, store, forget. Fashion is particularly vulnerable to erasure, partly due to the sheer number of brands competing for our clicks and mental storage space, but perhaps even more so because very few of the designs now are worth remembering.

Two exceptional collections from Loewe and Comme des Garçons, as well as a new performance piece by the curator Olivier Saillard, featuring Tilda Swinton and Charlotte Rampling, reminded me of the power of photography before smartphones. For several years, Saillard, the director of the Palais Galliera, has been staging performance pieces that ingeniously and almost wordlessly connect audiences to historic garments and key creators. In 2014’s “Models Never Talk,” a small cadre of runway icons, including Violetta Sanchez and Anne Rohart, evoked the early designs of Yves Saint Laurent, Rei Kawakubo of Comme des Garçons, and others. Wearing leotards and tights, they walked as though the actual clothes — the tuxedos of Yves, the kooky lumps of Rei — were imprinted on their bodies. Of course, this also showed how these designers had stamped their ideas on our consciousness, because it was easy to recall the clothes from the models’ gestures.

Who hasn’t experienced a similar desire with a Penn?

Saillard’s new work, “Sur-exposition,” explores the power of photographic images. He chose roughly 50 great photographs — by Penn, Brassai, Weston, Arbus, Newton, Mapplethorpe, to name a few — and substituted black poster boards in the appropriate sizes for the original images. The blanks could also imply that the photographs have faded away. Swinton and Rampling, acting as picture hangers in a gallery, took the boards from a cart one by one, calling out the image’s title and date, then placing them in an arrangement on the floor. They also reacted to many of the boards, although sometimes just the name and date was enough to send a chill up the spine. For Penn’s 1950 image of his wife, the model Lisa Fonssagrives, dressed in a black Lafaurie gown and holding out a bunch of roses, the women kneeled on the floor and lowered their eyes to within a millimeter of the board, as if trying to absorb its extraordinary beauty.

To evoke Penn’s portrait of Marcel Duchamp, in which the artist posed against a corner wall, the actresses placed two square boards side-by-side on the wall and then slowly brought the ends forward, creating a wedge — a form beloved by Penn. That produced a laugh of recognition. Swinton, who has worked before with Saillard, has an uncanny ability to make you imagine things, and with a minimum of gestures. For Mapplethorpe’s 1980 self-portrait in a leather jacket, she positioned herself in front of a large board held by Rampling, and settled her shoulders and face into the imaginary frame of the image until she assumed his pose.

It was almost heartbreaking, because you saw Mapplethorpe, so indelible is that image.

Denim and Feminism at Dior
3 Brilliant Shows From Paris
The Y Is Back in YSL, But Not Much Else Is Yet

In her own way, Kawakubo also explored the archaeology of memory at Commes des Garçons. Her two-word description of the show was “invisible clothes.” Given the enormous dimensions of the 17 garments — round, square, pod-shaped, coffinlike — and the fact that they engulfed the models, her description could be taken in several ways. She could be treating these dark hulks as a metaphor for how fashion has been sucked into a cultural black hole. (Recently, Kawakubo has talked about how much noise and confusion there is in fashion now.) On the other hand, the term invisible doesn’t mean nonexistent. It means the form isn’t necessarily obvious. Embedded in many of her creations — like a red tartan square based on a kilt and extended several feet beyond the model’s shoulders — was the shape of a classic shift, like a fossilized animal in stone.

Andrew Bolton, the Met’s chief costume curator, attended the show with Anna Wintour, and has been meeting with Kawakubo about plans to be the subject of next spring’s Costume Institute exhibit. Apparently she has given her approval. But the Met still has to announce it.

Many of the clothes in Jonathan Anderson’s Loewe collection also had the quality of an artifact — a long dress in washed beige linen with one sleeve (and the edge of the neckline) in off-white cotton, another whose worn texture recalled Issey Miyake’s pleating, and still another in a patchwork of rather ordinary scraps that added up to one amazing garment. For me, the patchwork dress suggested a very worn quilt — or, actually, the memory of a quilt, since the patchwork was so imprecise.

Old-fashioned tatting on the cuffs and collar of a leather jacket probably alluded to Anderson’s taste for antiques, recently revealed to Alice Gregory in an illuminating interview in the Times. He is also now mature enough as a designer to weave disparate ideas into his clothes without making them feel sodden with nostalgia, or annoyingly quirky. He leaves just a trace of the artifact, conserved in a very wearable and feminine shape, and it’s up to us to sense the source — or not.

celebrity 1:34 p.m.
Ben Affleck Is Looking for Reasons to Be Stressed Why else would he let his 10-year-old son get behind the wheel of a Lamborghini?
budgeting 1:00 p.m.
This Wedding Season Is Going to Cost You Budgeting for someone else’s big day.
By Emma Turetsky
why? 12:20 p.m.
Alec Baldwin Has Taken It Upon Himself to Interview Woody Allen This seems like a bad idea, but carry on.
brooding 12:00 p.m.
What Even Is a Resilient Child? An unexpected Instagram exchange made me consider how growing up with social media affects kids.
bet awards 11:27 a.m.
Jazmine Sullivan Wants Men to Talk About Abortion Too Presenters at the BET Awards were outspoken about the loss of Roe — but the men were noticeably silent.
how i get it done 7:00 a.m.
How Pro Wrestler and WWE Superstar Bianca Belair Gets It Done And a message to the Rock: You need to put her in your next movie.
By Jane Starr Drinkard
astrology Yesterday at 8:30 p.m.
Madame Clairevoyant: Horoscopes for the Week of June 27 Early Tuesday morning, Neptune retrograde begins. For better or for worse, you’ll have to reckon with the world as it actually is.
By Claire Comstock-Gay
sex diaries Yesterday at 8:00 p.m.
The Editor Tidying Up Just in Case His Lover Calls This week’s sex diary.
wtf Yesterday at 6:08 p.m.
A Truck Driver Ran Into Pro-Choice Protesters in Iowa Other protesters across the country reported instances of violence, including excessive force by police.
abortion Yesterday at 3:27 p.m.
Celebrities, Activists, and Politicians React to the End of Roe The Supreme Court’s Dobbs decision has, as expected, overturned our constitutional right to abortion.
abortion rights Yesterday at 3:19 p.m.
Olivia Rodrigo, Megan Thee Stallion, and Phoebe Bridgers Send SCOTUS a Message The singers expressed anger at the Dobbs decision during their Glastonbury sets.
pride Yesterday at 8:00 a.m.
Why I Won’t Be Wearing Pride Merch Today Each year brands roll out Pride collections, which are often maximalist and just about always an eyesore.
life after roe June 25, 2022
Rage, Fear, and Hope Outside the Supreme Court “We understand that poor women and women that are Black and brown are going to pay the most for this repeal. That’s why we’re here.”
life after roe June 25, 2022
Scenes From Friday’s Abortion-Rights Protest Outside the Supreme Court “I deserve access to health care. My daughter deserves access to health care.”
By the Cut
life after roe June 25, 2022
‘Get in the Streets and Stay in the Streets!’ Abortion-rights protesters channel their rage in Washington Square Park.
By Sarah Jones
life after roe June 24, 2022
Overturning Roe Is Just the Beginning Conservatives are already floating a national abortion ban and the overthrow of other privacy-based rights.
self June 24, 2022
Eating Daily Harvest Lentil Crumbles Sent Them To The ER Daily Harvest customers describe the medical hell that followed eating French Lentil + Leek Crumbles.
life after roe June 24, 2022
What to Know About Stocking Up on the Abortion Pill Even if you aren’t pregnant, some providers will let you buy the medication in advance.
life after roe June 24, 2022
God Help My Friendship With White Evangelicals After Dobbs Forced reproduction cannot mean anything other than slavery to Black women.
By Brittney Cooper
life after roe June 24, 2022
The Necessity of Hope Things are bad. They will get worse. But despair has never been an option.
By Rebecca Traister
More Stories