Think about your relationship to your home country. It’s probably fairly complicated, right? In all likelihood, there are some things you like about it, some things you think could be better, and so on. Sometimes this complexity gets a bit submerged. In the United States, for example, we’re often presented with caricatures of mindless, flag-waving zealots on the one hand and “anti-American” protesters on the other, but in reality almost everyone is in a vast middle. In reality, there are shades of nationalism (a broad term defined, more or less, as “patriotic feelings”) that are about more than just how big a fan you are of your home country.

This is the subject of a new paper in the American Sociological Review co-authored by sociologists Bart Bonikowski of Harvard and Paul DiMaggio of New York University. And they come to an interesting conclusion: It turns out that — in the United States, at least — there are a few distinct kinds of nationalism, with important differences between them.

As Bonikowski and DiMaggio argue in their paper, there’s something of a gap in the sociology literature with regard to American nationalism: Most of the extant research hasn’t approached the subject from a realistic perspective on how individuals cognitively process a big, messy concept like a country in their heads. “There hasn’t been much engagement with nationalism as a set of overarching cognitive structures, as relational networks of beliefs through which people understand the nation,” Bonikowski tells Science of Us. When we think United States, it triggers a web of related concepts — that is, not just some point on a “like/dislike” scale.

To try to gain a better, more nuanced understanding of Americans’ relationships to their country, Bonikowski and DiMaggio looked at several categories of General Social Survey responses from 2004: questions having to do with respondents’ level of nationalistic self-identification, pride, hubris, and “ethnocultural and civic criteria for national membership” (that is, questions about who counts as a “real” American).

By employing a statistical technique called latent class analysis, they were able to lump the respondents into groups that were statistically similar — that is, groups that tended to answer certain sorts of questions in certain ways. Four such categories popped out, three of them nationalist and the other less so (they’re summarized in this graphic, which is too big to embed but which nicely explains how each category was constituted):

-Ardent nationalists are, in a sense, your classic flag-wavers. Consisting of 24 percent of the sample in Bonikowski and DiMaggio’s study, they were more likely than any of the other groups to “feel very close to America,” to “report being ‘very proud’ of all 10 potential sources of pride,” and to “strongly agree with all five measures of national hubris.” Based on their responses to the questions about what it means to be a real American, “a large majority apparently viewed Jews, Muslims, agnostics, and naturalized citizens as something less than ‘truly American.’”

-The disengaged were the smallest group in the sample, comprising just 17 percent of the sample. The researchers gave the group this name because its members “withheld the strongest endorsement of even the most widely held nationalist beliefs and sentiments, because they professed particularly low levels of pride in state institutions, and because they appeared to refrain from wholesale engagement with a national identity.” Only 21 percent of them, for example, “reported feeling very close to the nation, compared to 56 percent for the remainder of the sample.” These folks just aren’t all that nationalistic, in the normal sense of the word.

-Restrictive nationalists “expressed only moderate levels of national pride but defined being ‘truly American’ in particularly exclusionary ways.” This was the largest group in the sample, at 38 percent, and its members were only moderate in their levels of national identification, pride, and hubris, while almost as restrictive as the Ardents when it came to who does and doesn’t count as a “real” American. This is an interesting combination we’ll return to.

-Creedal nationalists adhered to a “form of national self-understanding associated with a set of liberal principles—universalism, democracy, and the rule of law—sometimes referred to as the American creed.” They made up 22 percent of the sample, expressed high degrees of pride in the U.S., and were open-minded about what it meant to be an American.

Donald Trump seems a lot like a Restrictive. He has, for the most part, eschewed standard presidential talk about how great America is. Rather, Trump has focused on what he views as the country’s long, steep downward slide. In the Trumpian view, the United States has been overrun by illegal immigrants and criminals, and is really falling apart. The nation needs a strong man (or a strongman) to put it back together again, and part of that strength comes from recognizing that only certain people can be real Americans. “It does appear there is some similarity between the profile of this group in terms of the attitudes toward the nation and what we see among Trump supporters: ethno-cultural exclusion, along with a low level of pride in the state,” says Bonikowski, though he was careful to add that there was no way to prove, based on this data, that Trump draws disproportionately from Restrictives.

There’s an interesting catch, though — while white Restrictives may well constitute some of Trump’s key bloc of support, there are also a bunch of black and Latino Restrictives who, while endorsing the same general genre of nationalism, got there for very different reasons and who are very unlikely to be Trump supporters. In fact, African-Americans were “strongly overrepresented” in this group, the researchers wrote — 68 percent of the African-American respondents in the sample fell into this group, for example, and they were mostly Democrats. Their relative lack of pride in and identification with America probably comes from a very different place: In many cases, it could stem from unhappiness about how the U.S. has treated racial minorities, said Bonikowski. So, zoomed out, these black and Latino Restrictives look similar to their white counterparts, in that they answer certain questions in similar ways, but their politics are probably very different.

Bonikowski and DiMaggio also looked at data from the same survey in 1996 and 2012, and they noticed something interesting when it came to how those years differed from 2004: 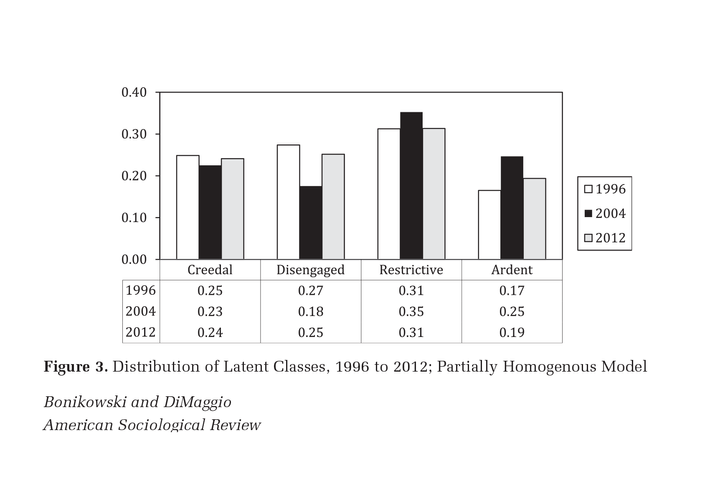 Restrictives and Ardents were significantly higher percentages of the population in 2004 than they were in other years. “In the paper, we make the argument that this is consistent with a post-9/11 effect,” says Bonikowski. “There’s a lot of research that shows that during moments of crisis, and especially national-security crises and attacks from abroad, there’s a rally-around-the-flag effect where people come together and have higher degrees of trust in political institutions and political leaders” — as well as heightened outgroup hostility. That’s what the 2004 portion of the graph seems to show. Then, in 2012, things reverted a bit to where they had been.

All of which raises an obvious question: Could the Trump campaign, a complete outlier that has featured some of the darkest, angriest rhetoric in modern electoral history, have a similar shock-to-the-system effect that rejiggers the United States’ nationalistic complexion? “It’s a little hard to say,” says Bonikowski. “I think the one thing that I would say is that these four ways of understanding the nation have been around for a long time, at least since 1996, although presumably earlier, though we don’t have data on it. There’s already kind of fertile ground for the kind of appeals that Trump is making.” He says he and DiMaggio are collecting more data and will hopefully know soon whether Trump’s campaign has led to an increase in ardent or restrictive nationalism — as opposed to, in effect, tapping preexisting stockpiles. Either way, though, according to Bonikowski, “What seems to be the case is that Trump’s discourse is mobilizing people around a certain way of understanding the nation: one that’s culturally exclusionary, and one that sees America as being in deep trouble.”

These Are the 3 Types of American Nationalism