Steven Holl is one of a handful of global architects who have changed the way we move through cities. (See, for instance, his Linked Hybrid complex in Beijing, which connects eight towers via pedestrian walkways.) Now he’s taken that same spirit of invention to his upstate backyard. It happened when he discovered that a 28-acre piece of land in Rhinebeck down the road from his weekend house was going to be turned into a five-house subdivision. He bought up the property and set about building a 918-square-foot guesthouse, which sits in a clearing in the woods and glows from its space-age windows; the glass orbs seem almost scooped out of the building. 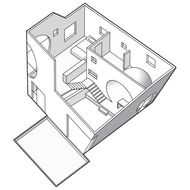 “This house sleeps five, but there are no bedrooms,” Holl says of the unusually meandering, open space, dubbed “Ex of In House,” which was designed to disturb the landscape as little as possible. The goal was to build a passive, hyper-energy-efficient house. This involved geothermal cooling and heating and a flexible solar roof panel, as well as siding made of post-consumer recycled glass. “It’s called Poraver, comes from Germany, and hasn’t been used much in America,” he says. In addition to using high-tech German glass and 3-D-printed models, Holl still relied on actual humans for much of the work: Javier Gomez and his team built the interior sphere in three layers of thin birch plywood that was carved and sanded without machines. They also fabricated the curved windows. “It was all done by hand beautifully,” Holl says.

*This article appears in the October 17, 2016, issue of New York Magazine.

“We were going to use Duratherm mahogany windows, but that would have been hard with the curved pieces,” architect Steven Holl says. So he turned to his contractor Javier Gomez, whose team did it by hand.

“The light fixtures are all 3-D-printed in cornstarch-based bioplastic. We printed them in our big 3-D printer here in the office,” Holl says.

Holl wanted the house to take up as little space as possible. “I set out to preserve the landscape and then just put one guesthouse there as a sort of compressed center of the site.”

“The everyday miracle of a Hudson Valley sunset is encircled west, partly south, and down through the glass floor.”

“The stairs are natural mahogany — no preservatives on them, no formaldehyde. The whole house is made with super-green blown-in organic insulation; you can practically heat the house with a candle.”

Upstairs are designated bed nooks that feel private despite the fact that there are no doors.

“The kids call it the mountain,” Holl says of this bed, which sits atop the “entry sphere” for the foyer below.

Tour a Forest Guesthouse That Sleeps 5, But Has No Bedrooms

recommendations 28 mins ago
18 Best Butt Plugs You Can Buy Online According to experts.
okay?? 2:41 p.m.
Oscar Isaac Is Still Struggling to Explain That Red-Carpet PDA Apparently he and Jessica Chastain are … like flatworms?
love and war 2:03 p.m.
Tinder’s Fatphobia Problem The dating app’s hold on the culture began around the same time as the mainstream body-positive movement. So why hasn’t anything changed?
By Kelsey Miller
do i need this? 2:03 p.m.
Do I Need a One-of-a-Kind Piece From Éliou’s New Clothing Line? The collection will pair nicely with the beaded necklaces beloved by Harry Styles.
intimacy coordinators 1:17 p.m.
Amanda Seyfried Reflects on Feeling Pressured Into Nude Scenes “I didn’t want to upset anybody, and I wanted to keep my job.”
??? 12:12 p.m.
Prince William Apparently Has Another Sexy Nickname In addition to the “Prince of Pegging,” of course.
parenthood 12:05 p.m.
Mindy Kaling Does Not Care Who You Think Her Kids’ Father Is Apparently, speculation that it’s B.J. Novak doesn’t bother her.
sobriety 12:00 p.m.
‘Can I Stay Sober Without Counting the Days Since My Last Drink?’ If adding up the days one by one makes you feel bad, rethink the math.
By Ana Marie Cox
life after roe 11:20 a.m.
Mom and Teen Daughter Accused of Illegal Abortion Based on Facebook Messages Police obtained Facebook messages in which they discussed ending the then-17-year-old’s pregnancy with pills.
encounter 10:00 a.m.
Abbi Jacobson Knows the Pressure Is On A League of Their Own, her first big project since Broad City, premieres this Friday.
By Katie Heaney
celebrity Yesterday at 2:29 p.m.
Has Camila Cabello Moved on With a Dating-App Founder? She was recently seen holding hands with Lox Club founder Austin Kevitch.
culture Yesterday at 1:10 p.m.
How Jennette McCurdy Survived Child Stardom — and Her Mother She spoke with the Cut about her memoir, her mother’s abuse, and finding solace in Disneyland.
fashion Yesterday at 12:23 p.m.
Japanese Designer Issey Miyake Has Died at 84 Known for his innovative Pleats Please collections, Miyake was a fashion innovator for five decades.
ask a boss Yesterday at 12:00 p.m.
‘I’ve Been Overworked for Months and My Manager Won’t Help’ You need to be less invested in keeping your office running smoothly.
the bachelorette Yesterday at 11:51 a.m.
So, Who’s Going to Win The Bachelorette(s)’? Mid-season front-runners have emerged.
goat Yesterday at 11:49 a.m.
Serena Williams Announces Her Retirement From Tennis In a Vogue essay, she says she plans to step away from the sport after the U.S. Open wraps next month.
gone sale-ing Yesterday at 11:21 a.m.
Restock Your Fall Beauty Lineup During Dermstore’s Anniversary Sale These fall faves will keep your skin glowing like it’s summer.
all of the lights Yesterday at 11:00 a.m.
11 Light-Therapy Masks That Will Make Your Skin Glow Even after you take them off.
celebrity Yesterday at 10:20 a.m.
Did Rita Ora and Taika Waititi Secretly Get Married? Reports of an intimate London wedding have emerged after they were spotted wearing matching rings in Paris.
allegations Yesterday at 9:40 a.m.
All the Allegations Against Ezra Miller The actor has been charged with felony burglary in Stamford, Vermont.
More Stories