Like so much of Trump’s speaking, there’s a certain anti-poetry to his statement, a tangled web of biases, misapprehensions, and disinformation. There are several revealing and fascinating and disturbing ways he is wrong. Let us count them.

First of all, demographers marked a historic “black flight” between 1960 and 1990, when African-Americans moved out of cities and into the suburbs, a trend that’s continued to increase. According to the Brookings Institution, 37 percent of blacks living in large metro areas were suburbanites in 1990. That portion grew to 44 percent in 2000, then up to 51 percent in 2010. Relatedly, about 14 percent of African-Americans live in rural areas — where, like everybody else, people tend to be poorer — mostly in the southeast, as a legacy of plantations. In short, Sebastian notes, “using ‘inner city’ as a stand-in for ‘black’ is even less accurate than using ‘suburban’ as a stand-in for ‘white.’”

2. “Inner cities” have insanely valuable property.
If Trump is actually talking about the geographic centers of American cities, then he should know — and probably does know — that their property values are going absolutely nuts. The real-estate service Redfin, defining inner city as “the 5 kilometers around the city center of a given metro area,” finds that the home prices are thriving. Home prices in inner cities have gone up 52 percent since 2010, while suburban homes have lagged behind at a 34 percent increase, as the below chart attests. 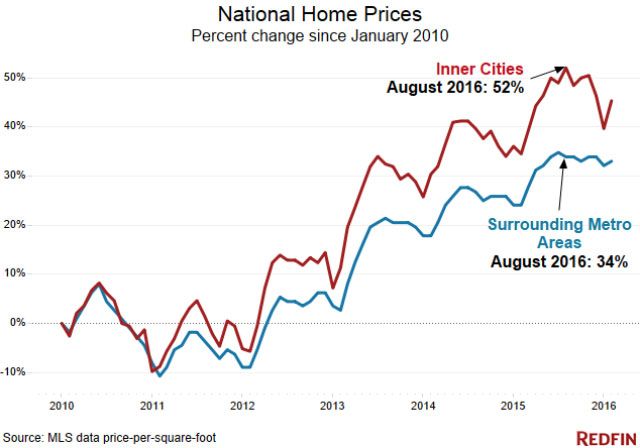 3. Poor people don’t live in city centers; the rich do.
Economist Jed Kolko finds that while the U.S. population as a whole got slightly more suburban from 2000 to 2014, the wealthy have gotten way more urban. The poorest 10 percent of households were 12 percent less likely to live in urban neighborhoods, and the richest were 12 percent more likely to live in the city. Again, a chart:

If inner cities were failing, they wouldn't be attracting so many rich people. https://t.co/nAwE48yOW3 pic.twitter.com/O9IFygLYOI

It’s not only wealthy, but white, Kolko finds: The portion of blacks living in high-density neighborhoods fell by 12 percent in that period, while it increased by 24 percent for whites.

All this points to gentrification. In an analysis of the country’s 50 largest cities, Governing magazine found that 20 percent of lower-income and lower home-value neighborhoods have seen gentrification since 2000, more than double the 9 percent rate from the 1990s.

4. “Inner city” is an outdated, imprecise term, but one that resonates with Trumpist ethnocentric nostalgia.
The phrase inner city spiked in the 1960s and ‘70s, then fell off in the 1990s, according to Google’s Ngram viewer, which tracks the use of words in the search giant’s store of digitized books.

Emily Badger, the first reporter I saw with the good sense to do an nGram analysis, makes the argument in the New York Times that it doesn’t even matter, really, that “inner city” isn’t demographically accurate. Like so much of Trump’s arguments, it’s not about representing reality, but activating certain emotional responses (fear, distrust) in certain populations (white people).

The terminology doesn’t have to be accurate, Johns Hopkins University historian N.D.B. Connolly tells Badger. “What it does is it conjures a narrative about what happened in America during and after the 1960s,” he said. “The inner city is the place that burned when King was assassinated. It was Watts. It was the place Ronald Reagan had to try to conduct the war on drugs.”

In addition to drumming up his trademark nostalgia, this allows Trump to define the residents of the inner city as the other, clearing the way for “law and order” and “tough” policing to be the best policies to reduce crime, rather than putting more cops in high-crime areas, not simply to arrest as many people as possible, but to do the community-oriented policing that’s shown to actually reduce crime. If Trump does actually want to talk about urban inequality, better phrases might be “disinvested neighborhoods” or “neighborhoods of concentrated poverty.” If you frame it as “inner cities,” Connolly says, then it sounds like the lack of opportunity and penchant for violence that is the culture of some urban neighborhoods is of their own making, rather than the result of decades of segregation and redlining.

5. America still has half the crime it did in the early 1990s.
Though the national murder rate has risen over the past year, America is still way safer than it was back when Trump was coming up in the world. Today, the national crime rate is still about half of what it was at its peak in 1991, and there’s good data suggesting that there’s never been a safer time to be a child or a cop in the U.S. Contrary to right-leaning rhetoric, Obama’s America is way safer than Reagan’s ever was.

Still, year after year since the early 2000s, Americans have thought that the national crime rate was increasing, even when it wasn’t. Media theorists offer “Mean World Syndrome” as an explanation: Kids see an estimated 8,000 television murders before they turn 12, so they grow up thinking that killing is everywhere — even when it isn’t. And when a feared yet beloved reality star tells them that it’s getting way worse, who among us can tell them otherwise?