The gay man once blamed for launching AIDS in 1980s America has finally been exonerated by modern science.

Thirty-two years after his death, Gaëtan Dugas, the French-Canadian flight attendant who was long vilified as “Patient Zero” of the AIDS epidemic in the U.S. — and once described by the New York Post as “The Man Who Gave Us AIDS” — was declared innocent in the latest issue of Nature. The study, according to the New York Times, concluded that the strain of HIV Dugas had was already widespread in America years before he arrived.

For the past three decades, perhaps no one embodied the toxic stereotype of recklessly depraved gay male sexuality more than Gaëtan Dugas. He was first widely introduced to the world in the opening pages of And the Band Played On, the late journalist Randy Shilts’s epic 1987 account of the first years of AIDS in the U.S., cruising a San Francisco bathhouse fully aware he has Kaposi’s sarcoma, a disease mysteriously plaguing homosexuals. Ignoring his doctors’ insistence to abstain from sex, Dugas turns to a man with whom he’s just copulated and says, “I have gay cancer. And you might get it, too.”

Reading the book in college in the late 1980s, I remember vividly the shock and revulsion I felt toward Dugas in that moment. How could someone be so indifferent, so selfish, so vengeful? It was, like so much of Shilts’s book, a sordid, dark picture of pre-AIDS gay sexuality, one that had almost made me relieved that a brutal epidemic had replaced erotic abandon with prudence, restraint, and responsibility. Gay men, the moral went, were responsible for the spread of AIDS because of their unwillingness to abandon their Bosch-like sexual playgrounds, while a government and a culture that saw gay people as less than human ignored, and even mocked, their suffering.

Shilts coined the term “Patient Zero” for Dugas in a leap of early 1980s scientific dot-connecting that laid the blame for the spread of HIV in the U.S. in the mid-to-late 1970s squarely on his shoulders. Because of his encounters with hundreds of other highly sexually active, jet-setting men in New York and San Francisco, he became the gay Typhoid Mary. Though unlike Mary, Dugas did it knowingly, gleefully infecting others until he got his due and died of AIDS in 1984.

And that’s how he would have been remembered had we not, in all the intervening years, learned more about HIV; that it takes years, not months, to go from infection to outward symptoms; and ultimately that the virus could be sequenced to learn its provenance. In 2007, a study found that HIV, which started in Africa, traveled from Haiti to the U.S. in 1969, years before Dugas was having sex in America. And then came last week’s revelation, reported in the Times, that the particular strain of HIV responsible for nearly every AIDS case in the United States was carried from Zaire to Haiti around 1967 before spreading from there to New York City around 1971 — only making it to San Francisco by 1976. Dugas’s blood, which was sampled in 1983, had an HIV strain that had already widely hit gay men in New York before he began making the rounds in the city after being employed by Air Canada in 1974.

Even “Patient Zero” was a misnomer, based on a mistaken reading. Early 1980s epidemiologists in California had marked Dugas’s file with the letter “O,” meaning coming from “outside” the state, not a zero. 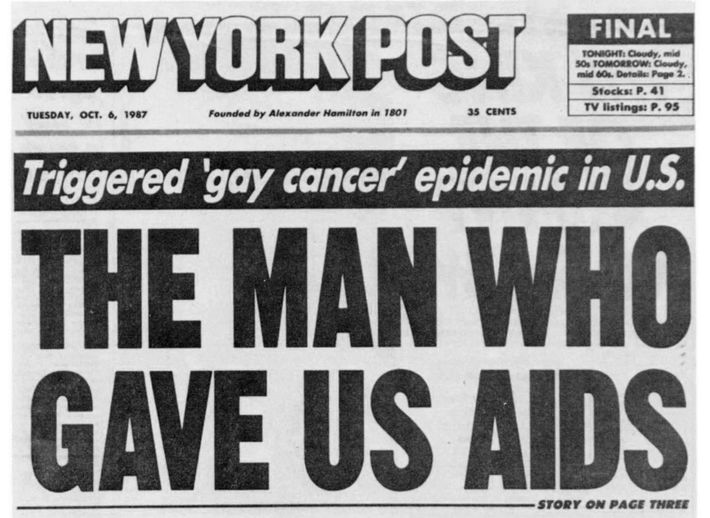 Shilts, who was himself a gay man who died of AIDS in 1994, admitted he found the whole idea of calling Dugas Patient Zero too “catchy” to pass up — and though he said that he deplored the fact that the book’s editor, the gay publishing pioneer Michael Denneny, decided to play up Dugas’s villain status in the book, he went along with it.

And so it was, according to How to Survive a Plague, David France’s extraordinary new account of the AIDS epidemic in New York City between 1981 and 1996, coming out next month, that “in death, Gaëtan Dugas’s life took on a more sinister interpretation.” Having painted Dugas as “a hardened sociopath who did his best to spread the disease far and wide,” Denneny admitted to France years later that, “Randy didn’t want to [demonize Dugas]. It was my idea. And I regret it.”

Thankfully, a more nuanced view of Dugas emerges in How to Survive a Plague, which is the book version of France’s Oscar-nominated 2011 documentary. We see him not just going for broke sexually, but at a key community forum on AIDS in 1983 in Vancouver, where he moved in the final years of his life. There, he stood up and spoke sharply in defense of his own humanity: “You shouldn’t fear someone who has AIDS, or has symptoms of AIDS, because there’s no specific reason why you should get in contact with AIDS — with an infectious agent,” he said.

He also questioned the idea that Kaposi’s sarcoma was necessarily linked to an infectious agent, especially in the absence of a definitive test (which wouldn’t come along commercially for another two years). And even though by 1983 doctors and researchers were fairly certain that AIDS was being spread by a pathogen of some sort, what may seem like denial on Dugas’s part today reflected what was still widespread doubt and confusion in the gay community in those early years about the source of the illness.

Dugas was far from the last person with AIDS to be painted as a monster. In subsequent years, the demonization often turned toward black men like Nushawn Williams and “Tiger Mandingo.” The idea that people with HIV/AIDS were willfully spreading the disease led to the passage of laws in numerous states that singled out HIV-positive people as criminals, even in instances where a condom had been used or, in later years, when the HIV-positive person was on medication and hence (as we’ve learned in the past decade) essentially not infectious. An entire movement, The Sero Project, has sprung up to get these discriminatory and medically uninformed laws off the books

Why do we demonize? Why do we need our Gaëtan Dugases? Perhaps it’s because, in the face of something as fearful as AIDS in its early days, we can only feel safe ourselves if we can locate risk elsewhere, in the body of someone who courted it and therefore must be evil, or at least depraved. Certainly this must have been the case for gay men like Shilts, enacting his own brand of gay respectability politics in an era where the very essence of being gay, the desire to connect one’s body to that of other men, became intimately linked to illness and death.

“Randy was not sex-positive,” says France. “Like Larry Kramer, he saw only the perils of sex. They both took up arms against unbridled sexual expression, which they said was essential to the fight against the plague.”

So who was Dugas, then? For one thing, he was one of countless gay men who found pleasure and perhaps even a life’s purpose in a sexual career at a time when gay people were almost entirely barred from such institutions of mainstream life as marriage, child-rearing, and the natural linkage of one’s public and private selves. It’s a benefit of our current era both that many (not all) queer people have those options if they choose them and that, increasingly, straight people don’t have the phobic, rigid attitudes about sexual pleasure, or even monogamy, that they held in the age of Reagan. (Ask yourself: Would a Miss America today be dethroned merely for having posed nude in her past? Do we even care about Miss America that much anymore?)

Gaëtan Dugas found himself the common denominator of a relatively small cluster of early AIDS cases. He was not, as Shilts conjectured, “the person who brought AIDS to North America.” Science has vindicated him. He can finally rest in peace, and perhaps he even has a full dance card in the eternal bathhouse, free of illness and death.

Tim Murphy is the author of the novel Christodora.