A lot of ink has been spilled trying to understand the appeal of Donald Trump, given how much of an outlier he is in terms of his demeanor, his judgement, his treatment of women, and so forth. And much of this discussion has focused on race and identity, which is understandable given Trump’s proclivity for bashing immigrants and Muslims, whether proposing a giant border wall with Mexico or his banning all Muslims from entering the country until “our leaders figure out what the hell is going on” with the 1.6 billion members of the world’s second-largest religious group.

Recently, on the Conversation, the social psychologists Eric Knowles of New York University and Linda Tropp of the University of Massachusetts Amherst published a really interesting blog post running down some new data they’ve collected on the subject. The key takeaway is that the whiter white people feel, the more likely they are to look favorably upon, and support, Trump.

The authors offer a really important short lead-in to their results, and it’s worth reading in full:

When we talk about white identity, we’re not referring to the alt-right fringe, the white nationalist movement or others who espouse racist beliefs. Rather, we’re talking about everyday white Americans who, perhaps for the first time, are racially conscious.

The concept of “garden variety” white racial identity stands in contrast to conventional wisdom. In the last three decades of scholarship on whiteness as a race, the prevailing view has been that most whites fail to notice their own whiteness. In a society dominated by white people, whiteness simply fades into the background. Just as fish fail to notice the water around them, whites are unlikely to think about how they are members of a distinct group.

Our research shows that the era of “white invisibility” is coming to a close.

Non-Hispanic whites are projected to become a minority in the year 2044. This increasing diversity across the country is making whites’ own race harder and harder to ignore. Political and social phenomena, from Barack Obama’s presidency to the Black Lives Matter movement, are making whiteness even more salient to white Americans.

Knowles and Tropp decided to survey a representative sample of 1,700 white Americans to see how all these different factors — sense of racial identity, sense that the country is becoming less white, and support for Trump — correlated. Their findings suggest, as various other pieces of evidence have, that racial concerns really are quite salient when it comes to many white Americans’ support of Trump.

For example, the more Hispanic a neighborhood a given white respondent lived in, the more white they felt: 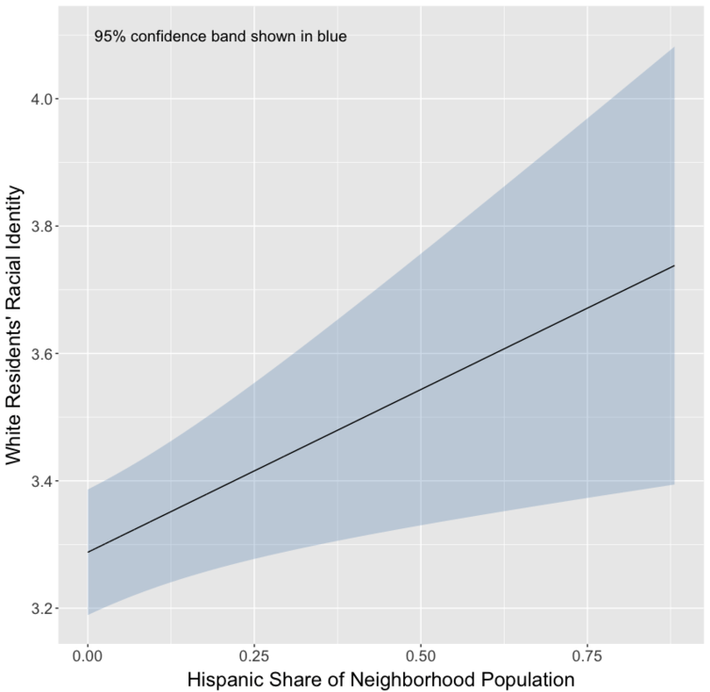 And the more white they felt, in turn, the more likely they were to support Trump: 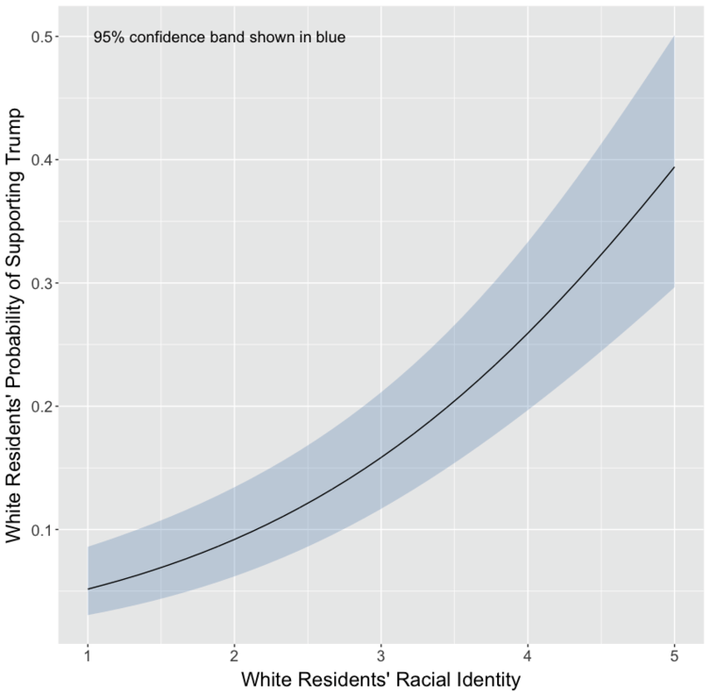 Combining the above two findings, the more Hispanic a given white respondent’s neighborhood was, the more likely they were to be a Trump supporter. 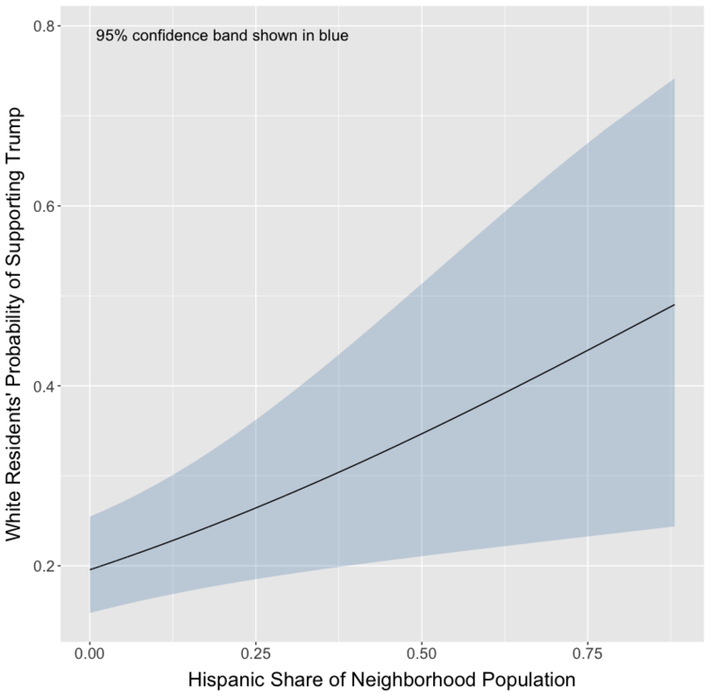 If you’ve been following this stuff closely, you might be asking: Okay, but could some of this really be about class? Maybe poorer Americans are more likely to identify as staunchly white and/or to live in Hispanic neighborhoods, and more likely to support Trump? After all, there have been a lot of clashing think pieces about whether race or class is really driving support for Trump (an oversimplified framing, to be sure). An astute commenter posed exactly that query at the bottom of Knowles and Tripp’s post. “Great question,” responded Knowles. “The analyses we describe don’t control for respondents’ income, so I went back to the data to test your idea. The relationship between neighborhood Latino population and white residents’ Trump support doesn’t change when income (or education level) is included in the model. Thus, it doesn’t seem that income differences are the reason for the link between Latino population and Trump support.”

This particular research focused on the connection between white racial identity and neighborhood ethnic composition. One interesting followup question is how perceived neighborhood (or country) ethnic composition connects to identity and support for Trumpishly authoritarian leaders. After all, Trump and other politicians like him regularly invoke an invasion narrative in which the country is under attack at the hands of untold hordes of Mexican and Muslim immigrants. Recently, for example, he made the hysterically gonzo claim that Hillary Clinton “wants to let people just pour in. You could have 650 million people pour in and we do nothing about it. Think of it. That’s what could happen. You triple the size of our country in one week.” And the media outlets that support him and other authoritarian politicians often devote disproportionate attention to crimes committed by members of certain groups and the threats posed by members of these groups, further raising the salience of this idea.

3 Insights About Donald Trump’s Constant Lying
Why Is Donald Trump So Much More Thin-skinned Than Hillary Clinton?

So, in much the same way constant consumption of bad news seems to cause us to view the world more negatively than it really is, could constant exposure to false and overblown claims about America’s ethnic composition and the “threat” it poses to white people cause white people to feel whiter, and in turn to be more likely to support authoritarian candidates? At the very least, there is some evidence (PDF) suggesting a link between Fox News consumption and lower support for Mexican immigration.

One other interesting question Knowles and Tropp’s data can’t answer is to what extent this phenomenon is distinct to Trump. That is, what would these graphs look like if you plugged in a candidate like Mitt Romney — a Republican, yes, but one whose campaign was significantly less characterized by overt hostility toward Mexican immigrants? Maybe this is a Republican thing, not a Trump thing, in other words (though it feels intuitively unlikely).

Either way, there’s plenty of theoretical underpinning to the idea of racial identity mattering more when a group feels its majority status slipping, or looks around and suddenly sees signs in strange languages popping up in what they view as “their” neighborhoods. Whatever the details about what is causing what, it certainly stands to reason that as America heads closer and closer to being a majority-minority country, a sizable subset of white people are going to view this as a profound threat to their way of life and well-being. If what we’ve seen so far is any indication, the resultant politics could be quite ugly. Donald Trump probably won’t be the last Donald Trump.

dream date 8:00 a.m.
Bilal Baig Steps Into Their Comfort Zone Sort Of’s star and co-creator finds their sweet spot.
gone sale-ing Yesterday at 6:24 p.m.
What You Need From Net-a-Porter’s Cyber Monday Sale According to the Cut Shop editors.
fashion Yesterday at 4:51 p.m.
What to Know About the Balenciaga Ad Scandal The fashion house is under fire for two separate campaigns that consumers say promote child exploitation.
black friday Yesterday at 3:00 p.m.
24 Best Cyber Monday Fashion Deals From Everlane, Nordstrom, Saks, and more.
celebrity Yesterday at 1:00 p.m.
Is Minka Kelly Dating the Imagine Dragons Guy? She and Dan Reynolds went out for dinner for … five hours?
chaos Yesterday at 12:16 p.m.
Elon Musk’s Bedside Table Is Even More Terrifying Than You’d Expect Which is more concerning: the multiple guns or the cans of caffeine-free Coke?
brooding Yesterday at 12:00 p.m.
Are There Any Kids’ Books Out There That Are … Actually Good? Wizards and dragons need not apply.
By Kathryn Jezer-Morton
gone sale-ing Yesterday at 10:13 a.m.
33 Amazon Gift Ideas That Are Also On Sale For Cyber Monday Kill two bird with one stone.
celebrity Yesterday at 9:40 a.m.
Pete Davidson and Emily Ratajkowski Hit a New Relationship Milestone They appeared very happy to be together at Sunday night’s Knicks game.
gone sale-ing Yesterday at 9:04 a.m.
21 Cyber Monday Lifestyle Deals to Make Your Humble Abode a Little Less Humble It’s all in the details.
gone sale-ing Yesterday at 8:06 a.m.
The 29 Best Cyber Monday Beauty Deals Tatcha, Sephora, and Nordstrom are already offering some great discounts.
how i get it done Yesterday at 7:01 a.m.
Aurora James Is Too Busy For This Interview The Brother Vellies designer talks 80-hour workweeks, supporting Black entrepreneurs, and wearing Issey Miyake to the gym.
astrology Nov. 27, 2022
Madame Clairevoyant: Horoscopes for the Week of November 28 Jupiter retrograde is ending, so you can put the rose-colored glasses back on.
By Claire Comstock-Gay
sex diaries Nov. 27, 2022
The Divorced Lawyer Who Loves Getting Ready for Dates This week’s sex diary.
snacks Nov. 25, 2022
I Can’t Shut Up About Spam Figgy Pudding It’s so wrong, and yet so right.
culture Nov. 25, 2022
Rebranding Midlife Celebrities like Naomi Watts, Stacy London, and Judy Greer are determined to make a business out of menopause.
5 questions with... Nov. 25, 2022
For Quentin Plair, Stripping Wasn’t Always on the Menu But the Welcome to Chippendales star’s confidence was renewed after playing an exotic dancer on TV.
5 questions with... Nov. 25, 2022
How Amanda Gorman Fostered Her Confidence It didn’t always come naturally, but the poet built it with affirmations from her mom and using her imagery as activism.
¡hola papi! Nov. 25, 2022
‘I Lost My Creative Spark’ Don’t think about the book you haven’t written or the drawing you haven’t sketched out. Think about what role you want art to play in your daily life.
By J.P. Brammer
star material Nov. 24, 2022
A Handy Guide to Astrology’s Black Moon Lilith Lots of mystery and intrigue with this one.
More Stories