Last month, a new type of intrauterine device, or IUD, called Kyleena joined the other four on the market. Lots of women love their IUD because it’s a set-it-and-forget-it method that’s more than 99 percent effective at preventing pregnancy, which lasts for years but that you can have a doctor remove at any time. So which one is best for you?

The five kinds all work roughly the same way: They thicken cervical mucus so sperm can’t enter the uterus to fertilize an egg. In the rare event that some mighty swimmers do get past the cervix, the IUD’s active ingredient (either copper or synthetic progesterone) makes it more difficult for them to travel through the uterus and tubes toward an egg.

Insertion is the same with all of them: not comfortable, exactly, but usually manageable. But the devices have different amounts of hormones — or none at all — and will change your periods in different ways. Among the hormonal IUDs, the higher the hormone amount, the more likely it is that your period will stop after six months to a year. Here’s how they compare to each other.

The IUD Is Making a Comeback

Best for: Women who want to avoid hormones.
Skip if: You have heavy periods.

The Old Faithful of IUDs, ParaGard is a non-hormonal option where copper acts as the sperm deterrent. It’s approved for ten years, but studies say it’s actually effective for 12. Some women love the idea of birth control without hormones, but if you have naturally heavy periods or if your doctor says you have endometriosis, getting a copper IUD might make an already bad situation worse.

Keep in mind, too, that you might not remember what your period is like sans hormones if, say, you’ve been on the pill for a decade, says Laura MacIsaac, MD, MPH, FACOG, director of family planning at Mount Sinai Health Systems and associate professor of obstetrics and gynecology at the Icahn School of Medicine. “The first three periods after a new ParaGard insertion can be … pretty bad. Just heavier and crampier. And then, [with] most women, their period gets back to their baseline,” Dr. MacIsaac says. But she points out that a heavy flow doesn’t happen to every woman — some might not notice a difference.

Best for: Women with heavy periods.
Skip if: You don’t want your period to disappear entirely.

Mirena was initially approved for women who’d already had children, but that’s just because those were the women recruited for the study submitted to the FDA. Doctors prescribe it to women without kids all the time and, in fact, the American College of Obstetricians and Gynecologists has recommended long-acting reversible contraception as the first-line method for adolescents since 2012.

Where ParaGard can make periods worse, a hormonal IUD could help improve painful periods — in fact, Mirena is also FDA-approved for the treatment of heavy menstrual bleeding, or menorrhagia. About 20 percent of women with a Mirena see their period stop after a year, as do a third of women who use it longer. Mirena is approved for five years but recent data says it’s effective for seven.

Best for: Women on a budget.
Skip if: You don’t want your period to disappear entirely.

This device is a pharmacologic equivalent to Mirena (it has the same total amount of hormones), but was developed to be less expensive for women visiting family planning clinics who are either on Medicaid or lack health insurance. It costs providers $50 and they can pass on savings to their patients. It’s not technically a generic because it looks a little different and releases slightly less hormone on a daily basis, though there is the same amount of hormone in the device. Still, about the same number of women reported amenorrhea (no periods) with Liletta as with Mirena (Liletta’s rate is slightly higher after three years).

It’s currently approved for three years but the manufacturer will be submitting five-year data to the FDA and will continue to study the same group of women for seven years. It’s possible that Liletta could last even longer than Mirena since the daily release is lower, but only further research can prove that.

Best for: Women who like the idea of a smaller IUD.
Skip if: You’re looking for a long-term commitment.

This device is approved for three years and is specifically marketed to women who haven’t had kids. It’s smaller than Mirena, which makes it more appealing to people who haven’t had their cervix dilated, but we’re talking about the difference of a few millimeters, says Kristyn Brandi, MD, family planning fellow at Boston Medical Center.

What is different is that it releases fewer hormones on a daily basis, meaning more women keep getting their periods on Skyla versus with Mirena — which is appealing if you would prefer to keep your normal bodily function intact, Dr. Brandi says. (Only about 6 percent of Skyla users stop getting their period after one year; 12 percent of users stop after three years.) That, and it’s only approved for three years. If you want contraception for longer, you should probably get a different IUD.

Best for: Women who want more than three years of use, and want to keep menstruating.
Skip if: You don’t have the patience to fight with your insurance.

Bayer, which manufactures Mirena and Skyla, developed this newest IUD which became available in October. Kyleena is approved for use in women regardless of whether they’ve had kids. It releases fewer hormones than Mirena, but more than Skyla, though it lasts the same amount of time as Mirena.

This device might be a better option for women who want five years of pregnancy prevention but would rather get their period than not. In the approval studies, about 12 percent of women stopped getting their periods after one year, and 20 percent did after three years. But beware: If you’re interested in Kyleena, it could be a hassle to get your insurance to pay for it for the next five to six months until the temporary billing code designated for new drugs and devices becomes a permanent one, Dr. MacIsaac says.

Here’s a handy chart with the dosing and approval length for each IUD. 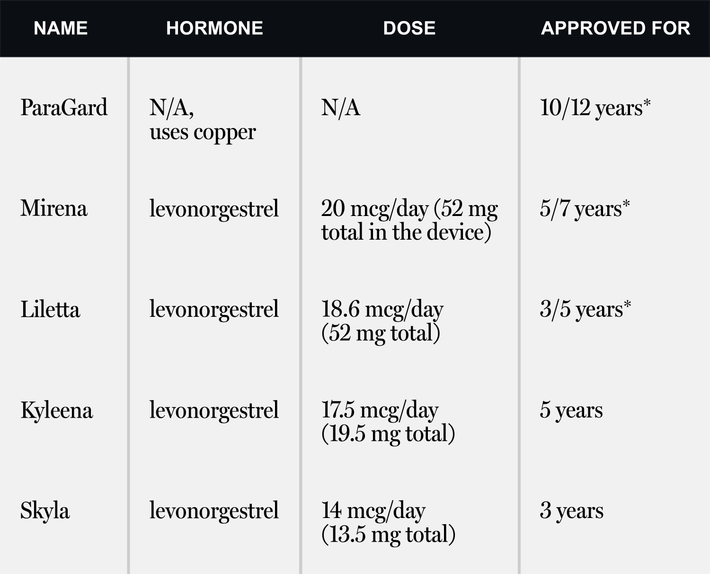 *Additional studies show that the devices are effective even longer than originally approved for: 12 years for ParaGard, seven years for Mirena, and five years for Liletta.

11 Questions to Ask Yourself Before Getting an IUD

Which IUD Should You Get?

gone sale-ing 1 min ago
I Didn’t Know Luxury Until I Got These Linen Sheets And they are currently 15 percent off.
q&a 11 mins ago
Is Somewhere Good the Future of Social Media? We spoke to Annika Hansteen-Izora, the designer of the app, about slowing down and truly connecting.
as told to 22 mins ago
How Teachers Talked About Uvalde With Their Students After the Texas school shooting, educators share their fears and frustrations.
By Bindu Bansinath
style 1:41 p.m.
The Best Looks From the Cannes Film Festival All hail the ball gown.
action item 1:15 p.m.
How to Help the Uvalde Community From supporting Robb Elementary School families to pressing for gun-control legislation.
gun control 1:06 p.m.
Jacinda Ardern’s Commencement Speech Could Not Be Timelier “We knew we needed significant gun reform, and so that is what we did,” New Zealand’s prime minister said.
q & a 12:36 p.m.
Meet Koa, the Beauty Brand Celebrating Hawaiian Culture The company is making it a priority to share the culture of Hawaii with the world.
celebrity 12:27 p.m.
Another Celeb Has Shared Their Thoughts on Depp v. Heard Dominic Fike said during a performance that he has “visions” of Amber Heard “beating me up.”
gun violence 12:24 p.m.
The Supreme Court May Be About to Expand Gun Rights Even More In June, the Court could rule New York’s concealed-carry-license regulations unconstitutional.
i tried it 12:00 p.m.
Can Reciting a Daily Mantra Make You Treat Yourself Better? For weeks, I’ve been repeating kind messages to my reflection.
what we know 11:45 a.m.
Texas School-Shooting Investigation Descends Into a Mess Officials give contradictory statements and parents say they were ignored and arrested trying to save their children.
father's day 10:28 a.m.
What Our Editors Are Gifting Their Dads Spoiler warning for Cut dads.
gun control 9:45 a.m.
The NRA Will Still Hold Its Conference in Texas This Weekend Ironically, attendees will not be allowed to bring guns to the event.
health 8:49 a.m.
The Baby-Formula Shortage Won’t Get Better Anytime Soon FDA commissioner Dr. Robert M. Califf said that shelves should be restocked by late July.
encounter 8:00 a.m.
The Hostess Who Kept Their Secret Grace Faison — the 97-year-old Brooklyn Heights fixture — opens up about secretly housing women seeking illegal abortions in the late ’60s.
By Eliza Gray
uvalde Yesterday at 9:04 p.m.
What We Know About the Police Response to the Uvalde Shooting Rep. Joaquin Castro has asked the FBI to investigate the police response to the school shooting.
lawsuits Yesterday at 6:30 p.m.
Amber Heard Says Her Defamation Trial Is ‘Humiliating’ and ‘Painful’ On the last day of testimony, Heard again denied claims from Team Depp that she lied and falsified evidence.
uvalde Yesterday at 6:27 p.m.
‘As Teachers, We’re Expected to Put Our Lives on the Line’ An educator near Uvalde feels the weight of the Texas school shooting.
in her shoes podcast Yesterday at 6:17 p.m.
The Slippery Slope Ahead As Roe v. Wade Is Challenged  New York’s Rebecca Traister on what’s possible in the fight for abortion rights.
By the Cut
gone sale-ing Yesterday at 6:14 p.m.
Let the Cut Be Your Personal Shopper for Memorial Day Deals We rounded up the best deals from Everlane, Nordstrom, Outdoor Voices, and more.
More Stories