For the person who would never store their priceless roses in a vase. Photo: Courtesy of Louis Vuitton

For the past two weeks I’ve been re-reading Crazy Rich Asians and its sequel, China Rich Girlfriend. Some of the most absurd (though completely pleasurable) scenes depict the obscenely wealthy characters as they spoil themselves with the most insane, over-the-top shopping sprees. Fly to Paris and buy a completely new haute couture wardrobe for the season? Oh, that’s just a typical girls’ shopping weekend. Drop a few million euros on a diamond ring the size of a golf ball? What else would you buy when you’re in a high-stakes mahjong game where the bets are made with priceless jewelry.

The best part is that these books are based on completely real people who regularly indulge in this kind of behavior. They’re the collectors who won’t hesitate to fly around the world in order to get their hands on the latest, hard-to-find items that never, ever, feature a price tag. Essentially, they’re the ones who will buy Louis Vuitton’s latest special project.

The custom boxes aren’t exactly the standard in-store merchandise — no regular person needs a massive container to house their Christmas decorations. But when a Singaporean billionaire has a massive collection of baccarat ornaments, they’re not going to wind up in a random cardboard box and thrown in a storage closet. Or if you’re the kind of guy who spends six figures on a bottle of whiskey, you’re going to want to show it off in a custom case. Maybe you just need a really, really special vase for some flowers?

From a boombox constructed out of the different types of Louis Vuitton leathers to a special shoe trunk to the debut of the Monogram Eclipse (a black-and-white version of the classic logo) luggage, the entire set is completely over-the-top and the stuff of rich people fantasies. Scroll ahead to see them all or visit them in real life at the NYC flagship, where they’ll be on display through the 20th. 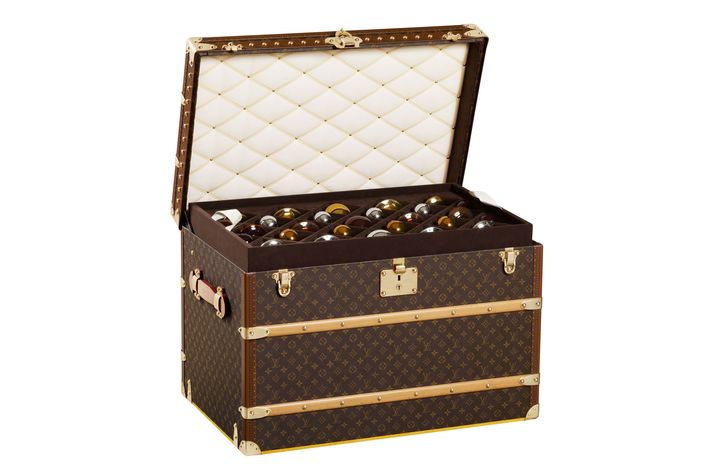 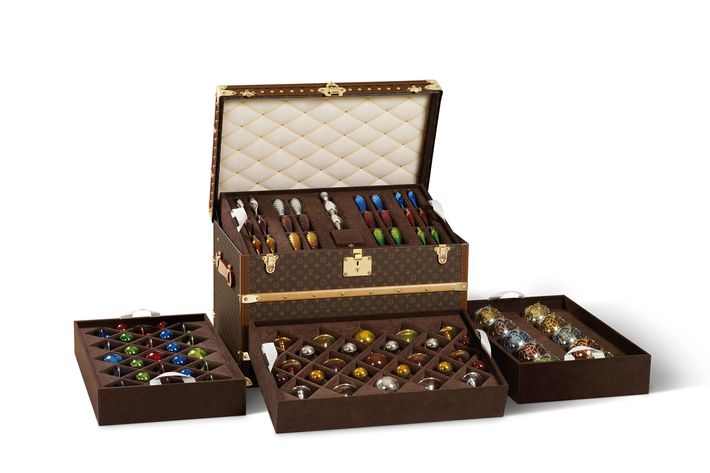 dream date 9:00 a.m.
A Hot Time With Harris Dickinson The Triangle of Sadness star reimagines what it means to be a modern man between sauna steams.
By Hanna Hanra
encounter 8:00 a.m.
17 Seconds With a Spotted Lanternfly Face-to-face with the stylish invasive species. So do I smoosh it or not?
By Matthew Schneier
at home in asian america 8:00 a.m.
For Domestic Workers, the Asian Class Divide Begins at Home Five nannies from the Philippines, Nepal, and China open up about what it’s like to work for their Asian American employers.
By Arya Sundaram
ambition 7:00 a.m.
Even Kelly Ripa Has to Deal With Sexist Bulls- - - at Work As the Live! host writes in her new collection of essays, seniority is a “masculine word.”
crime Yesterday at 5:19 p.m.
A Train Hit a Police Car With a Woman Handcuffed Inside She survived, though her attorney wonders why Colorado officers left their SUV parked directly on the tracks.
mfw spring 2023 Yesterday at 5:19 p.m.
The Best Street Style at Milan Fashion Week Chic looks from this fashionable city.
royals Yesterday at 4:43 p.m.
The Palace Is Reportedly Panicking About The Crown Again Royals are concerned the upcoming season will damage King Charles’s reputation.
all in the family Yesterday at 3:33 p.m.
Untangling the Secrets of a Teenage Mother We think of our parents as known quantities. But as Salon editor-in-chief Erin Keane writes in her memoir, Runaway, we rarely know the whole story.
mental health Yesterday at 3:15 p.m.
Megan Thee Stallion Wants to Help Hotties Get Therapy “Bad Bitches have bad days too.”
culture Yesterday at 11:57 a.m.
Why Is Hollywood Still So Obsessed With The Stepford Wives? Don’t Worry Darling wears its references to the cult classic on its sleeve.
review Yesterday at 11:52 a.m.
Does a New Designer Mean a New Direction? Not always. A mixed review of the debuts in Milan.
By Cathy Horyn
how i get it done Yesterday at 10:00 a.m.
How Über-Publicist Gia Kuan Gets It Done During Fashion Week “People would be shocked. It takes me maybe three minutes to deal with my makeup, do my hair, and get out the door.”
By Sangeeta Singh-Kurtz
celebrity babies Yesterday at 10:00 a.m.
Another Baldwin Has Arrived Hilaria announced the arrival of the couple’s seventh child.
divorce rumors Yesterday at 9:57 a.m.
Gisele Bündchen Isn’t Thrilled With Tom Brady’s Decision to Un-Retire She appears to have skipped his first home game of the season.
bffs Yesterday at 9:00 a.m.
Can a Childhood Friendship Really Last a Lifetime? In Best of Friends, novelist Kamila Shamsie attempts to find out.
life after roe Yesterday at 8:00 a.m.
The Abortion Crisis Manager Oriaku Njoku spent years fighting for patients in the South. Who else could lead abortion funds into the post-Roe world?
By Andrea González-Ramírez
how i get it done Yesterday at 7:00 a.m.
Ana Fabrega Was Supposed to Work in Finance, Not Comedy Fortunately for us Los Espookys fans, she pivoted.
By Max Gao
astrology Sept. 25, 2022
Madame Clairevoyant: Horoscopes for the Week of September 26 Late Thursday night, Venus enters Libra, lending added support to your Libra-season quest for social harmony.
By Claire Comstock-Gay
sex diaries Sept. 25, 2022
The Event Planner Whose Chef Boyfriend Wants More Sex This week’s sex diary.
culture Sept. 25, 2022
Rihanna is Going to Make Us All Watch the Super Bowl The singer will headline the 2023 Super Bowl Halftime Show.
More Stories