Just about every available indicator suggests that transgender people fare worse than cisgender ones when it comes to a variety of outcomes, ranging from housing to health to violence victimization. The problem is that in some cases, those indicators are fairly imprecise — researchers still don’t have great data about trans people and their needs. Because there aren’t a huge number of trans people and many of them have very real reasons not to announce their identity to the world, it can be a tough population to survey in methodologically rigorous ways.

But researchers at the National Center for Transgender Equality took an important step last week when they released the 2015 U.S. Transgender Survey, an in-depth survey of “27,715 respondents from all fifty states, the District of Columbia, American Samoa, Guam, Puerto Rico, and U.S. military bases overseas.” It’s the largest-ever survey of trans people in the U.S., and it offers a lot of valuable information — albeit mostly of the depressing and heartbreaking variety.

Some of those specifics are touched upon in this video of the survey’s release event, where the authors take questions and go into some detail about what they found:

Definitely read the whole executive summary if you are interested in knowing more about what it’s like to be trans in the U.S. — it isn’t that long — but here are a few things that stood out. (It should be said that none of what follows will come as a major surprise to those who follow trans issues, but still, it’s useful to have some numbers.) As you’re reading, keep in mind that this survey did have some important limitations, which I’ll run down toward the end of this post. 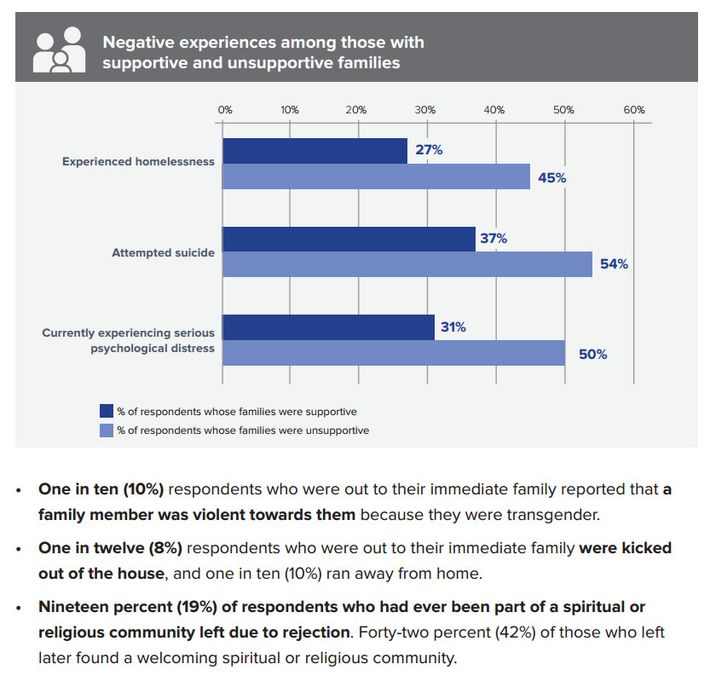 You can’t establish direct causality from a survey like this. The above graph could, for example, be explained by something like: Trans people who are more gender-nonconforming or have worse mental health (to take two examples) are also more likely to be rejected by their parents, and also more likely, independent of parental rejection, to have worse outcomes. In other words, maybe it’s hidden variables, not parental support, driving the results above.

Still, it makes a lot of sense to think that parental support, on its own, is a vitally important variable. It also jibes with a mountain of anecdotal evidence, since if you talk to trans people or go to trans websites and forums you will hear and read story after heartbreaking story of parental rejection. If you’re a young trans person dealing with all the school and/or workplace difficulties that entails, and you have something of a safe harbor in your home and your parents, it stands to reason that that could go a long way toward protecting you from some of the worst things the world might throw at you.

Bathroom access is a pressing everyday concern for many trans people 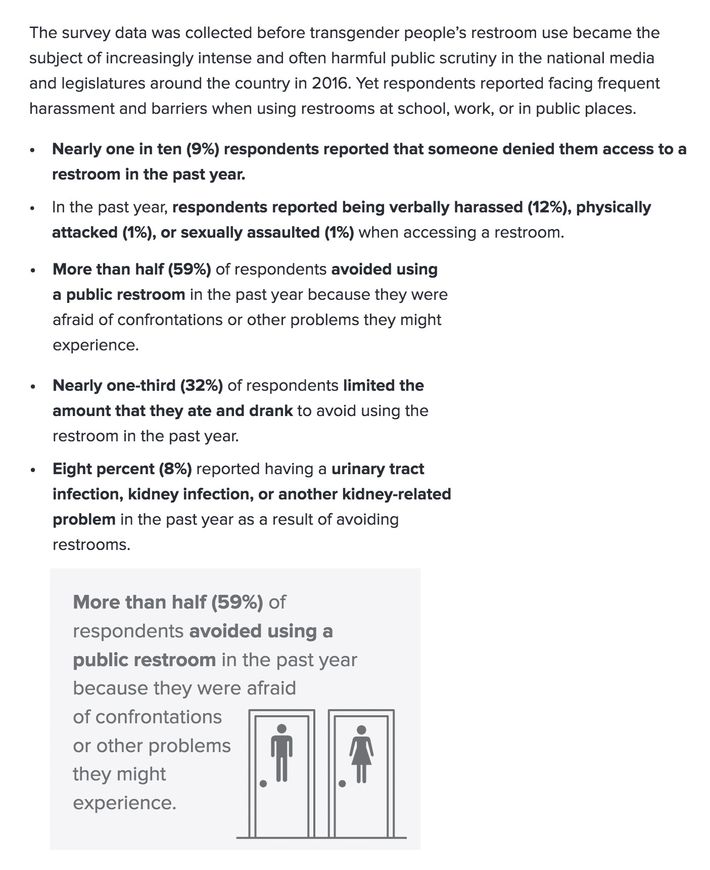 Trans people are faced with the potential of traumatic events like parental rejection, yes, but are also saddled with a huge amount of day-to-day baggage, an endless parade of stressors cisgender people don’t generally have to deal with. Foremost among them is the search for safe bathrooms. It’s shocking that a third of trans people have to actively monitor what they eat and drink out of concern for what might happen if they need to use a public restroom.

Trans people still have a really rough time at school 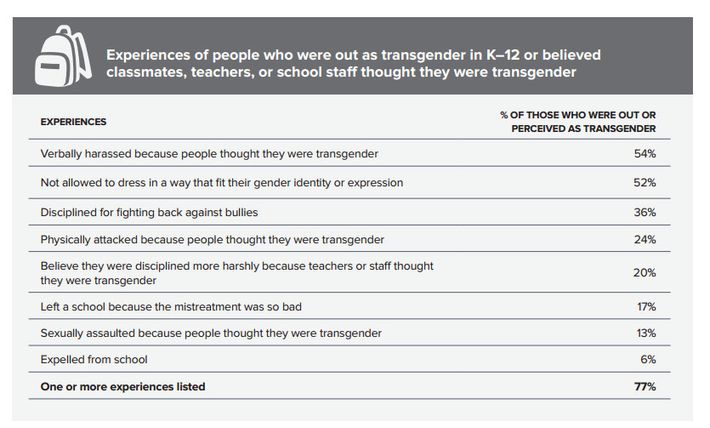 Recently, a Centers for Disease Control and Prevention survey found that LGBT youth reporting distressingly high rates of violence victimization, mental illness, and suicide attempts. That study didn’t ask respondents about their gender identity, but the USTS findings suggest that trans youth are indeed facing the same difficulties as the broader LGBT population. As with the bathroom issue, these findings contribute to the sense that trans people are constantly navigating a minefield of difficulties and challenges invisible to people who are comfortable with their natal sex.

As for those aforementioned limitations, in an email, Mara Keisling, survey manager at the National Center for Transgender Equality and a co-author of this survey, laid out some of the challenges of conducting representative surveys of trans people in the U.S.:

Because the federal government and other key researchers have not sufficiently studied transgender people, we actually do not have a solid sense of the demographics of the whole transgender community. We do know that this USTS survey has a geographic distribution that looks quite a lot like America, so that’s a good sign about this sample. There are interesting surveys coming out soon that are part of population-based random samples where participants who identified as transgender are then studied in a separate study. That seems to be our best chance of a representative sample. There are lots of reasons why conducting a more straightforward sample of transgender people is not likely in the foreseeable future.

In other words, researchers don’t know what the true percentage of (for example) African-American trans people is relative to the total number of American trans people, so they don’t know what a representative sample would even look like. “Although the intention was to recruit a sample that was as representative as possible of transgender people in the U.S.,” the authors explain in the full survey write-up, “it is important to note that respondents in this study were not randomly sampled and the actual population characteristics of transgender people in the U.S. are not known. Therefore, it is not appropriate to generalize the findings in this study to all transgender people.”

That is, because the survey was posted online and publicized, rather than administered to a randomly chosen subset of the trans population, those trans people who chose to take it might be different, in meaningful ways, from the broader trans population. (Off the top of my head, I think it’s fair to speculate that folks drawn to a survey like this would be likely to be more politically engaged and/or involved in activism, though there’s no way to know for sure.)

Most importantly, this limitation makes it hard to compare percentages between this survey and nationally representative surveys of the broader U.S. population. On the other hand, it would be very difficult to get a nationally representative sample of the trans population through normal survey methods — to make a rough and oversimplified estimate, if trans people are one percent of the population (and will always openly admit to being so to random pollsters who call them), you would need to make more than 2.7 million random calls to Americans to get a random sample of this size. So the USTS isn’t perfect, no, but can still tell a solid amount about this population’s challenges and needs, especially given how high some of the more alarming numbers are.