Kristen Stewart — like all of us — has had a hell of a year. For starters, she turned 26 this year, which is the most improbable fact I’ve ever heard in my entire life. Second — she starred in four movies: two critically acclaimed, one critically divisive, and one directed by a person of dubious moral character. She also reportedly dated four different women — Soko, Alicia Cargile, St. Vincent, and Stella Maxwell — with a combined wealth between them of 600 pairs of black Old Skool Vans.

This year, French filmmaker Olivier Assayas called Stewart “the best actress of her generation,” adding, “She has an inner depth coupled with a spontaneity and naturalness that sets her apart.” Hey — that’s a great point. What a year it’s been for Kristen, a person who was legitimately born in 1990.

But the defining feature of Stewart’s character has always been her distaste for public life and celebrity, and this year she made no effort to keep those feelings a secret. Perhaps — once again, like all of us — 2016 was the year she felt like enough was enough. Take inspiration from the many ways Kristen Stewart gave the finger this year, and remember: When there are no words, flipping the bird can do the job for you. 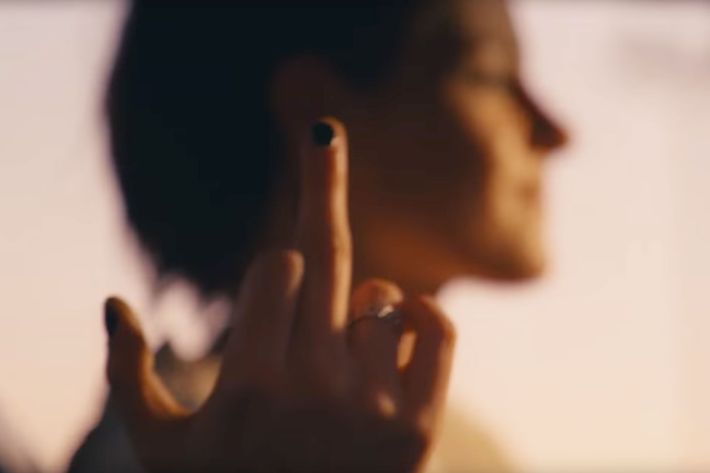 A blurred middle finger that you know is still Kristen.

A middle finger in the back of a car.

An “are you kidding me?” middle finger.

A guest middle finger from Kristen’s ex, Soko the Cat.

The jaunty middle finger with a St. Vincent behind.

A Year of Kristen Stewart Giving the Middle Finger

crime Yesterday at 9:49 a.m.
They Thought They Were Lucky to Get an Appointment Dr. Joseph Silverman was renowned for treating young girls with anorexia. But patients in his care allege he raped them repeatedly.
parties! July 30, 2021
The Bestest Party Looks of the Week Christopher Meloni in a paisley shirt. Need I say more?
recommended by experts July 30, 2021
What’s the Best Pillow for Side Sleepers? You might want to wake up for this, side sleepers.
By Jason Chen, Karen Iorio Adelson, and Ambar Pardilla
style July 30, 2021
A T-Shirt That Celebrates Black Queer Mothers With proceeds benefiting Planned Parenthood.
tokyo olympics July 30, 2021
Simone Biles Isn’t Sure If She’ll Compete Again in Tokyo Ahead of next week’s event finals, the gymnast says she’s still struggling with “the twisties.”
friday sales July 30, 2021
20 Things on Sale You’ll Actually Want to Buy: From Calvin Klein to Champion Including Billie Eilish on vinyl, some under-$20 hoops, and a chiropractor-recommended foam roller.
power July 30, 2021
Amanda Knox Calls Out Stillwater for Using Her Story “Why does my name refer to events I had no hand in?”
beauty interview July 30, 2021
Helen Mirren Has Swagger and She Wants That For You Too Talking to the actor and L’Oréal Paris spokesperson about what makes her feel most beautiful.
sports! July 30, 2021
The Best Things We’ve Seen at the Olympics So Far A swim coach horny for gold, teens shredding the skateboarding category, and more.
are u coming? July 30, 2021
12 Hours on the Hunt for Daddies in Fire Island An up-all-night trip to the Pines Party with no place to stay and an Instagay I barely knew.
mamma mia July 30, 2021
Today, We Are All Gucci The House of Gucci trailer is finally here.
closings July 30, 2021
Avenue B’s Queen of Latex Is Abdicating the Throne The Baroness is closing shop.
a beautiful life July 30, 2021
The Drag Queen Who Uses Makeup to Feel Invincible Talking to Kim Chi about her beauty brand, affordable products, and fame.
hot bod July 30, 2021
Yet Another Indignity for Olympic Athletes Why do we subject them to these interviews moments after competing?
style July 30, 2021
The Pursuit of Love Brings Studio 54 to World War II Emily Mortimer and Sinéad Kidao on how ‘70s rock looks a lot like the 1930s
¡hola papi! July 30, 2021
‘Help! I Have No Clue How to Act in a Relationship.’ It’s less important to avoid saying the wrong thing 100 percent of the time, and more important that you navigate those missteps with respect.
By J.P. Brammer
culture July 29, 2021
A Show of Strength Simone Biles proved how courageous she is, even if it wasn’t in the way we expected.
explainer July 29, 2021
I’m Vaccinated. Should I Be Worried About the Delta Variant? What we know about breakthrough cases and the most contagious COVID strain yet.
how i get it done July 29, 2021
A Night in Malibu With Cynthia Erivo and Lindsay Peoples Wagner And the chicest millennial pink Porsche.
absolutely not July 29, 2021
Who Wants Some Cursed Old Cake? A slice of Princess Diana and Prince Charles’s 40-year-old wedding cake is up for auction.
More Stories