There’s no denying that the massive wave of Muslim migration into Europe from the Middle East and North Africa, much of it the result of violent conflict in places like Syria, has had a profound effect on the region’s politics. Among other things, it has sparked a major backlash, empowering far-right groups and their bigoted messages all over the continent.

What’s interesting is that while it’s certainly the case that there are a lot more Muslims in many European countries than there were just a short time ago, a survey from Ipsos Mori shows that residents of those countries — and others, including the U.S. — are overestimating, by a large margin, just how many Muslims there are.

A helpful chart from the Guardian’s write-up runs down some of the numbers: 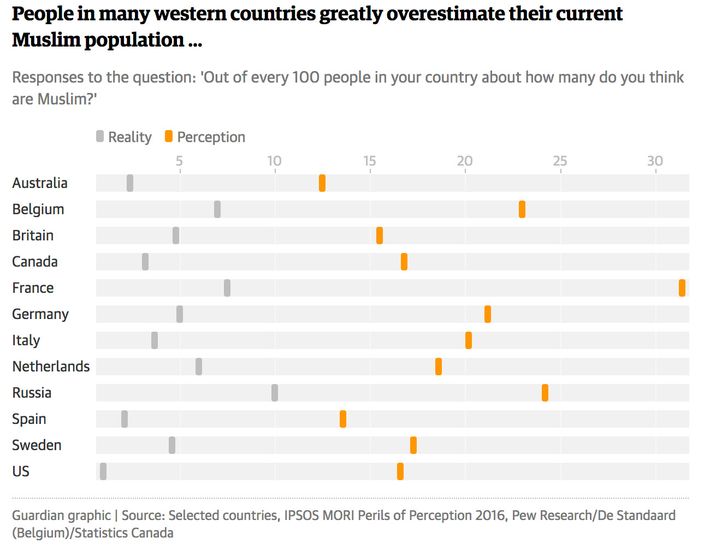 The Guardian notes that when the surveyors asked people to estimate what percentage of the population would be Muslim in 2020, respondents made the same mistake, but more so: There, the gap between perception and (projected) reality was even larger. People are not only overestimating how many Muslims there are now, they’re also overestimating the Muslim population’s growth rate.

This sort of overestimation appears to be fairly common, regardless of the minority group in question. In the Anti-Defamation League’s 2015 annual survey of anti-Semitic attitudes around the world, for example, it noted that “30 percent [of respondents] believe Jews make up between 1 to 10 percent of the world’s population. Another 18 percent believe Jews make up more than 10 percent of the world’s population. Sixteen percent (16%) responded less than 1 percent.”

Here were the results for a handful of countries: 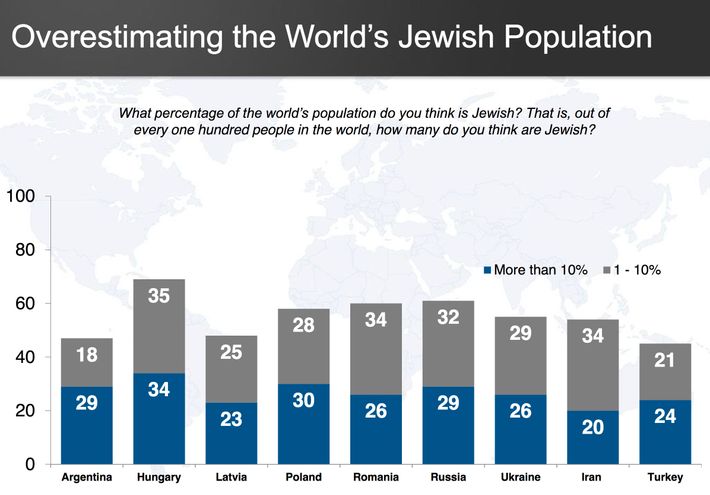 In reality, Jews make up 0.19 percent of the world population, so a lot of people are wildly overestimating here.

Or take Americans being asked about immigrants more broadly (for many Americans, “immigrants” likely means “Mexicans”). Take an Ipsos poll from 2015. As Ana Swanson reported in the Washington Post in September, “surveyed Americans guessed that one-third of people in their country were immigrants. The actual figure? Only 14 percent.” As she pointed out, the residents of lots of other countries do this, too, as nicely demonstrated by a chart of Ipsos data put together by the data blog Metrocosm: 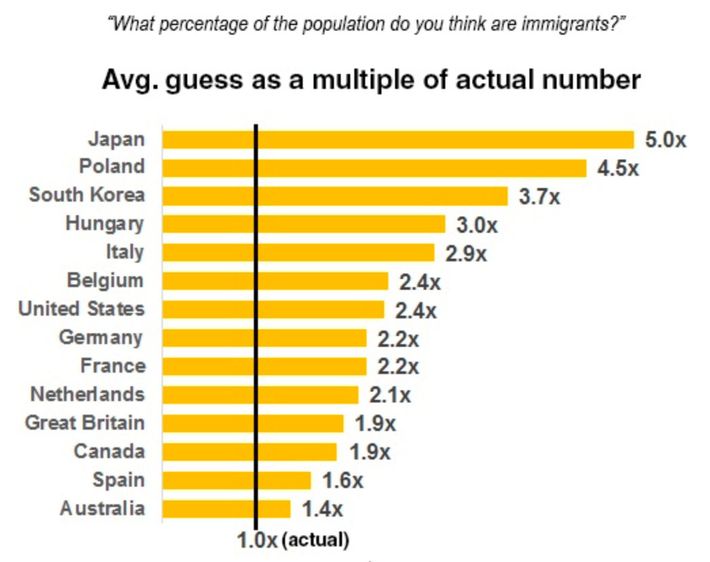 Why does this happen? There’s no one answer. Surely different mechanisms are at work in different countries. In some cases, especially instances of multiple-choice responses, it might simply be an artifact of how the question is phrased. But more broadly, I’m tempted to turn, as I often do, to the well-known biases and heuristics that influence human thoughts. Here the so-called availability heuristic is playing an outsize role, I bet. It states simply that the easier it is for you to think of an example of something, the more likely you are to estimate its prevalence.

Except here the “thing” is actually a type of person. In many cases, members of minority groups look or dress or speak differently than the majority group — they stand out in certain ways. So if I ask you what percentage of your country is immigrants, and it’s easy for you to think of examples of immigrants you’ve encountered because of the distinctive (from a majority perspective) way they present themselves, that will likely skew your estimate upward. (I’d say this theory looks pretty good for Japan, which is at the top of the list above — it is known to be a very closed and, in certain ways, culturally homogeneous society, meaning immigrants are probably more likely to stand out — but things get fuzzier for countries like Poland.)

But perhaps that’s too innocent an explanation of how the availability heuristic works here, given that all over the world, demagogues bash immigrants and other minority groups. In the U.S., for example, we’ve heard a ton from Donald Trump and other politicians and pundits about how dangerous Mexican immigrants are (they’re “rapists,” they’re job-stealers, and so on). It’s no accident, given the constant fear-mongering about Mexican immigrants that few Americans realize that since around 2009, the flow of Mexican migrants has been out of the U.S. and back to Mexico.

So it’s only natural that if you’ve heard a lot about how dangerous or subversive a group is, and a pollster comes around to ask you to guess how many members of that group there are, you’re going to overestimate. This is a useful example of the gut-instinct-first, rationalize-later way a lot of thinking works: “I’m worried about this group, so there must be a lot of them!” It’s a safe bet that this is part of what’s going on in Europe, where citizens are awash in anti-Muslim messaging (though it should also be acknowledged that any major wave of migration, Muslim or not, brings with it legitimate problems, including various forms of inter-group conflict and strains on social safety nets). Plus, in many cases, people’s views on Muslims as a whole are affected by the horrific attacks carried out by fringe groups like ISIS. So, since France has been hit harder than anyone by ISIS terror attacks lately, perhaps it shouldn’t be a surprise that the French have the most out-of-whack perception of their nation’s Muslim population relative to the true figure.

These sorts of overestimates matter, because they make it easier for people to imbibe all sorts of bigoted messages: This group is coming for you and your family, they’re taking all the jobs, they don’t believe in our way of life, they secretly control everything, and so on. To realize that certain groups just aren’t that big is to blunt the potential impact of some of these harmful messages. Unfortunately, people just aren’t very good with numbers — particularly when they’re scared or angry.

Many People Are Overestimating How Many Muslims There Are

5 questions with... 5:10 p.m.
Taraji P. Henson Wants to Move to Spain, Italy, or the South of France “Yeah, ’cause … I don’t know about this place anymore.”
celebrity 5:04 p.m.
Chris Pratt, Noted Bible Quoter, Says He’s Not Religious “I’m not a religious person,” says the man who posts Bible verses on Instagram.
gone sale-ing 4:15 p.m.
Ulta Beauty Is Doing a Sale It’s Never Done Your favorite hair products are on sale thanks to its Summer of Hair Love Event.
maxwell trial 2:42 p.m.
Ghislaine Maxwell Sentenced to 20 Years in Prison The judge ruled that Maxwell “directly and repeatedly and over the course of many years participated in a horrific scheme” of sexual abuse.
life after roe 2:40 p.m.
Major Retailers Are Rationing Morning-After Pills Purchase limits on Plan B are the latest ripple effect of the SCOTUS ruling overturning Roe.
gone sale-ing 2:22 p.m.
Your July 4 Sale Shopping Guide That NuFACE you wanted? It’s on sale.
immigration 1:39 p.m.
46 Migrants Were Found Dead in a Truck Near San Antonio Officials suggested they had overheated in a tractor trailer after being abandoned by the truck’s driver.
abortion 1:18 p.m.
Laura Prepon Recalls Her Choice to Terminate a Pregnancy “Everyone has their own story for seeking out this medical procedure.”
drugs 1:00 p.m.
Tripping Down the Aisle Mushroom microdoses are the new signature cocktails.
By Jenni Avins
abortion 12:10 p.m.
Another GOP Candidate Fails to Understand Rape, Possibly Also Sex Yesli Vega claimed that rape rarely results in pregnancy because “it’s not something that’s happening organically.”
ask a boss 12:00 p.m.
‘The New Hires at Work Are Driving Me Up a Wall’ Clarifying for yourself what you do and don’t need to act on will help make the situation more bearable.
huh! 9:58 a.m.
Ghislaine Maxwell Reportedly Offered Yoga Lessons in Prison A letter written by a fellow detainee characterized the convicted sex offender as “genuine and kind.”
life after roe 9:30 a.m.
How to Protect Yourself When Seeking an Abortion Learn your legal risks and take control of your digital privacy.
life after roe 9:30 a.m.
Don’t Trust the DIY Abortion Advice You See on TikTok These are the risks involved.
life after roe 9:30 a.m.
How to Have a Medication Abortion Where to find the pill and what to expect.
life after roe 9:30 a.m.
The Crisis Pregnancy Center Trap And how not to fall for it.
life after roe 9:30 a.m.
How to Get Help for Your Abortion The abortion mutual-aid network getting patients the funds, travel, and child-care assistance they need.
celebrity Yesterday at 5:45 p.m.
Jodie Sweetin Won’t Let Police Brutality Stop Her From Protesting The actor spoke out about the viral video of police pushing her to the ground during an abortion-rights protest.
celebrity Yesterday at 5:11 p.m.
Machine Gun Kelly Reveals He Attempted Suicide in New Documentary He was on the phone with Megan Fox at the time.
power Yesterday at 3:50 p.m.
Everything to Know About the WNBA Star in Russian Custody After her months in detention, Brittney Griner’s trial will begin on July 1.
More Stories