It’s intuitive that when a human being is going through a rough patch, they’re going to use words that connote how miserable they feel; when your candidate loses a presidential election, you’re not going to walk around declaring how sparkly and beautiful life is. The same, evidently, is true of a nation as a whole — or at least of the United States.

This is the fascinating, oddly comforting finding from a paper out this month in Proceedings of the National Academy of Sciences. A team led by Stanford data analyst Rumen Iliev found that big swings in the national experience — like from war to peace or prosperity to poverty — are reflected in the text words that are published in books and newspapers. And it goes back centuries.

To track the emotional content of words, the researchers used the Linguistic Inquiry and Word-Count dictionary (LIWC), which has 907 words and stems. Entries in the positive category include “relief,” “helpful,” and “grace,” while negative ones are “fear,” “lost,” “overwhelm,” and the like.

They then paired that with two text corpuses: Google’s digital-book archive, spanning 192 billion words in 1.3 million books from 1800 to 2000, and the New York Times’ archive of 14.9 million articles from 1851 to 2015. From there, they measured all those words against big historical trends — the most compelling of which concern war and money.

The below chart shows the results of measuring those happiness levels against military casualties, as tracked by the U.S. Department of Veterans Affairs. The more soldiers were dying on average a year (the dashed line), the more negative the word choice (the solid line). Note the contrasting spikes that mark the Civil War (1861–1865), World War I (1914–1918), and World War II (1939–1945). 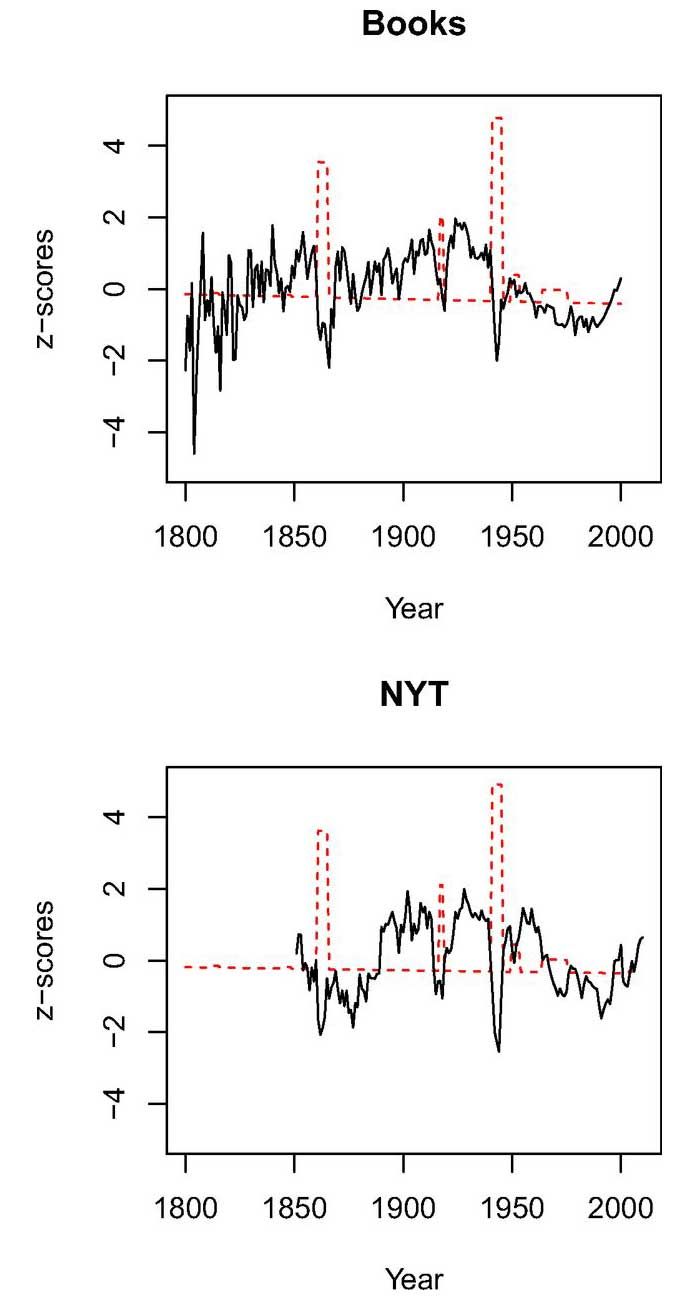 Next up was economics. The researchers used Okun’s Misery Index, which combines unemployment and inflation rates to get a clearer picture of how much the economy is screwing the average person. The researchers found, true to form, that the higher the economic misery, the worse the mood in books and in the paper of record. In the below graph, the solid lines are the linguistic positivity and the dashed are the misery index. 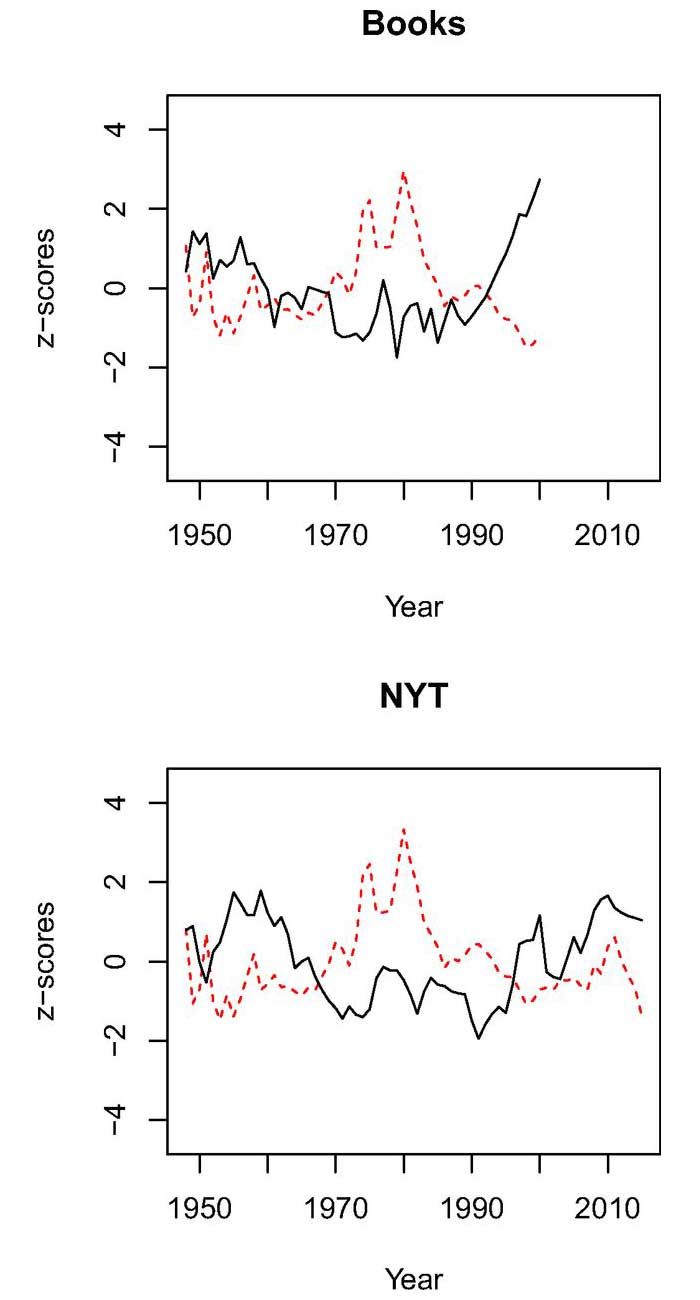 There are some limits to this study, namely that given how ever-changing word usage is, it’s impossible to make apples-to-apples comparisons of the emotional weight of the all words over time. As Penn linguist Mark Liberman, who was not involved in the study, told the Times, a tool like the LIWC misses that shift in meaning — awesome used to mean “daunting,” and now it means “totally rad.” For a case study in what linguists call semantic shift, consider the divergent evolution of “like.” Still, Iliev and his colleagues argue that while “semantic drift might contribute noise” to their analysis, it’s not enough to create a systemic problem with their work.

What’s awesome (in both senses) about this kind of research is that it shows how much We’re All in This Together: If there’s one thing America has been shown to agree on, it’s how much everything is terrible.

When American Mood Darkens, So Does the Nation’s Vocabulary

parties! Feb. 3, 2023
Pauline Chalamet, Tessa Thompson, and More of the Bestest Party Pics This Week Partying with Guerlain, Marni, and more.
life after roe Feb. 3, 2023
The Future of Abortion Pills Is on the Line One Trump-appointed judge holds the power to effectively ban medication abortion even though the U.S. approves its use up to ten weeks into pregnancy.
spring fashion Feb. 3, 2023
Ella Emhoff’s Other Plus One Her always-present Secret Service detail.
style Feb. 3, 2023
At Marc Jacobs, a Generous, Life-Enhancing Fashion History Lesson The designer’s latest show, “Heroes,” celebrated the the late Vivienne Westwood.
in memoriam Feb. 3, 2023
Paco Rabanne Has Died The revolutionary fashion designer was 88.
spring fashion Feb. 3, 2023
11 Spring Bags, From $7 to $7,900 This season’s most compelling bags, from Forever 21 to Hermès.
best in class Feb. 3, 2023
16 of the Very Best Water Bottles Always be hydrating.
By Emma Wartzman
valentine's day Feb. 3, 2023
The 21 Best Last-Minute Valentine’s Day Gifts Where and when to get them.
friday sales Feb. 3, 2023
20 Things on Sale You’ll Actually Want to Buy: From Klorane to Patagonia Including a heart-shaped mini waffle maker, our favorite cream-blush stick, and a moisturizer packed with snail mucin.
valentine's day Feb. 3, 2023
19 Nontraditional Valentine’s Day Gifts Give something unexpected this February 14.
spring fashion Feb. 3, 2023
Mei Kawajiri’s Very Extreme Nails  Her completely over-the-top talons landed her features in magazines and gigs backstage for Marc Jacobs, Tom Ford, Miu Miu, and Moschino.
By Maya Allen
fashion Feb. 3, 2023
Do Not Show Up Late to the Marc Jacobs Show Lourdes Leon was apparently denied entry for arriving after the doors closed.
keeping up with the royals Feb. 3, 2023
Will Harry and Meghan Get to Go to the Coronation? Sources suspect they’ll be invited; whether or not they accept is another question.
q & a Feb. 3, 2023
Rachel Bilson Has Some Notes for The Bachelor The Accused actress and podcast host also talked about reuniting with her O.C. co-star Mischa Barton.
a choice? Feb. 3, 2023
What Is Going On With Austin Butler’s Voice? I fear he may be stuck talking like Elvis forever.
extremely online Feb. 3, 2023
I Can’t Shut Up About About Nancy Pelosi’s Hot-Dog Diet The former House Speaker also endorses ice cream for breakfast.
spring fashion Feb. 3, 2023
The Woman Who Became McQueen The quiet ascendance of Sarah Burton.
By Cathy Horyn
culture Feb. 3, 2023
This Is Pamela, Finally The model-actress’s memoir and documentary reveal only what she wants us to know. It’s about time.
By Roxane Gay
the wedding files Feb. 3, 2023
At Georgia O’Keeffe’s Ghost Ranch, an ‘Epic’ Wedding No speeches, just dancing.
By Kaitlin Menza
¡hola papi! Feb. 3, 2023
‘I Feel Abandoned by My Friend’ Hopefully the two of you can have a productive conversation that leaves you both in a healthier place.
By J.P. Brammer
More Stories